Please ensure Javascript is enabled for purposes of website accessibility
Log In Help Join The Motley Fool
Free Article Join Over 1 Million Premium Members And Get More In-Depth Stock Guidance and Research
By Blake Bos - Updated Oct 5, 2018 at 11:48AM

The No. 1 state for motorcycles is a no-brainer, but second and third may come as a shock.

As of the most recent report by the Department of Transportation, there were 8,410,255 motorcycles registered in the United States by private citizens and commercial organizations in 2011. To put this staggering number into perspective, out of every 36 people you meet in the U.S., one of them probably has a motorcycle. For ranking purposes, we won't be looking at total bikes in a state, but rather people per motorcycle (the lower the number, the more common bikes are). So what states in America have the most die-hard moto-enthusiasts?

3. Our liberties we prize and our rights we will maintain -- Iowa
Iowa comes in third with 18 people for every motorcycle, beating the national average by 50%. In 2011 the state had 172,929 motorcycles registered, representing 2.1% of all motorcycles in America. Iowa is also home to production of Polaris' (PII 1.55%) Victory and Indian brands, and has the famous Iowa Grand Motorcycle Rally. This Midwest state's wide-open spaces make for a perfect landscape for Polaris' and Harley-Davidson's (HOG 3.16%) famous cruisers. 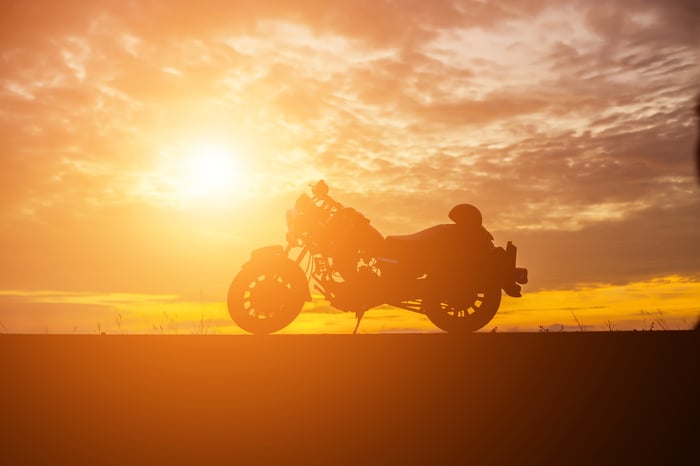 2. Live free or die -- New Hampshire
New Hampshire comes in second with 17 people for every motorcycle beating the national average by 53%. In 2011 the state had 79,266 motorcycles registered, representing 0.94% of all motorcycles in America. New Hampshire also happens to be one of 31 states without a mandatory helmet law.

The state is also home to Laconia Motorcycle Week, which dates back to the early 1900s and is one of the countries oldest rallies. Some sources quote attendance as high 300,000-400,000 bikers for this rally, and it is frequently ranked as one of the best rallies in the country.

The combination of no helmets, great natural terrain, and the famous Laconia Motorcycle Week make New Hampshire a top spot for motorcycle enthusiasts.

1. Under God the people rule -- South Dakota
South Dakota comes in first with 12 people for every motorcycle beating the national average by 66%. In 2011 the state had 69,284 motorcycles registered, representing 0.82% of all motorcycles in America. South Dakota is famous for the Sturgis Motorcycle Rally, which attracted 467,338 riders in 2013.

With 77% of surveyed riders riding a Harley-Davidson, this event is crucial for Harley to not only show off its newest products, but also to monitor its core customer. Investors in Polaris and Harley Davidson would do well to monitor how their brand's present themselves at Sturgis to see if they're gaining market share or losing it.

Since South Dakota hosts the country's largest motorcycle rally and has a small population, it's no surprise this rather thinly populated state takes the No. 1 spot.

Wrapping up the 50 top states
In 2011 the Department of Transportation began more accurately collecting data for states, so for the first time motorcycle enthusiasts can truly see in which states they have the greatest chance of passing by a fellow rider. For the motorcycle companies this data gives them valuable information on where they can most easily reach the greatest amount of riders and customers.

For a complete list of the most popular states for bikes, please scroll down.

Blake Bos has no position in any stocks mentioned. The Motley Fool recommends Polaris Industries. Try any of our Foolish newsletter services free for 30 days. We Fools may not all hold the same opinions, but we all believe that considering a diverse range of insights makes us better investors. The Motley Fool has a disclosure policy.