Amarin, Dendreon, and Prosensa are three biotech stocks which should be avoided at all costs. Here’s why.

Editor's Note: A clarification was made regarding the clinical trials of three competing prostate cancer drugs.

In the stock market, everyone loves a great turnaround story. In the biotech sector, where companies can rally or plunge by the double-digits on an FDA approval or rejection, bottom-fishing investors love to search for broken stocks with overlooked positive catalysts around the corner.

However, these three biotech stocks -- Amarin (AMRN 2.52%), Dendreon (NASDAQ: DNDN), Prosensa (NASDAQ: RNA) -- don't fit that category at all. Read on to understand why these dogs of the sector should never be mistaken as underdogs.

Amarin: Sit tight until 2017, dear investors...
Amarin's chances for a turnaround in 2014 went from minimal to non-existent after the FDA rejected the company's request to reconsider its October 2013 decision to rescind its ANCHOR clinical trial SPA (Special Protocol Assessment) on January 21.

That decision shattered Amarin's last hope at pursuing the critical ANCHOR indication for its only marketed drug, the fish oil treatment Vascepa. Vascepa was approved in 2012 to treat "severe" hypertriglyceridemia (triglyceride levels equal to or higher than 500 mg/DL) in patients not taking statins. The ANCHOR indication would have expanded Vascepa to patients with "elevated" hypertriglyceridemia (equal to or higher than 200 mg/DL but less than 500 mg/DL) who were also taking statins -- which would have helped it reach roughly 20% of the U.S. population.

More importantly, it would have helped it escape competition from GlaxoSmithKline's (GSK 0.91%) Lovaza, the leading fish oil treatment for severe hypertriglyceridemia. Lovaza, which was approved in the U.S. in 2004, generated $917 million in fiscal 2013 sales compared to $16.2 million in Vascepa sales in the three quarters since the drug's U.S. launch in January 2013. 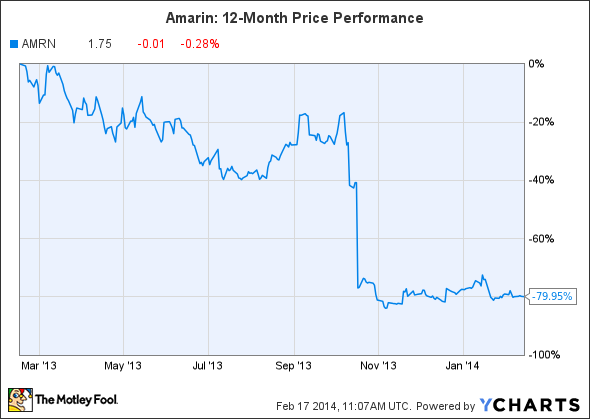 Although Vascepa notably does not raise "bad" LDL cholesterol levels as Lovaza does, it hit the market far too late and couldn't match GSK's marketing muscle. To make matters worse, a generic version of Lovaza could arrive in early 2015 and erode sales of both drugs. Those factors make Wall Street's original peak sales estimates of $1 billion to $2 billion for Vascepa look absurd.

Amarin's financials also don't look like they're built to last. The company finished last quarter with $225.9 million in cash and equivalents and $239.8 million in debt. It notably issued additional ADR shares in July 2013 to raise $121.2 million, but it still reported a negative operating cash flow of $201.0 million over the past 12 months.

The only real catalyst for this stock won't arrive until 2017, when it announces the outcome of the phase 3 REDUCE-IT trial testing Vascepa for cardiovascular events. That's a long time to wait for an announcement that could ultimately amount to nothing.

Dendreon: The cautionary tale that gets worse by the year...
Meanwhile, Dendreon, the maker of the metastatic prostate cancer drug Provenge, has become a cautionary tale in putting too much faith in Wall Street's peak sales projections. Back in 2010, analysts forecast that Provenge could hit peak sales of $3 billion to $4 billion. Take a look at sales of Dendreon over the past year to see what went wrong:

A total of $284 million in Provenge sales in fiscal 2013 is a far cry from Wall Street's blockbuster estimates, and also represents a disappointing 13% decline from fiscal 2012.

To make matters worse, two major competing treatments -- Johnson & Johnson's (NYSE: JNJ) Zytiga and Astellas/Medivation's (NASDAQ: MDVN) Xtandi -- were later approved in the U.S. and Europe. Both drugs quickly gained favor over Provenge, since both drugs were orally administered in contrast to Provenge's intravenous injections, and both drugs demonstrated higher efficacy rates during clinical trials. Compared to a placebo, Zytiga and Xtandi respectively demonstrated median extensions of life of 4.6 and 4.8 months, compared to 4.1 months for Provenge. However, this isn't a perfect apples to apples comparison, since Zytiga and Xtandi's data came from patients who already received chemotherapy, while Provenge was tested pre-chemo.

The one smidgen of good news that Dendreon received last year was the approval of Provenge in the EU in September. The company then inked a two-year deal with PharmaCell to market the drug in Europe. However, I seriously doubt that the two companies have enough marketing muscle to compete against Zytiga and Xtandi. 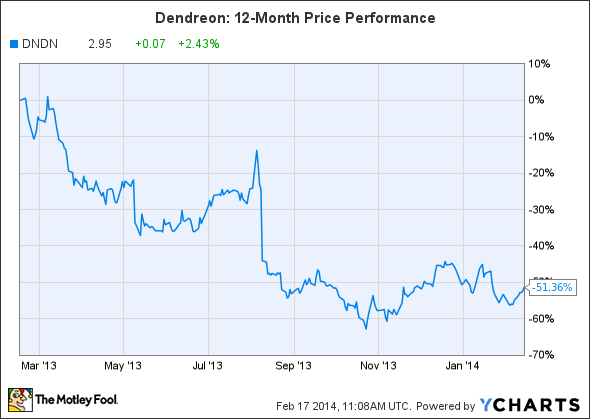 With only $166.7 million in cash and equivalents and $597.6 million in debt, Dendreon is in a precarious situation. Its only source of revenue is drying up fast, and it has no other late-stage pipeline candidates.

Prosensa: GSK doesn't believe in it -- so why should you?
Throughout 2013, Prosensa and its former partner GlaxoSmithKline competed against Sarepta Therapeutics (SRPT 2.66%) to launch the first dedicated treatment for Duchenne muscular dystrophy (DMD).

DMD is a rare and fatal genetic disease which affects one in every 3,500 boys born worldwide. The disease causes progressive muscle weakness, usually confining patients to a wheelchair by age 12 and causing death by age 16.

Prosensa's drisapersen and Sarepta's eteplirsen both use RNA exon-skipping technology to boost the production of dystrophin, a protein necessary for muscle growth which DMD patients lack. The clinical trials for both are mainly measured in two main ways -- the production of dystrophin and a six-minute walk test, which gauges how far a patient can walk within six minutes.

Prosensa's problem is that drisapersen has consistently trailed eteplirsen in efficacy. A phase 2 study conducted by GSK showed that drisapersen patients could walk an average of 117 feet more than patients given a placebo. Unfortunately, that didn't measure up to the improvement of 152 feet Sarepta reported in its eteplirsen patients. However, investors should note that GSK's group consisted of 53 boys compared to only 12 in Sarepta's group.

GSK and Prosensa then moved on to a phase 3 study with 186 boys, but that trial failed to meet its primary endpoints or even demonstrate an improvement over the placebo last September. As a result, the stock plunged from $24.00 to $7.14 in a single day. Sarepta didn't fare much better -- its stock lost more than half its value on November 12, after the FDA told the company that it should not seek accelerated approval for eteplirsen on its positive phase 2 results alone. 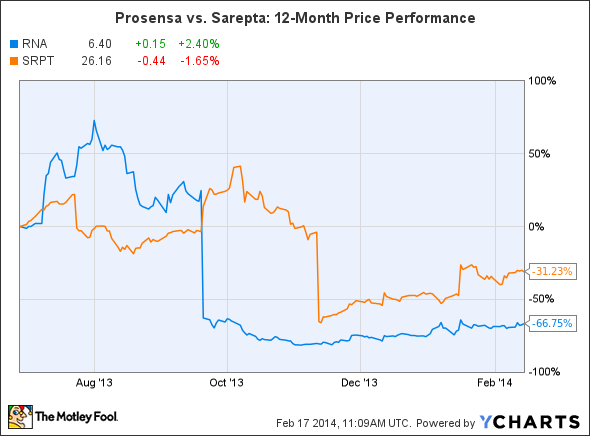 GSK eventually handed drisapersen back to Prosensa in January 2014, ending the four year collaboration between the companies. That left Prosensa dead in the water, with only $112.3 million in cash at the end of last quarter, and a negative operating cash flow of $28.4 million.

Last month, Prosensa reported some additional data at the JPMorgan Healthcare Conference which suggested that earlier treatment of DMD with drisapersen could slow the progression of the disease. However, investors should take that development with a grain of salt, considering that Sarepta also released 120-week results at the conference which showed improvements in the six-minute walk test among its original 12 patients.

The Foolish takeaway
In conclusion, biotech investors shouldn't confuse an underdog with a dog. These three busted biotech stocks -- Amarin, Dendreon, and Prosensa -- don't have any real positive catalysts on the horizon and won't recover anytime soon. Yet shrewd investors should notice that their failures highlight better, more conservative picks in each category -- GSK for fish oil treatments, J&J or Medivation for metastatic pancreatic cancer drugs, and Sarepta for potential DMD treatments.

Why Investors Were Giving Amarin the Cold Shoulder Today
376%