Will the strong performance of UnitedHealth versus Johnson & Johnson in 2013 be reversed in 2014? 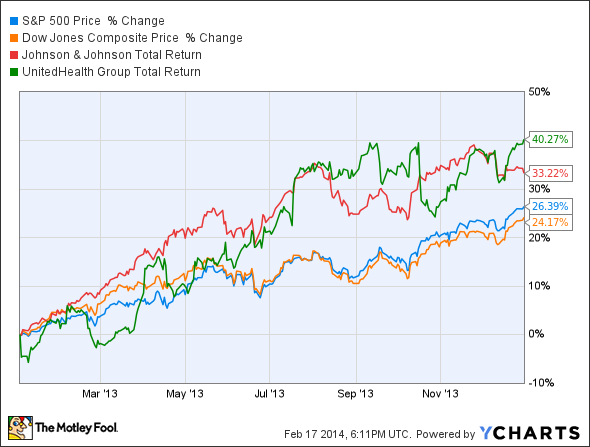 Strong results
Focusing on the fourth-quarter results released by both companies since the start of the year, it's tough to see why health care juggernaut Johnson & Johnson's share price rise is ahead of insurer UnitedHealth.  UnitedHealth posted strong earnings results that showed top-line growth of 11% and earnings per share growth of 18% when compared to the same quarter of 2012. Johnson & Johnson's results were encouraging but notably weaker -- revenue was up by 4.5% and EPS increased by 4.2%. Of course, the dip in UnitedHealth so far this year could be a result of profit-taking following last year's strong results.

Forecasts
However, the growth rate seen in UnitedHealth's fourth quarter is not expected to last, with sales and earnings growth forecast to be in the single-digits, as opposed to double-digits, in 2014 and 2015. UnitedHealth is forecast to deliver 8% annualized total sales growth over the next two years, with EPS set to increase by 5% per annum during the same time period. Part of the reason for this slight fall in growth rate could be the exceptional margin expansion in the second half of 2013, which is unlikely to continue at the same pace in the future. The growth rate forecasts are, nevertheless, generally in line with those of the wider market.

Meanwhile, Johnson & Johnson is forecast to grow at a similar rate over the next two years as it did in 2013. Revenue is expected to increase at an annualized growth rate of 4.3%, while EPS growth is projected at 6.5%. While revenue and earnings growth look steady, 40% of Johnson & Johnson's business remains in pharmaceuticals, so shares could remain volatile as updates to the drug pipeline are announced. Generic competition and divestment of divisions (part of the company's restructuring) may also lead to more volatile numbers than are presently in the market.

Although not a perfect fit in terms of comparison (since UnitedHealth is extremely diversified), pharmaceutical stocks such as Pfizer (PFE -2.01%) and Bristol-Myers Squibb (BMY -0.97%) offer yields that are roughly in line with that provided by Johnson & Johnson. Pfizer yields 2.7% and Bristol-Myers Squibb yields 2.6%, with dividends per share forecast to grow by 24% and 5.2%, respectively, over the next two years. These figures suggest that UnitedHealth may be a touch expensive, since its yield is significantly below both the market and a small basket of other health care stocks (Bristol-Myers Squibb and Pfizer), although admittedly none are a perfect comparator.

The potential winner
It seems as though Johnson & Johnson has a relatively strong chance to continue its outperformance of UnitedHealth through 2014. Of course, that's not to say that UnitedHealth isn't a great company with strong prospects -- it certainly is. However, with comparable growth rates, a higher yield, the potential for positive developments in its pipeline, and almost twice the rate of dividend per share growth over the next two years, Johnson & Johnson has a good chance of beating UnitedHealth this year.