Please ensure Javascript is enabled for purposes of website accessibility
Log In Help Join The Motley Fool
Free Article Join Over 1 Million Premium Members And Get More In-Depth Stock Guidance and Research
By Aimee Duffy – Feb 17, 2014 at 11:30AM

Investors love master limited partnerships because of the compounding power of their massive quarterly distributions. The three MLPs we’re looking at today have been growing theirs every quarter for more than five years straight.

It was just this past October when Eagle Rock Energy Partners announced it would cut its distribution more than 30%. Barely two months into 2014, investors have watched another master limited partnership (MLP) fall victim to the same fate, as Boardwalk Pipeline Partners cut its payout an astounding 80%.

First and foremost, investors want to see consistency. All three of the MLPs on today's list have increased their distributions every quarter for at least the last five years. In EV Energy Partners' case, it has been seven straight years of consecutive increases. 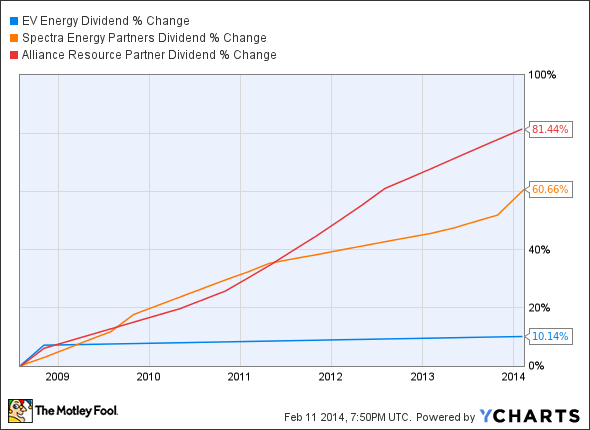 Still, Spectra Energy Partners and Alliance Resource Partners look pretty good here. But consistently increasing distributions is only well and good if the MLP is also generating enough cash to actually cover them. If it isn't, the future may hold a Boardwalk Pipeline-type surprise.

Surprisingly, Alliance Resource Partners -- the coal MLP! -- looks the best here. The partnership reported record results for coal sales, net income, and EBITDA in 2013, and was able to grow its distribution more than 8% for the fourth quarter.

EV Energy Partners again fails to impress. Though the partnership has yet to post its fourth-quarter earnings, which will impact its ratio here, it did not approach full coverage in any of the first three quarters of 2013.

Spectra Energy barely fails here. The partnership posted full coverage in the first quarter of 2013 before dropping off in the second and slowly rebounding in the third and fourth. The partnership is planning for distribution growth between 8% and 9% through 2016, and investors should expect to see coverage back up over 1.0 times payouts if that is the case.

Bottom line
Master limited partnerships can be complicated investments, and these two figures are not the only ones that matter. That said, they will give you some sense of how strong an MLP is from a mile up. As always, if you do plan to invest in one of these vehicles, make sure due diligence is part of your process.

Aimee Duffy has no position in any stocks mentioned. The Motley Fool recommends Alliance Resource Partners, L.P. We Fools may not all hold the same opinions, but we all believe that considering a diverse range of insights makes us better investors. The Motley Fool has a disclosure policy.