Netflix, Chipotle, Facebook, Under Armour, and Michael Kors delivered blowout earnings reports for the last quarter. Even better, they are positioned for growth over years to come. Here's what investors should know about them. 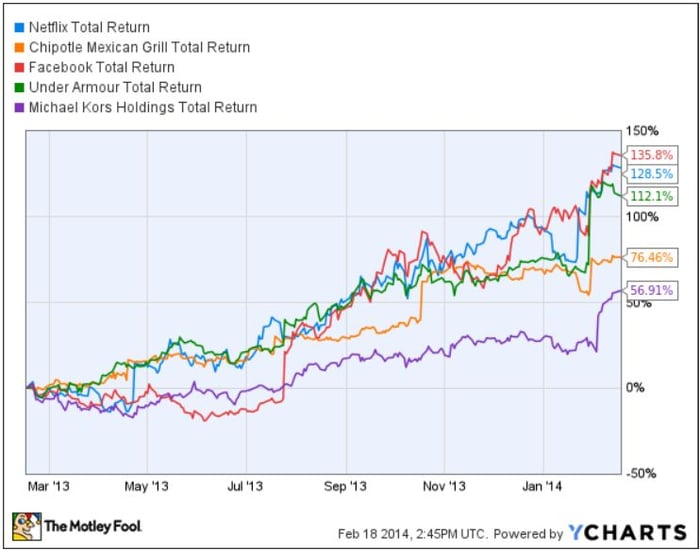 Earnings season is not "officially" over yet, but it's not too soon to find some clear winners from the latest round of financial reporting. Netflix (NFLX 2.96%), Chipotle (CMG 1.31%), Facebook (META 1.88%), Under Armour (UAA 3.64%), and Michael Kors (CPRI 2.80%) delivered truly outstanding performance during the last quarter, and this has important implications for these companies going forward.

Netflix: The good guys win in the end
Netflix tends to be a very volatile stock, and both bulls and bears usually have extreme opinions regarding the future of company. But the bulls have clearly been winning over the last few quarters as Netflix continues growing its subscriber base at remarkable speed and improving its profitability levels.

Revenues for the fourth quarter of 2013 came in at $1.18 billion, a 24% increase versus a year earlier as the company added 2.33 million net U.S. streaming subscribers and 1.74 million international streaming members during the period. Profitability was also on the rise, since Netflix is increasing its membership revenues at a faster rate than content costs, and management estimates that it will reach the company's goal of a 30% contribution margin by 2015.

A growing subscriber base and higher profit margins as a percentage of sales could generate spectacular growth rates for investors in Netflix over years to come.

Chipotle is still as spicy as ever
Chipotle Mexican Grill has been one of the most explosive growth stories in the restaurant business over the last years, and the business continues firing on all cylinders according to the company's latest earnings report.

Revenue for the fourth quarter of 2013 increased by 20.7% on the back of a remarkable jump of 9.3% in comparable restaurant sales during the period. Restaurant-level operating margin increased by 100 basis points to 25.6%, and diluted earnings per share grew by 29.7% versus the same quarter in the prior year.

Customers can't seem to get enough of this burrito company, so there is no market saturation in sight for Chipotle at this stage.

Mobile daily active users increased by 49% to $556 million on average for December 2013, and mobile monthly active users grew by 39% to 945 million. This friend request from Facebook is becoming increasingly convincing as the company expands and grows into mobile.

Under Armour is made to compete
Under Armour has recently been affected by negative publicity due to criticism regarding the speed-skating suits it made for the U.S. team competing in the Sochi Olympics. This could generate some volatility in the stock price in the short term, but it's hardly a reason to panic when it comes to evaluating Under Armour and its long-term growth prospects.

The company delivered a remarkable sales increase of 35% during the fourth quarter of 2013. This was Under Armour's 15th consecutive quarter of sales growth above 20%, and earnings per share jumped by 27% during the period.

Under Armour could increase sales by roughly 10 times before reaching the same sales level as Nike, so the company still has plenty of room for expansion in the coming years.

Michael Kors is in fashion
Michael Kors is clearly positioned on the right side of the trend in the fashion business: Demand for this high-end brand is as hot as it gets, and pricing power generates astronomic profit margins for investors.

The company delivered an amazing sales increase of 59% in the fourth quarter of 2013 on the back of 98 new stores and a remarkable growth rate of 27.8% in comparable-store sales. Gross profit margin was 61.2% of sales versus 60.2% in the year-ago quarter, and operating margin expanded to 33.9% of sales from 32.2%.

Growing sales and sky-high profitability sound like a powerful growth driver for investors in Michael Kors, and booming demand indicates that the company still has plenty of opportunities for growth, both in the U.S. and in international markets.

Bottom line
No investment decision should be based solely on information from a single quarter; however, quarterly figures can highlight important long-term trends. These five companies operate in different businesses and have their own strengths and weaknesses as investments, but they also have one thing in common: outstanding growth potential confirmed by recent earnings reports.

Andrés Cardenal owns shares of Michael Kors Holdings and Netflix. The Motley Fool recommends and owns shares of Chipotle Mexican Grill, Facebook, Michael Kors Holdings, Netflix, Nike, and Under Armour. Try any of our Foolish newsletter services free for 30 days. We Fools may not all hold the same opinions, but we all believe that considering a diverse range of insights makes us better investors. The Motley Fool has a disclosure policy.