Apple's (NASDAQ:AAPL) MacBook Air is due for an upgrade during 2014, particularly as the Windows notebook/Ultrabook ecosystem has aggressively pursued high-resolution displays, slim displays, and even touchscreens. While Apple aggressively pursued improved battery life in the 2013 MacBook Air -- and arguably did a better job utilizing Intel's (NASDAQ:INTC) Haswell than any other PC vendor -- the next-generation MacBook Air is going to need a major new selling point. Just what could it be?

Bye-bye fans!
At the Intel Developer Forum, Intel talked about how its next-generation Broadwell processor would enable fanless Ultrabook/convertible designs: 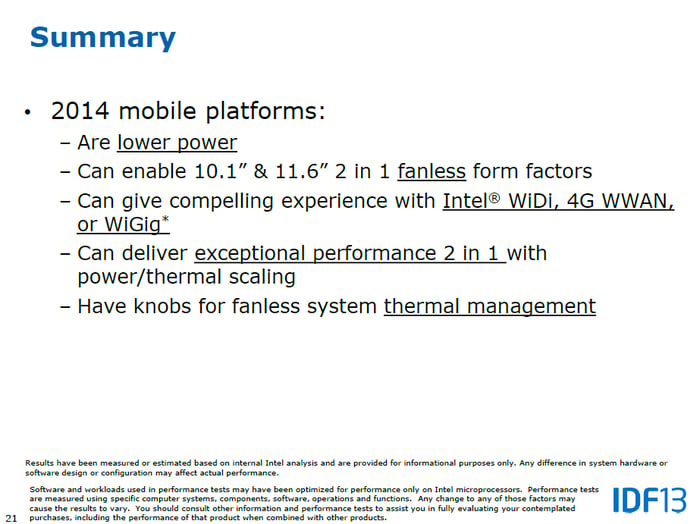 Apple is well-known for gorgeous industrial designs that maximize the user experience. Apple also likely heavily influences the design of Intel's chips. So, it seems only natural that a next-generation MacBook Air would take full advantage of the benefits of a chip suitable for fanless designs.

What about that iPad Pro?
What's interesting is that Apple is reportedly planning a larger iPad, commonly referred to as the "iPad Pro." This is supposed to be a convertible, productivity-oriented device built around Apple's next-generation A8 chip and iOS. This seems a lot like a MacBook Air replacement. However, since it doesn't run full OS X, there will still be users who want a full productivity-oriented product.

Further, a product built on a low-power Intel Core processor is likely to offer some pretty significant performance advantages over a next-generation Apple A8 system-on-chip, even in a fanless form factor. Indeed, today's Haswell-based MacBook Air offers well more than twice the CPU performance -- and multiple times the GPU performance -- of an Apple A7 running at full-tilt. It would be difficult for Apple to outright replace an Intel-powered device with a custom device without taking a potentially noticeable performance hit. The MacBook Air and iPad Pro will likely co-exist, with the former powered by Intel and the latter by Apple's own chip design.

The lines are blurring
The bottom line is that the lines between a large, high-end tablet and a traditional PC are blurring, and it's already clear that the MacBook Air and iPad Air lines are converging. While Apple's mobile chips are quite formidable, they are still fighting the MacOS software base, Intel's much greater experience at high-performance processor design, and a manufacturing disadvantage on the part of Apple's foundry partners. Apple will still likely continue to push forward its MacBook line, even if the iPad line begins to start acting more as a substitute for these products, rather than a complementary one.