Microsoft (MSFT 0.13%)/Lionhead Studios' Fable franchise, an open world sandbox RPG, is definitely an acquired taste for most gamers. The titles, designed by Peter Molyneux, feature awkward moments of burping and chicken dancing amid bloody beheadings and human sacrifice. It's as if Mr. Molyneux pureed Game of Thrones with Monty Python in a blender. In fact, John Cleese even has a starring role in the third title, Fable III.

Now, to celebrate the 10th anniversary of the original game, Microsoft has released an updated version of the first game, titled Fable Anniversary, for the Xbox 360. In addition, Lionhead Studios has unveiled new details regarding the next installment of the franchise, Fable Legends, which is expected to arrive for the Xbox One in the summer of 2015.

Therefore, let's take a look at the past, present, and future of the Fable franchise to see where the series is headed.

The Fable of grand promises and apologies
Molyneux, best known for other hit titles such as Dungeon Keeper, Populous, and Black & White, is also well known for some big exaggerations. Prior to the release of Fable in 2004, Molyneux claimed that the game would offer boundless freedom, the ability to get married and have children, and multiplayer modes.

Most of those features weren't offered at all in the final version, which was plenty of fun but hardly a revolutionary leap forward in action RPGs. It also didn't help that ZeniMax/Bethesda's Elder Scrolls III: Morrowind, a game that offered the boundless freedom that Molyneux had promised, was released two years earlier. Molyneux issued a formal apology for Fable's missing features in October 2004.

However, Molyneux's alternating grand promises and apologies continued throughout Fable II, which he later dismissed as "rubbish", and Fable III, which he later felt "ashamed" of. That's definitely odd behavior that hints at development problems at Lionhead Studios. Nonetheless, sales of the Fable titles have increased with every new title.

Despite Molyneux's own opinions, gamers generally regard Fable II as the high point of the series, as it restored many of the features originally intended for the first title. Fable III, however, was crushed by two huge problems -- overly simplistic game design and glaring tonal shifts that nearly ruined the game.

The Fable of mixing big dreams with bad storytelling
In my opinion, Fable III was the worst game in the series, because it minimized the positive qualities of the first two games, amplified the worst aspects, and added a jarring third act that felt like a different game entirely.

For the most part, Fable III resembled its predecessors -- it was an open sandbox world, you could marry and have children, buy houses, and customize your character to your liking with clothes, accessories, and tattoos. Unfortunately, its jarring Monty Python meets Game of Thrones formula turned the story into a farce that neither worked as a comedy nor a drama. Meanwhile, the player becomes the king or queen in the third act, and is required to make moral choices to save the kingdom.

Yet these "moral choices" are cartoonishly obvious -- for example, the player is asked at one point to either turn an orphanage into a brothel or a homeless shelter. "Evil" choices get more money, and thus boost the country's defenses against an "ultimate evil," while "good" choices earn less money but more respect. It was simply a tedious and unnecessary exercise of raising money to win the game in the end.

These silly choices paled in comparison to the moral dilemmas seen in Electronic Arts (EA 0.50%)/Bioware's RPGs, such as Star Wars: Knights of the Old Republic, Jade Empire, Mass Effect, and Dragon Age.

In other words, Fable III either made gamers forget why they even enjoyed the franchise in the first place, or made them nostalgic for the first two games.

Why Fable fans should be worried
Whereas Fable III minimized a lot of the better aspects of the first two games, Fable Legends could be a headfirst dive off a cliff for Lionhead Studios. 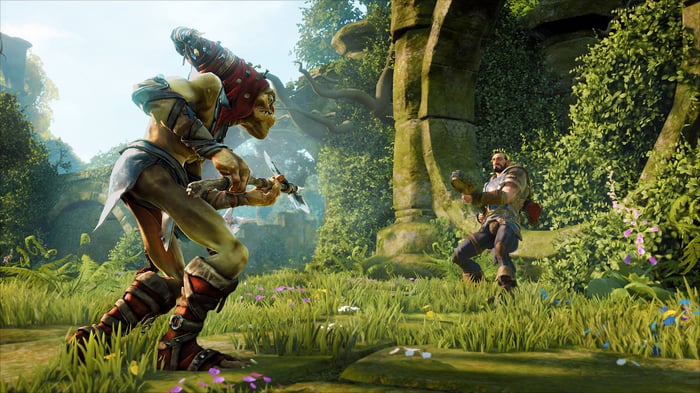 There are already two big problems with Fable Legends.

First, the game is reportedly a dungeon crawler, similar to Activision Blizzard's (NASDAQ: ATVI) Diablo, departing from its traditional action RPG format. This means that there will be a lot less interaction with townspeople or character morphing due to a good or evil alignment.

Moreover, the game is designed to be a multiplayer experience -- four players assume the role of heroes, while a fifth plays a dungeon-controlling villain who attempts to thwart the heroes' progress by releasing monsters and triggering traps. If five players aren't playing simultaneously, the AI fills in. While the concept is creative, it sounds a lot more like a cross between Diablo and Mario Party instead of Fable.

Second, Lionhead recently confirmed that Fable Legends would run on a "games as a service" model. In other words, gamers should expect to pay for plenty of microtransactions and DLCs. Although Lionhead hasn't confirmed the exact nature of the "services," it's easy to see the studio nickel-and-diming gamers for new tattoos, weapons, armor, or items.

Call me a pessimist, but that certainly doesn't sound like the original Fable I played and loved 10 years ago.

In fact, even the new graphically updated version of the original title, Fable Anniversary for the Xbox 360, has gotten inferior reviews (68% on Metacritic) compared to the original game's 83% rating, with many reviewers noticing glitches that weren't present in the original.

The bottom line
In closing, if you haven't played any of the Fable games yet, I strongly suggest picking up a $10 digital copy of Fable: The Lost Chapters for the PC. The game has aged remarkably well, and remains one of the best action RPGs of the past decade. If you enjoy it, you should also consider picking up a copy of Fable II for the Xbox 360.

However, you should probably stop there if you don't want your memories to be ruined, since that's where the franchise clearly peaked. By all accounts, Fable Legends will continue the franchise's embarrassing downward spiral that started with Fable III -- only this time, it will probably cost you additional in-game microtransactions.