Learn who are the real winners and losers from the cable industry's biggest deal ever.

One of the biggest news stories last week was the decision by Comcast (CMCSA 0.34%), the largest cable operator in the U.S., to acquire competitor Time Warner Cable (NYSE: TWC) for more than $45 billion in a stock-for-stock transaction.

The transaction is set to create a mammoth cable company, as the combined networks of Comcast and Time Warner would surpass 84 million households, or roughly 70% of the U.S. population. The boards of directors of both companies have already approved the transaction, but the deal still needs to win approval from antitrust regulators. If things go north for Comcast, the merger would give birth to a cable giant with massive pricing and power in negotiations with networks over licensing fees. How will this deal change the cable industry? More importantly, who are the potential winners and losers? 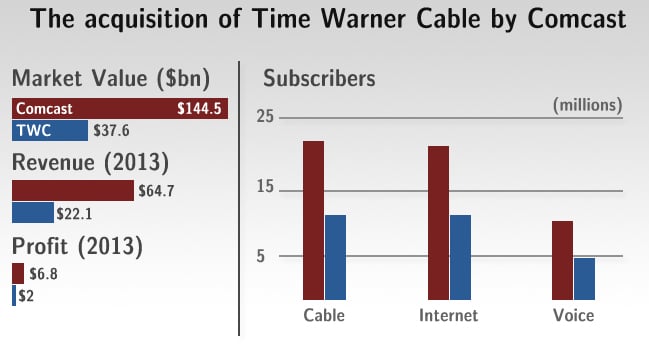 The merger
After the deal, Comcast would end up with roughly 30 million video subscribers, a net gain of 8 million. The cable company will also gain major markets in Los Angeles, New York, and Texas. It will add several new channels to its network, including Time Warner Cable's SportsNet. Note that Comcast will also own all of Time Warner Cable's technology. As a result, Comcast estimates that the transaction will generate $1.5 billion in operating efficiencies and economies of scale.

The winners
Time Warner shareholders have plenty of reasons to be glad. First, the merger will be tax-free for them, according to Comcast. Second, Time Warner shares are up roughly 8% since the deal was announced. This is because Comcast is willing to pay a premium higher than the offer Time Warner initially refused from Charter Communications (CHTR -0.03%) last month, in which Charter sought to acquire the company for $37.3 billion. Capital gains will likely help John Paulson, a hedge fund manager specializing in merger arbitrage, who is long six million shares of Time Warner.

According to John Patrick Pullen from Fortune, advertisers could also see some benefits from this deal because the new Comcast will be able to provide them with a much farther reach.

The losers
Attracted by the benefits of economies of scale, John Malone -- Chairman of Liberty Media, Liberty Global, and Liberty Interactive -- wanted to consolidate the cable industry by acquiring Time Warner. Malone, who bought a 27% in Charter Communications in early 2013, was pushing for a deal between Charter and Time Warner. However, by bidding too low, Malone lost a big deal, and got scooped by its main rival.

The good news for Malone is that Comcast has announced it will unload three million subscribers before the deal closes. This could be a great opportunity for Malone to acquire new customers, almost for free.

Note that the new mammoth cable company will have more negotiation power against content providers and over-the-top video providers. From independent channels to large media conglomerates, content providers will not be able to have a real national reach without a deal with the new Comcast.

On the Internet service providing front, the new Comcast may try to get more money from companies that specialize in providing video streaming via the Internet (such as Netflix, Hulu, and Amazon Prime) as these companies consume more bandwidth than other services. However, net neutrality rules would still protect on-demand streaming companies, at least until Jan. 2018.

Final Foolish takeaway
The acquisition of Time Warner by Comcast is set to change the cable industry dramatically. Covering 84 million homes, or roughly 70% of the U.S. population, the new company will have more negotiation power against content providers and online video streaming services. Overall, the deal seems to come at a good time for Comcast, which recently ended a six-year streak of TV subscriber losses. However, it's too early to determine if lower content acquisition costs will translate into lower subscription fees for consumers.