The legendary glazed-doughnut chain has become an investor darling again, but will Krispy Kreme's growth continue this time?

Investors love stocks that consistently beat the Street without getting ahead of their fundamentals and risking a meltdown. The best stocks offer sustainable market-beating gains, with robust and improving financial metrics that support strong price growth. Does Krispy Kreme Doughnuts (KKD) fit the bill? Let's take a look at what its recent results tell us about its potential for future gains.

What we're looking for
The graphs you're about to see tell Krispy Kreme's story, and we'll be grading the quality of that story in several ways:

What the numbers tell you
Now, let's take a look at Krispy Kreme's key statistics: 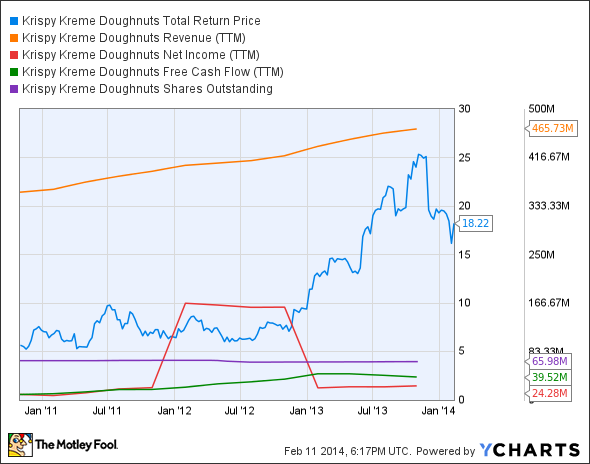 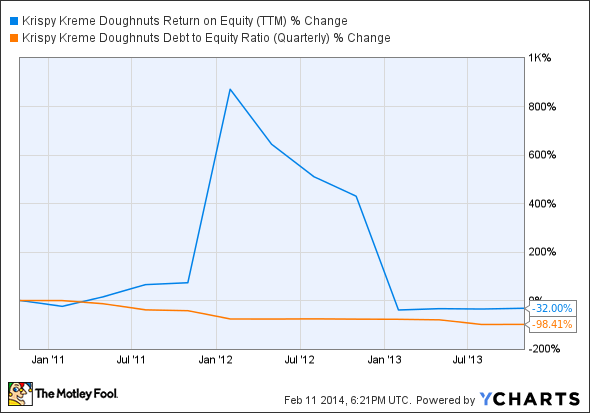 How we got here and where we're going
Krispy Kreme had a solid start, but it tripped on a few important metrics. The company fell short on revenue growth by a narrow margin, and its share price growth has outpaced the gains in earnings per share. That's not enough to call this stock stale, as Krispy Kreme still earned four out of seven possible passing grades, and based on its narrow misses on two other metrics, it certainly seems to have a good chance at a perfect score next time around. How might Krispy Kreme push its revenue growth further over the next few quarters? Let's dig a little deeper.

Krispy Kreme recently posted better-than-expected revenue and earnings for its fiscal third quarter thanks to better cost controls and a 3.7% uptick in same-store sales -- the marketing efforts for its premium-priced beverage offerings appear to be paying off. The company also raised its full-year earnings guidance for fiscal 2014, expecting between 28% and 34% year-over-year growth on the bottom line, but shares nevertheless lost roughly a quarter of their value since these optimistic numbers weren't optimistic enough for Wall Street. Fool contributor Dan Moskowitz notes that Krispy Kreme already trades at more than 50 times earnings, which looks pricey when compared to larger peers Dunkin' Brands (DNKN), Starbucks (SBUX -1.43%), and McDonald's (and this doesn't count Starbucks' recent legal settlement and the resulting short-term impact on its bottom line), as these stocks trade at valuations around 37, 30, and 17, respectively However, Krispy Kreme has still outperformed its peers since Dunkin's IPO, its recent crash notwithstanding: 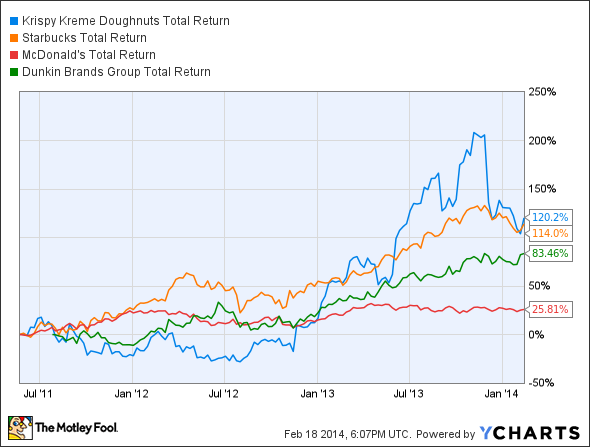 Fool contributor Brian Hill notes that Krispy Kreme has lofty plans to expand to around 900 international locations by 2017, and the company also hopes to grow its U.S. store count from 249 to 400. Krispy Kreme has already begun to expand with a small Hot Shop format in the U.S., which requires relatively small capital investment by franchisees. The company has also signed a multiyear development agreement to open 23 stores in the southeastern Chinese province of Guangdong, which could put it in the sweet spot of China's rapid urbanization and resultant higher consumer spending. Krispy Kreme has also been aggressively beefing up its support infrastructure and its relationships in India. Rival Dunkin' Brands has ambitious plans of its own and continues to expand in both domestic and overseas markets. Dunkin' added over 370 stores to its tally over the last year, and it hopes to open between 380 and 410 new stores in 2014. Dunkin' even has its own franchise agreement to expand in eastern China, which is bound to provoke competition between the two doughnuts-and-coffee chains.

Fool contributor Robert Hanley notes that Krispy Kreme and Dunkin' could face cutthroat competition from Starbucks, which has already built a humongous network of about 4,000 stores in the Asia-Pacific region. Moreover, Starbuck's acquisition of San Francisco-based La Boulange bakeries is likely to give it an opportunity to roll out an overhauled lineup of baked goods at more than 3,500 company-operated cafes in the U.S.

Putting the pieces together
Today, Krispy Kreme has some of the qualities that make up a great stock, but no stock is truly perfect. Digging deeper can help you uncover the answers you need to make a great buy -- or to stay away from a stock that's going nowhere.

Alex Planes has no position in any stocks mentioned. The Motley Fool recommends and owns shares of McDonald's and Starbucks. We Fools may not all hold the same opinions, but we all believe that considering a diverse range of insights makes us better investors. The Motley Fool has a disclosure policy.

Krispy Kreme Stock Is Back. How Tasty Does It Look?