Shares of interconnect vendor Mellanox seem poised to pop ahead of a cyclical upturn in high-performance computing.

Following a particularly bullish report from HPC system vendor, Cray (CRAY) shares of Mellanox (MLNX), which have been in decline following its earnings report a few weeks ago, finally received a much-needed lift during the Feb. 14 session. While the Street was initially disappointed in the company's results and first-quarter guidance, it seems that investors are willing to give the company a pass following Cray's report. So, what are investors now focused on, if not mildly disappointing results?

The Intel "Grantley" cycle is coming
The single most important part of the Mellanox story for 2014 is what, exactly, the ramp of the "Grantley" platform from Intel (INTC -1.11%) will look like, particularly in high-performance computing. Indeed, pent-up demand, thanks to a quarter-long slip from Intel on its Sandy Bridge-EP platform, is largely what drove the oversized results and surprises during 2012 that drove Mellanox to bubbly highs.

While the refresh of the "Romley" platform with Ivy Bridge-EP is likely to help, somewhat, with HPC adoption, the real "fun" (and what will drive a real upgrade cycle) doesn't start until the Grantley platform hits. Grantley is important for HPC for a couple of reasons:

All in all, Grantley is as substantial an improvement, if not moreso, over Romley, which suggests that the upgrade cycle (coupled with the secular growth of HPC in general) could be quite powerful come the second half of the year (which directly impacts Mellanox). In particular, according to a leaked road map from VR-Zone, the Grantley launch should be in Q3, which suggests that we'll begin to see just how well it works out by the end of Q2: 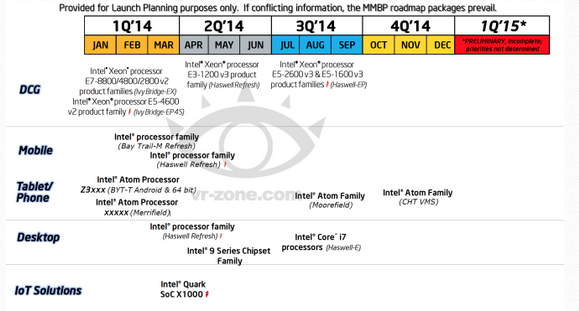 Direction and magnitude drive this stock
Mellanox's management explicitly claimed that the company would see sequential growth for each quarter of 2014, and sell-side estimates sit at about 18.8% year-over-year growth for the current year. If the company is able to achieve these numbers during the year, then there is very little reason why shares couldn't find a home in the mid-$40's to low $50's over the next quarter or two. The key really will be news-flow and the answers to the following two simple questions:

The thing with Mellanox is that, given the unpredictability of the magnitude of these major upgrade cycles, the only thing that we can be sure of is that we'll get those sequential growth quarters. Unfortunately, at today's price, there's already a lot of pessimism baked in. Indeed, Cray's monster 36% run in the Feb. 14 session wasn't caused by some unheard-of beat -- it was a modest beat on the top and bottom lines and a slightly better-than-expected guide. Something similar could happen with highly shorted Mellanox if it were to just beat estimates, even slightly, each quarter.

Conclusion
Mellanox is a product cycle play, pure and simple. Product cycles, particularly in tech, are often highly volatile, making investor and analyst estimates little more than guesses based on a vague direction. If you believe that the HPC market will continue to experience positive growth, and if you believe that the next-generation platform from Intel will drive pretty nice growth during the second half of 2014, then Mellanox is probably a good way to play it.