To combat the public backlash against diet sodas that beverage makers have loaded with artificial sweeteners, Coca-Cola (KO 0.88%) and PepsiCo (PEP -0.11%) have begun testing new products using stevia, the natural plant-based sweetener that's seen as the antidote for falling sales.

Coke is testing its new Life brand in Argentina, while Pepsi swapped out its aspartame in its Next brand in Australia. Just last week, DrPepper Snapple Group (DPS) joined the conga line of companies using stevia, hoping the natural sweetener plugs the giant sucking sound that has been its Core 4 TEN brands that rely on aspartame, high-fructose corn syrup, and acesulfame potassium.

According to a Euromonitor International report issued last month, the biggest trend may be in the greater reduction of sugar than previously thought possible -- as much as 50% less, in fact. One of the problems with stevia, however, has been the metallic aftertaste often associated with its use, but the Euromonitor report says the newest formulations have a much better taste profile.

Considering stevia is from a natural source, it's somewhat surprising it would have a chemical taste to it, and having tasted an actual stevia leaf from a crop a friend grew, I can attest that while incredibly sweet -- you immediately think of sugar upon chewing the leaf -- there was no such aftertaste present. The reason for the commercial product's poor showing, then, is the processing it undergoes to create the stevia extract used in various formulations.

Go to your local supermarket and pick up a box of Truvia, arguably the best known stevia brand made by agrigiant Cargill in partnership with Coke, and the first ingredient on the packaging -- and regulations require they be listed in order of dominance -- is something called erythritol, followed by stevia leaf extract, and natural flavors.

Although erythritol, a sugar alcohol -- or polyol, as it's called -- can naturally occur in fruit and fermented foods, manufacturers don't bother going that route but rather make it instead from carbohydrates such as sucrose, glucose, and starch. Cargill starts the process with GMO corn and chemically converts it into a food-grade starch called dextrose that is fermented with yeast and processed further until erythritol is created. 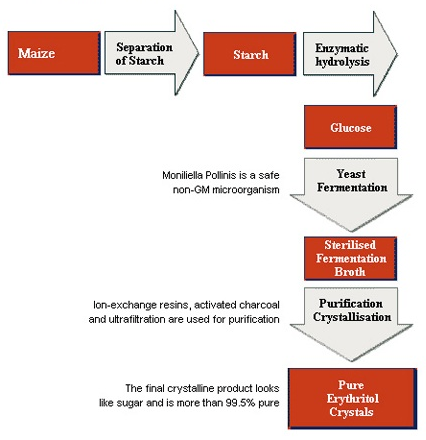 It settled a lawsuit last year over claims its stevia was so processed it couldn't be considered natural, and while Cargill will set up a $5 million fund to pay consumers who were deceived by its marketing of Truvia as "natural," it was able to maintain that its advertising was not deceptive while also being able to word its frequently asked questions section to "Erythritol is not genetically modified, and does not contain any genetically modified proteins." In essence, because the erythritol comes from the yeast and not the corn or dextrose, it does not contain GMOs, even though the GMO corn was where it started.

Even the "Stevia in the Raw" brand has as its first ingredient dextrose, while others that gained the "certified organic" status by the USDA contain the highly processed fiber derivative organic agave inulin. Pepsi's Pure Via stevia sweetener, that it produces with Merisant -- perhaps best known for its aspartame product Equal -- lists dextrose as its first ingredient.

So stevia, as it's marketed today, is hardly natural in the sense most consumers would think, and incredibly, the FDA bans the use of the actual stevia leaf as a sweetener, but permits the chemically processed versions to go through. Of course, the FDA has taken a hands-off approach when it comes to claims of products being "natural," but admitted that "[f]rom a food science perspective, it is difficult to define a food product that is 'natural' because the food has probably been processed and is no longer the product of the earth."

The beverage makers are relying upon stevia for a reversal of fortunes with their diet soft drinks, promoting its natural properties when it's anything but. That's setting themselves up for another fail, just as occurred when they went wholesale into infusing their drinks with aspartame after concerns about obesity made real sugar a concern.

For companies like Pepsi and Coca-Cola that are more diversified, they'll be able to salvage the latest attempts, but DrPepper Snapple, which has a lot more riding on its success than the others, is in a more fragile position, but I don't think any of them will realize the sweet taste of success from the effort.

Rich Duprey has no position in any stocks mentioned. The Motley Fool recommends and owns shares of Coca-Cola and PepsiCo. We Fools don't all hold the same opinions, but we all believe that considering a diverse range of insights makes us better investors. The Motley Fool has a disclosure policy.

Why Etsy Stock Was Climbing Higher This Week
376%