Tesla is set to release a lot of important information in its fourth-quarter-earnings report. Be sure to keep open for these three things.

It's no secret that Tesla Motors (TSLA 0.08%) has been one of the hottest stories in the stock market over the last year, and the story is likely still in its early pages. That's what makes each and every quarterly report from the electric-car maker interesting. Tesla is set to announce its results and hold a webcast today at 5:30 p.m. EST. Here are three things I'll be looking for in the results.

Standard metrics
While many investors will be looking at the earnings, as concerns about profitability remain, I won't focus on that as much. I'll lump three standard metrics into one group instead. The obvious aspects that I'll be looking for are sales, production volume, and gross margin.

CEO Elon Musk has said that he believes the company will reach 800 deliveries of the Model S per week by late 2014, and any guidance or confirmation on production expansion will be key for investors. Furthermore, as production ramps up, and with the company historically under-promising and over-delivering, it will be interesting to see what guidance Musk gives for Model S deliveries in 2014. It's possible that Tesla could reach between 33,000 and 35,000 global Model S deliveries this year. 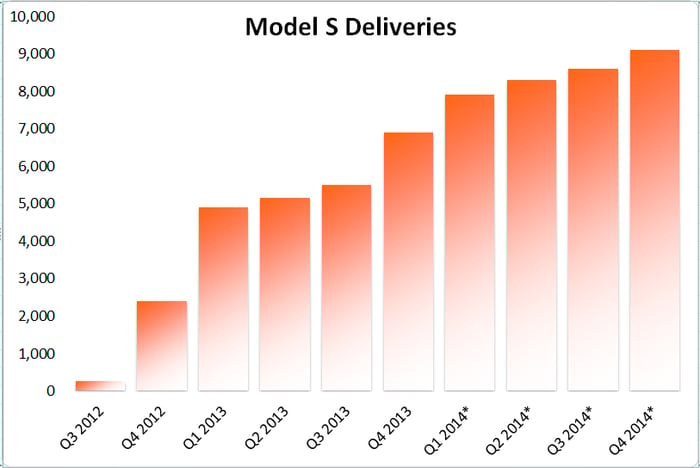 Source:Tesla press releases. * indicates quarterly estimate based on a scenario if Tesla hits 800 deliveries per week by late 2014.

Investors should zoom in on whether the company met one of its most important metrics -- its fourth-quarter goal of 25% non-generally accepted accounting principles gross margin, excluding zero-emission-vehicle credits. Last quarter, Musk was confident the company's forecast of 25% for the fourth quarter would be met; a shortfall would definitely be viewed as a negative.

But perhaps a more important factor is that the standard Tesla will be judged on is its own project developments.

Model X
I'll be particularly interested in plans or any details regarding Tesla's Model X crossover. It's anticipated to launch at the end of the year, with a higher volume of production planned for the second half of 2015. Expect more information during the webcast today.

More details on Tesla's Model X will also give some insight into the company's plans for its third-generation vehicle, the Model E. While the company already has orders for its Model X and is fairly certain of a launch by the end of this year, an unforeseen delay could push back the launch of its Model E vehicle. That could irritate customers already on the waiting list for the Model X, as well as investors hoping to see Tesla's growth story continue on schedule. Both of these vehicles will be huge factors in Tesla's near-term future, and of huge importance to current and potential investors.

Battery factory
Musk has confirmed that Tesla plans to build a battery factory, and that the automaker is deciding where it will be located and which partners would be included. I think this is a major driver for the stock price and Tesla's story going forward. While investors aren't sure what details or guidance to expect about the topic, it is hopeful that they will get a narrowed list of possible states for the battery factory's location, as well as which partners Tesla is teaming with. If the state is already selected, or if investors are given a rough timeline, it will be a very hyped announcement, as the third-generation, mass-market vehicle's success hinges on battery availability.

Takeaway
Young companies like Tesla, with high growth and volatile stock price swings, aren't for the faint of heart. It's possible that Tesla will impress Wall Street with its earnings, gross margin, production, and potential during this quarter's webcast, and then the stock price could decline as investors move to take some profit. In reality, while the stock price remains very high, this quarterly report could give us many important details to the next few pages of Tesla's story -- investors would be wise to listen up after the market closes today, and take any price swing with a dose of skepticism.