Please ensure Javascript is enabled for purposes of website accessibility
Log In Help Join The Motley Fool
Free Article Join Over 1 Million Premium Members And Get More In-Depth Stock Guidance and Research
By Andrés Cardenal - Feb 19, 2014 at 8:40AM

Coca-Cola, Procter & Gamble, ExxonMobil, Colgate-Palmolive, and General Mills have paid dividends for more than 100 years. Even better, they have what it takes to sustain payments over years to come. 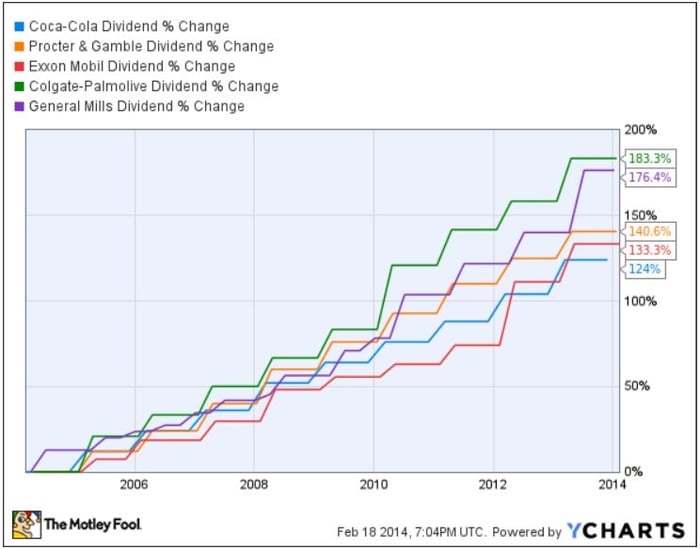 Cash doesn't lie: Dividend payments are a transparent sign of financial resiliency and fundamental strength. Coca-Cola (KO -0.65%), Procter & Gamble (PG 0.38%), ExxonMobil (XOM 0.56%), Colgate-Palmolive (CL 0.47%), and General Mills (GIS 0.25%) have paid uninterrupted dividends for more than 100 consecutive years. Even better, they have what it takes to continue paying growing distributions for years to come. Let's take a closer look at all five.

Sweet cash flows from Coca-Cola
Coca-Cola fell by more than 3.4% on Tuesday after the company's latest earnings report came in below expectations. Soda volumes in the U.S. are stagnant over the past several years because of market saturation and the trend toward healthier nutrition, and currency headwinds affected sales in emerging markets during the last quarter.

However, Coca-Cola is an undisputed market leader in the global soft-drinks market. The company owns 16 billion-dollar brands and an unparalleled global distribution network. Coca-Cola is adapting to changing consumer habits with an increased focus on healthy products, and emerging markets will provide plenty of room for volume growth over the coming years in spite of transitory currency factors.

Coca-Cola has paid dividends since 1893, and the company has increased distributions for the past 51 years. The dividend payout ratio is around 57% of earnings, and the stock is yielding 2.9% at current prices.

Clean up with Procter & Gamble
Procter & Gamble sells everyday necessities in more than 180 countries around the world. The company operates in a defensive industry and has a portfolio of 25 brands making more than a billion dollars in annual revenues. That means reliability and predictability for the company's cash flows through various economic scenarios.

Procter & Gamble has paid dividends since its incorporation in 1890, and the company has raised payments for the past 57 years. The payout ratio is around 64%, and the stock is yielding 3% in dividends.

Energetic dividend growth from ExxonMobil
Energy can be a cyclical and volatile business, but ExxonMobil is no average energy company by any means. With a market capitalization of more than $407 billion and globally integrated operations, the company stands out as an industry giant with abundant financial resources and unmatchable economies of scale. This is a big advantage for the company when it comes to competing for projects all over the planet, and it also means above-average profitability for investors.

Exxon has paid uninterrupted dividends since 1911, and the company has raised its payments for 31 years in a row. The stock is paying a dividend yield of 2.7%, and the payout ratio is comfortably low at around 33% of earnings.

Smiling dividends from Colgate-Palmolive
Colgate-Palmolive is a worldwide leader in oral care. The company owns a dominant market position in toothpaste and toothbrushes on a global scale, operates in more than 200 countries, and generates more than 75% of sales in international markets. In short, it enjoys geographic diversification and has plenty of growth opportunities in emerging markets.

The company has paid gleaming dividends for investors since 1895, and it has increased those payments over the past 50 years. The payout ratio is in the area of 54%, and Colgate-Palmolive pays a dividend yield of 2.2%.

General Mills for mouthwatering dividends
Thanks to the popularity of brands such as Cheerios, Betty Crocker, Pillsbury, Green Giant, Nature Valley, Old El Paso, and Haagen-Dazs, among others, General Mills holds the first or second share positions in various food categories around the world. The company has partnered with Nestle to distribute cereal products in more than 130 countries, so General Mills is smartly expanding its international distribution network to consolidate its competitive position.

General Mills has paid uninterrupted and unreduced dividends for 115 consecutive years. Dividends have increased over the past 10 years, and management has stated its intention to continue raising distributions in the coming years. The company pays a dividend yield of 3%, and the payout ratio is around 53% of earnings.

Bottom line
Coca-Cola, Procter & Gamble, ExxonMobil, Colgate-Palmolive, and General Mills are part of an exclusive group of companies that have sustained their dividend payments for more than 100 years. This feat speaks wonders about the fundamental strength of these companies and their ability to successfully go through all kind of economic scenarios while rewarding shareholders with consistent capital distributions.

Andrés Cardenal has no position in any stocks mentioned. The Motley Fool recommends Coca-Cola and Procter & Gamble and owns shares of Coca-Cola. Try any of our Foolish newsletter services free for 30 days. We Fools don't all hold the same opinions, but we all believe that considering a diverse range of insights makes us better investors. The Motley Fool has a disclosure policy.