Big Oil is scouring the world for the largest oil and gas development projects with the best economies of scale and the potential for impressive profit margins. This search has turned up some great projects, which have the potential to yield tens of billions of dollars in profit. But the problem is that these megaprojects are getting too big for even the world's largest integrated oil and gas players like ExxonMobil (XOM -0.85%), Chevron (CVX -0.80%), and Royal Dutch Shell (RDS.B).

Increasing concerns
These megaprojects and the way they have been handled is a hot topic for discussion within the oil industry at present. Chevron's Gorgon LNG project, a joint venture with ExxonMobil and Royal Dutch Shell has seen costs spiral from an initial estimate of $37 billion, projected back in September 2009, to a current figure of $52 billion -- an extra $15 billion is no small change, even for Chevron. The reason for this multi-billion dollar cost blowout? Rising labor costs, the strong Aussie dollar, and project delays are all to blame.

And it's not just Gorgon that is reporting ballooning costs; the world's largest, most complex, and most expensive oil project, the Kashagan oil field, operated by a consortium of companies including ExxonMobil, Royal Dutch Shell, and France's Total , has seen costs explode during the last decade. From an initial cost estimate of $57 billion for the life of the project, the Kashagan project is now expected to cost a staggering $136 billion over its lifetime -- that's 138% more than originally planned.

According to the last reported figures, the Kashagan field has cost $50 billion to get to where it is today, five times original estimates.

When commenting on the Kashagan project, one oil executive exclaimed: "Kashagan! I don't want to hear this word any more."

Rising across the board
And its not just these mega projects that are putting a strain on balance sheets. Specifically, Chevron's 2013 capital spending budget has overrun initial estimates by around 10%, with $33 billion originally budgeted. In part this overspend was due to exploration permit acquisitions, which were not included in the original budget.

Of course, with spending rising across the board oil majors are reporting rising levels of debt, despite their already robust cash flows. The chart below shows the net debt-to-equity levels of Chevron, Exxon, and Shell during the last four years and projections for the next two years. 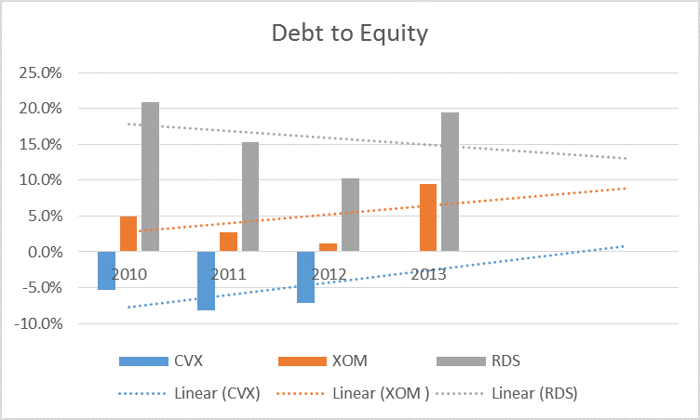 As we can see, apart from Shell debt is slated to rise across the board for all three companies, Shell is actually trying to reduce its borrowing by divesting assets, as I cover below.

However, it's not just rising debt that is of concern. Return on equity is also falling for oil majors, as they spend more money developing projects but realize a lower level of profitability from the projects when completed.

The chart below shows how return on equity has fallen at these three companies over the last four years.

Unsurprisingly oil executives are now coming under pressure due to rising capital spending, project delays, and having little to show of it. As a result, they have promised shareholders that capital spending has peaked and it's now the time for the sale of expensive assets.

Appeasing investor concerns
Shell is leading the charge here, recently announcing a review of its shale oil business in the United States, Nigerian assets, and cancelling plans to build a multi-billion dollar gas-to-liquids plant in Louisiana. The company plans to sell off a total of $15 billion worth of assets over the next two years, although this figure could double.

And it's not just Shell selling down assets. ExxonMobil sold its power operations in Hong Kong for $3.4 billion back in November. Meanwhile, according to a report by Bloomberg, Chevron is working with Jefferies Group to find buyers for at least four of the company's natural gas and crude oil pipeline operations within the United States, worth around $1 billion. Chevron also offloaded several billion dollars in oil-bearing assets within Nigeria last year.

Foolish takeaway
The rising costs of these megaprojects, along with increasing levels of debt and falling returns, are a major concern for the oil industry. However, investors should not be worried, as Big Oil's skilled management teams are working hard to cut costs in other regions, divesting non-essential assets to boost returns. Actually, this could be really beneficial for investors over the long term as international oil companies start to slim down and return more cash to investors, concentrating on only the most lucrative assets.

Rupert Hargreaves owns shares of Chevron. The Motley Fool recommends Chevron. We Fools may not all hold the same opinions, but we all believe that considering a diverse range of insights makes us better investors. The Motley Fool has a disclosure policy.