Despite its massive success, Apple relies heavily on the iPhone remaining dominant. If the company falters with the iPhone, it could face major problems quickly.

Apple (AAPL -0.34%) has enjoyed three major successes in recent years, first with the iPod then with the iPhone and iPad. But with the iPod nearing the end of its run and the iPad not producing anywhere near the profit that the iPhone does, Apple's long-term profitability today relies heavily on the company continuing to sell new iPhone models.

The iPhone, according to Apple's year-end report, accounts for 53.4% of the company's profit. That number has steadily climbed since 2007, and while Apple is not a one-product company, having more than half of your profit come from a single product makes a business especially vulnerable. 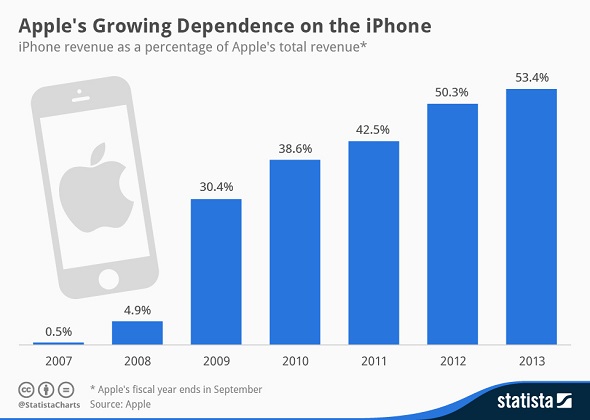 Only a few short years ago, BlackBerry (BB 2.36%) was the dominant player in the smartphone market -- a market it essentially created. President Obama used one, seemingly all business executives used them, and an increasing percentage of phone users were adopting the platform.

Then, the bottom fell out. BlackBerry, for reasons that have never entirely been explained, only made minor tweaks to its phones between 2009 and 2011 and did not release a new model until 2013. By the time that model came out, most of its customers had gone away.

Today, IDC reports that BlackBerry had just 1.9% market share to close 2013, down from 10.3% in 2011. Essentially, BlackBerry -- which does not have other product lines nor massive cash reserves to fall back on as Apple does -- went from solid player to nearly non-existance due to a few years of bad moves.

While those are impressive gains, Apple now has something it hasn't had for years -- an actual competitor. Fierce Wireless reported that according to NPD, Samsung's (NASDAQOTH: SSNLF) Android phones increased from 22% of smartphones owned in the year-ago period to 26% in the fourth quarter of 2013.

"They've [Samsung] done a phenomenal job sort of emerging from a pretty large set of handset makers to be the clear leader," venture capitalist Chris Dixon of Andreessen Horowitz told NPR in March 2013.

Having a competitor that gives customers a viable option should you falter can hasten the demise of a company or product line. BlackBerry didn't lose the majority of its user base in one product cycle, mostly because its devotees were intensely loyal and there was no comparable smartphone (with a built-in keyboard) to switch to. That worked, of course, until Apple convinced the public at large that an actual keyboard was not needed and BlackBerry users had an alternative to sticking with their old, not-updated phones.

Can Apple make an iPhone that bad?

While recent iPhones -- some would say iPhones since the death of Apple founder Steve Jobs -- have not wowed anyone, they have steadily (albeit boringly) moved the line forward. The iPhone 5S is not a radical improvement over the iPhone 5. Instead, it's a little better in a lot of ways -- enough ways that while iPhone 5 owners might not have felt compelled to upgrade if they weren't owed one by their phone carrier, owners of older iPhones did.

Apple, while it's less likely to innovate under current CEO Tim Cook, seems unlikely to release a radically different iPhone that would drive customers away. Even if the company did try something that was a radical departure (maybe an iPhone Mini or a phone with screens on both sides), it would likely release said product in tandem with a more conventional choice.

End of the smartphone era

At one point, the iPod was the dominant player in its category -- a category that largely does not exist anymore. At one point, carrying digital music with you required an iPod -- now phones, tablets, and in some cases cheap Flash drives have made the iPod all but irrelevant.

According to a chart produced by CNBC, iPod sales fell by nearly 49% from 2007 (when the iPhone was introduced) to 2013. The iPod didn't become any less cool during that period. It just became less necessary for most people to have a music-only device.

That type of fate seems like the most logical threat to the iPhone and its contribution to Apple's bottom line. What if the public moves away from phones to wearable devices like Google (NASDAQ: GOOG) Glass? As unlikely as this idea seems -- and no current product in a form the public has seen seems likely to supplant the smartphone -- it's not impossible that one will emerge.

Remember when netbooks were a rising category? All it took was the introduction of the iPad and netbooks barely exist. Of course, the smartphone killer -- if it ever happens -- may come from Apple in the same way the company made its own iPod irrelevant. But if it comes from Google, Samsung, or some genius working in his parent's garage, Apple is vulnerable.