Master investor Benjamin Graham and his disciples like to see a strong current ratio before buying shares. Nike excels on that metric.

Warren Buffett built his billions on the investing strategies of Benjamin Graham. One of Graham's core requirements for a great value investment is a position of super-liquid financials -- the current ratio should show assets covering long-term debts at least twice over.

This chart shows the three strongest ratios on the Dow today. Only 10 of the 30 Dow members today meet Graham's liquidity criterion, and most of them just barely clear the 2.0 bar. But not Nike: 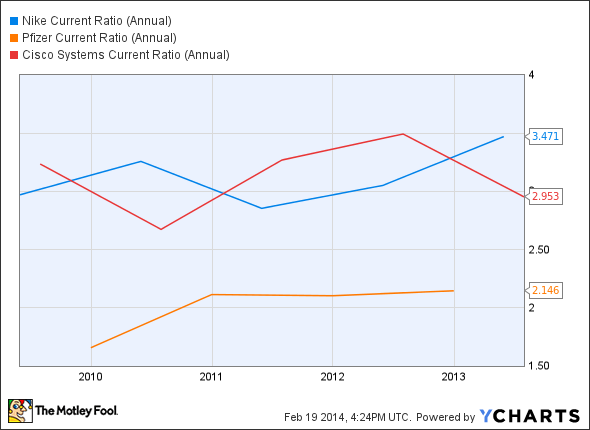 The athletic apparel colossus recently passed Pfizer (PFE -0.33%) at the pole position of this race. Pfizer's ratio is falling due to lingering debt effects from the $80 billion Wyeth buyout in 2009. The drug giant is not paying down its massive debt load any faster than it absolutely has to, while working capital balances fluctuate. Mind you, Pfizer's ratio is still strong. It's just not quite as impressive as Nike's anymore.

Cisco Systems (CSCO -0.54%) is actually on the rise in the long term. The networking hardware specialist stopped borrowing money for acquisitions a few years back, when CEO John Chambers promised to simplify his sprawling business.

The big simplification moves happened quickly, lifting Cisco's current ratio to the plateau where it rests today. Cisco sold a number of noncore businesses, and shut down a few others, reaping the rewards of direct payments and lower day-to-day expenses.

The ratio is not likely to move much higher at this point, because Cisco is embracing software operations with long-term license and support contracts in a big way. This moves money out of current assets (cash on hand) and into current liabilities (deferred revenue).

Cisco's current ratio still clears Graham's 2.0 bar, marking the company as a suitable target for deep-value investors. But again, neither Cisco nor Pfizer can measure up to Nike's massive current ratio.

Nike works on a smaller scale than Cisco or Pfizer. It would take monumental volumes of sneakers and yoga pants to match the big-ticket impact of cutting-edge drugs or million-dollar network routers. So Nike's $13.6 billion in total current assets may not look like much next to those masters of high-dollar volumes, but then Nike balances that against a much smaller liability total.

Nike generally takes money up front, and it doesn't even carry a line item for deferred revenue on its balance sheet. The portion on shoe shipments that hits store shelves before the store pays Nike turns up as a receivables asset instead, boosting that liquidity ratio even higher.

So Nike's liquidity magic rests on great supply chain management. It sets this company apart from the other 29 elite stocks on the Dow, and marks Nike as a top choice for value-conscious investors. With a current ratio of this caliber, Nike will be around for the long haul. It takes more than a temporary storm to sink this ironclad ship.