Las Vegas Sands, Melco Crown, Wynn Resorts, and MGM are reporting solid financial performance, and industry trends signal that these casinos may be a winning bet for investors. 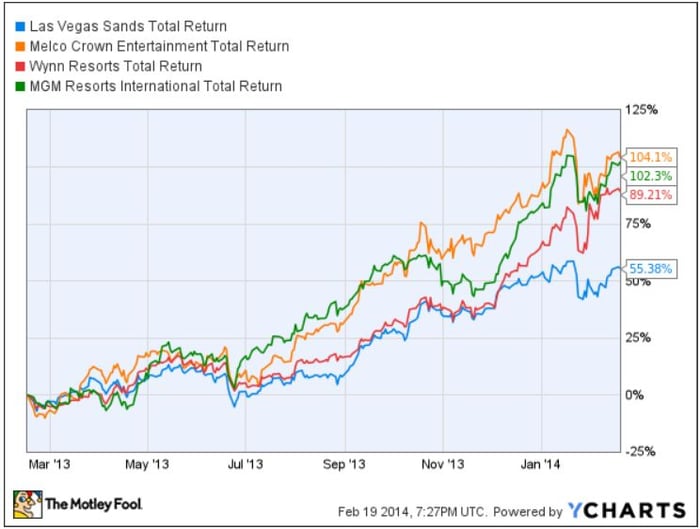 Las Vegas Sands deserves some credit
Las Vegas Sands is the only one of the big four casinos to report lower than expected earnings for the quarter. However, weakness was contained to Singapore, the company´s second biggest market, where total revenue fell by 8% during the quarter. This has been a problematic market for the company lately, and management is increasing its marketing efforts to attract more visitors from the surrounding Southeast Asian region to reinvigorate revenue in the country.

On the other hand, demand is still booming in Macau, where Sands China reported a 28% increase in revenue to $2.53 billion, versus $1.97 billion in the fourth quarter of 2012. Sales in Las Vegas were also quite strong with an annual increase of 25.1%, to $385.7 million, and revenue in Pennsylvania increased 5.3% to $124.1 million during the quarter.

All in all, Las Vegas Sands delivered a net increase in revenue of 18.8% versus the same quarter in the prior year, and earnings per diluted share grew 32.1% to $0.71. Even if both sales and earnings came in below analysts' expectations, investors in Las Vegas Sands have no cause to worry when it comes to assessing financial performance.

City of Dreams produced a 58% revenue boost to $1.1 billion during the quarter. This more than compensated for an 18% decline in Altira Macau to $245 million, while Mocha Clubs delivered a moderate 10% increase in quarterly revenue to $38.8 million.

City of Dreams is still a huge cash flow machine for the company in spite of growing competition from the likes of Las Vegas Sands.

In addition, Melco will continue increasing its presence in Macau with its new cinematically themed integrated resort in Cotai expected to be inaugurated by mid-2015. The company also has ambitious growth plans in the Philippines in coming years.

Wynn makes a winning play
Wynn Resorts is particularly focused on the VIP segment in Macau when it comes to its growth opportunities, and the strategy seems to be bearing good results. Fourth-quarter sales in Macau increased by 24.6% to $1.12 billion, and adjusted property EBITDA reached a record $374.2 million, up 32.1% from the fourth quarter of 2012.

Sales in Las Vegas increased at a much more moderate pace of 2.4% to $400 million during the quarter. However, profit margin was on the rise, and adjusted property EBITDA was $124.2 million, up 7.7% from the $115.3 million in the same quarter of the previous year.

On a total basis, revenue increased by 18% to $1.52 billion in the quarter. With Macau growing at a remarkable rate and profit margin increasing in Las Vegas, Wynn Resorts is looking-well positioned to continue delivering solid performance.

MGM goes for a turnaround
MGM reported better than expected numbers on Wednesday morning. The company is still losing money on a net income basis, but the business certainly seems to be moving in the right direction.

Consolidated net revenue came in at $2.5 billion during the quarter, a 10% year-over-year increase. Adjusted property EBITDA was $609 million, a 21% increase compared to the year-ago $505 million. MGM reported a net loss of $0.08 per share during the quarter, a material improvement versus a net loss of $2.50 per share in the fourth quarter of 2012.

Not surprisingly, revenue growth was particularly strong in Macau, with MGM China delivering a 22% increase in sales. Sales in Las Vegas increased 6% during the quarter, and management reported positive profitability trends there with luxury properties generating a big 18% jump in EBITDA during the quarter.

MGM has come a long way in improving its financial condition and reducing its debt burden over the last years, and the company is planning to double its footprint in the lucrative Macau market, with MGM Cotai set to open in early 2016.

A winning hand
Considering recent financial reports from Las Vegas Sands, Melco Crown, Wynn Resorts, and MGM, the gaming market in Macau remains remarkably strong, and there is no slowdown at sight due to economic deceleration in China. In addition, Las Vegas seems to be improving and generating growing profit margins for these companies lately. These casino operators seem to be dealing a winning hand for investors.