Please ensure Javascript is enabled for purposes of website accessibility
Log In Help Join The Motley Fool
Free Article Join Over 1 Million Premium Members And Get More In-Depth Stock Guidance and Research
By Alex Planes - Feb 19, 2014 at 11:00AM

Financial companies are too heavily represented on America's most-watched index. Here's one way to fix that problem.

Yesterday, we looked at how the 30 components of the Dow Jones Industrial Average (^DJI 0.49%) represent -- accurately or otherwise -- the U.S. economy. As we found out, they aren't particularly accurate representatives of the American business landscape, particularly since financial stocks now account for a quarter of the Dow's value despite contributing less than 7% of national GDP.

"Big deal," you might say, "the S&P 500 (^GSPC 0.41%) is good enough for me!" This broader index of 500 stocks should be a better measure of the American economy, but that may not be true, either -- at the start of this year, tech stocks accounted for nearly 18% of the S&P 500's value despite accounting for, at most, slightly more than 12% of American GDP. Meanwhile, utilities, which accounted for roughly 1.7% of GDP, had an S&P 500 representation nearly twice that size.

For our purposes, it's probably easier to tweak the Dow than it is to tweak the S&P 500 to more accurately represent the nation's economy. All we have to do is start with the sector-based weighting of its 30 components, compare that to the true value of those sectors to the U.S. economy, and then brainstorm the changes that might get us from here to there. Of course, those in charge of the Dow may never heed this sort of advice, but it's an interesting way to see how America's most-watched market gauge might perform if it were a measure of reality, rather than merely of high performance.

Sources: IndexArb and U.S. Bureau of Economic Analysis.
* Sector weighted by combining all relevant sub-sectors and recalculating as a percentage of private GDP, which accounts for 86.5% of total U.S. GDP. Click here for link to source data.

It's important to note that the true economic weights of these sectors don't add up to 100%, or even close to 100%, because some parts of the American economy aren't represented at all on the Dow. For example, construction and real estate combine to produce 19.1% of privately sourced GDP, but they have no representation on the blue-chip index -- the only Dow financial component directly involved in the housing market is JPMorgan Chase (JPM 0.43%), and even so, its mortgage lending is still counted as part of the financial sector, not the housing sector. A wide array of service businesses are also not counted here, with the exception of those directly connected to the tech industry. Those services account for another 7.3% of private GDP.

Can the Dow be rebalanced appropriately? It's unlikely that the index will ever accurately reflect the impact of housing on the American economy, but we can try. If you tallied up the revenue of America's 80 largest homebuilders for 2012, it would still amount to barely 15% of the revenue generated by Dow component Wal-Mart that year.

However, there are plenty of real estate investment trusts to choose from as representatives of the rental-income side of the housing sector. In fact, the largest publicly traded REIT, Simon Property Group (SPG -1.15%), has a share price almost exactly in line with that of recent Dow addition Goldman Sachs (GS 0.93%). Removing Goldman and adding Simon would change the balance, but not enough to account for real estate's value to the economy. There's also the little issue with Simon's smaller real impact on the economy -- it came in 497th on the latest Fortune 500, while Goldman was ranked 68th.

Here's how the Dow might look under this hypothetical shift:

Swapping Goldman for Simon might give the index a boost as well. Over the past five years, Goldman's gains have fallen right in line with the Dow's, but Simon's have far surpassed the index. 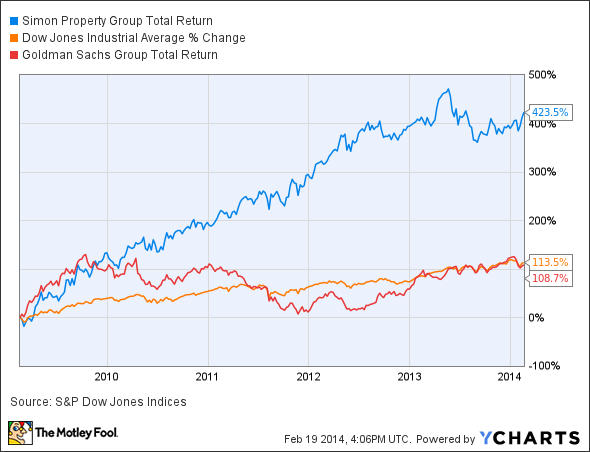 Would you make this change? How else might the Dow be modified to reflect America's economic realities? Let us know what you think by leaving a comment below.

The Motley Fool recommends Goldman Sachs. The Motley Fool owns shares of JPMorgan Chase. Try any of our Foolish newsletter services free for 30 days. We Fools may not all hold the same opinions, but we all believe that considering a diverse range of insights makes us better investors. The Motley Fool has a disclosure policy.