Mall-based jewelers will become a significant presence across the U.S. with big industry tie-up.

He went to Jared. Jewelry-store chain Zale (NYSE: ZLC) is being bought by specialty shop Signet Jewelers (SIG -2.62%) in a deal valued at about $690 million. The $21-per-share purchase price represents a 41% premium to Zale's $14.91 closing price yesterday, which should significantly expand Signet's business in the U.S.

Zale operates almost 1,700 stores in the U.S, Canada, and Puerto Rico under the Zales, Gordon's, and Peoples brands, which will almost double Signet's own network of nearly 2,000 stores that operate in the U.S. as Kay Jewelers and Jared, and in the U.K. under Ernest Jones and H. Samuel.

The jewelry industry enjoyed some higher Christmas-season sales with even Tiffany reporting holiday sales coming in 4% higher, but there were also some cautionary notes added about the immediate outlook. Tiffany kept its guidance steady, which disappointed some investors, while Signet had to cut guidance despite a strong showing in the fourth quarter.

Signet saw sales for the eight-week holiday period jump 7.7%, a big achievement considering that the season was shortened by about a week due to a quirk in the calendar. Its Kay and Jared units enjoyed a 5.6% increase in same-store sales. Even so,Signet says the heavy promotional environment that jewelers find themselves in will take its toll for the quarter when it reports in March, leading it to cut fourth-quarter guidance to $2.12 to $2.16 per share.

Zale's own same-store Christmas sales rose 2%. It was hit hard by the meltdown in the financial markets, recording losses every year from 2009 on. It's been in the midst of a turnaround, and only returned to profitability last year, notching $10 million in net income for the period ending July 31.

Signet says the combined company will generate approximately $6 billion in sales and more than $745 million in EBITDA, while allowing the jewelers to streamline their inventory and reduce expenses as they cross-merchandise brands. Zale, whose chairman joined the board last May and is Signet's retired CEO, will continue to operate under its own banners. 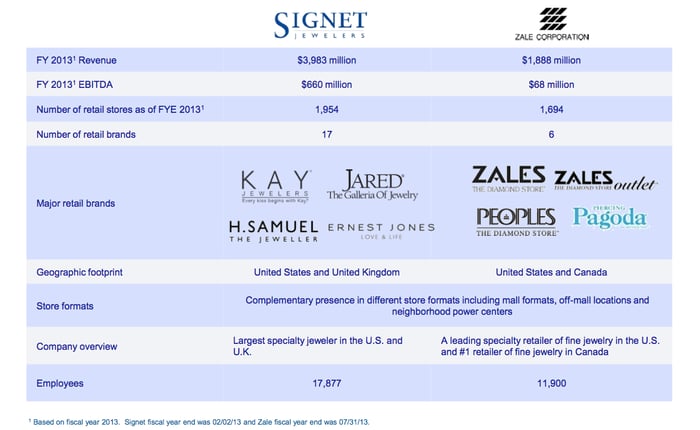 The big winner here seems to be hedge fund Golden Gate Capital, which bailed out Zale with $150 million in 2010, for which it took a stake in the jeweler; it now owns approximately 22% of the company. It also received about 11 million warrants as part of the deal that will be worth about $200 million. The hedge fund, which is also the force behind the sale of outdoor apparel maker Eddie Bauer to men's suits retailer Jos. A. Bank, has entered into a voting support agreement for Signet.

With both jewelers having a big shopping mall presence, and considering the still fractured nature of the market that's going to feel pressure from an economic slowdown, it seems like Signet's made a smart acquisition that could lead to a rollup of smaller shops in the future.