Facebook spent $19 billion on a messaging app with little monetization. But what can Facebook do with WhatsApp?

News broke Wednesday that Facebook (META -6.79%) plans to purchase mobile texting app WhatsApp for $19 billion. WhatsApp's app charges users less than a dollar per year -- after a free first year -- and doesn't display any advertising. So clearly mobile monetization wasn't the motivation behind the acquisition. Why would Facebook want or need to make this purchase?

WhatsApp has 450 monthly active users and 70% -- or about 315 million -- use the app on a daily basis. Facebook stated in an announcement blog post that WhatsApp continues to add approximately 1 million users per day.  That makes for a decent income stream even at the low user price especially considering WhatsApp has spent no money on advertising and only has 55 employees. 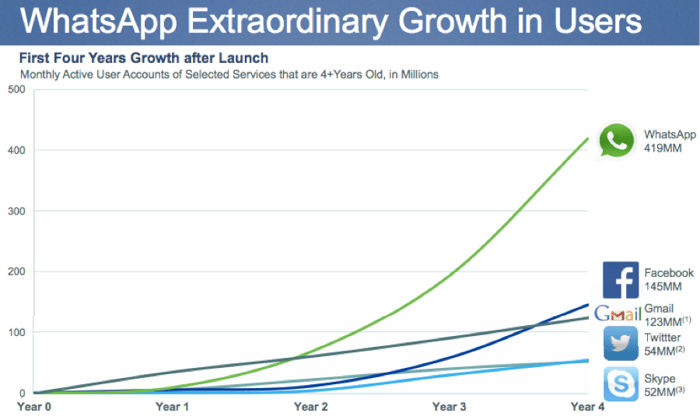 Value of WhatsApp
Facebook makes its money from advertising. But WhatsApp co-founder Jan Koum stated in his own blog post that remaining ad-free was part of the deal terms.  What other use could Facebook have for WhatsApp?

Cross-integration with Facebook's own app? No, Facebook claims in its post that WhatsApp will remain its own independent entity with the staff, offices, and no integration with the social networker's own Messenger app.

The answer to WhatsApp potential is a four-letter word: data.

Data potential
Facebook utilizes user data to create targeted ads that lead to a higher click-through rate, and more money, than a randomly generated ad would achieve. It's safe to assume that there's a strong percentage of WhatsApp users who also regularly use Facebook Messenger. And in those cases, the data potential isn't as great. But WhatsApp remains popular in developing markets where Facebook hasn't achieved a strong foothold.

Facebook wouldn't divulge any demographic specifics during the announcement but traces of WhatsApp's overseas popularity exist. Jana Mobile conducted a small survey that found that WhatsApp was the most popular mobile messaging app among customers in Brazil, Mexico, South Africa, and India.  TechCrunch made a map using some older, publicly available usage data that shows WhatsApp handily beating Facebook's Messenger across Europe, South America and Asia. The only place WhatsApp hasn't caught on is the United States, where wireless carriers make data more expensive than texting charges.

The WhatsApp purchase could help Facebook gain more data in the overseas regions, which the company can use toward better monetizing and targeting its own products in the name of boosting a key growth metric: average revenue per user.

Here's a look at how the average advertising revenue per user compares between the U.S. and Canada, Europe, and Asia:

Is WhatsApp worth $19 billion?
There's some sticker shock built into this deal since Facebook only paid $1 billion for Instagram and offered up $3 billion in an attempted bid to purchase Snapchat. The WhatsApp sales figure works out to about $42 per monthly active user -- or over $60 per daily active user. But WhatsApp was in the position of power.

Facebook needed to purchase WhatsApp if the company didn't want to abandon any hope of achieving a strong mobile presence overseas. WhatsApp was already too well adopted before Messenger became a decent enough app to act as a real contender. And Facebook stepping in for the buy keeps the acquisition out of Google's (GOOGL -2.51%) hands, which also helps keep Gmail's line below Facebook Messenger on that chart at the top of the page.

But monetization will remain a problem in the near future since Facebook doesn't consider this a priority. The announcement call reinforced the fact that Facebook wants to help WhatsApp continue to grow its userbase without any interference with monetization tactics such as advertising or subscription price raises-both of which would likely drive users straight to one of the numerous free WhatsApp competitors. Facebook sees the potential for WhatsApp to hit 1 billion users, which would help take care of that monetization issue even at the low subscriber price.

Foolish final thoughts
One of the reasons Facebook hit rocky ground post-IPO was that many investors didn't understand how the social networking site monetizes -- or the fact that monetization isn't always Mark Zuckerberg's top priority. The WhatsApp purchase offers a way to gather substantial user data among groups not as likely to use Facebook. But it will take time to see how Facebook will utilize that data for its own monetization purposes-and hopefully to make the deal worth the $19 billion price tag.