Garmin beat analyst estimates, as most of its segment grew. But the largest segment's decline and impending competition could spell future trouble.

Garmin (GRMN 0.64%) shares opened Wednesday up more than 10% following the pre-market fourth-quarter report. Revenue was down by 1% but beat analyst estimates. The company's aviation, outdoors, and fitness segments showed strong growth. But the automotive and mobile segment continued to tank and could continue downward this year with new product launches from Apple (AAPL -2.54%). How healthy was Garmin's fourth quarter?

But the growth history of Garmin's segments shows that it's hard to predict the company's future performance. And additional competition coming down the line won't make that process any easier.

Auto stays weak, while aviation grows
Garmin's automotive and mobile segment posted a year-over-year loss for the fifth quarter in a row. The segment fell 12% to $383 million, and the loss means that the other segments, added together, now account for half of total revenue. 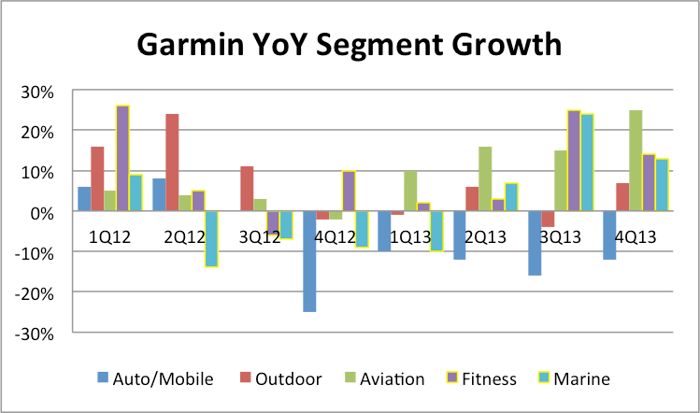 Aviation showed the strongest improvement with a 25% increase over the previous year's quarter, to about $70 million. During the fourth quarter, LearJet and Cessna both earned final certification for flight decks using Garmin technology. Garmin continues to pursue certifications with other original equipment manufacturers, and aviation remains Garmin's greatest growth segment.

Outdoor posted a 7% gain in the quarter, to $127 million, based partly on the release of VIRB action cameras last fall and the fourth quarter's launch of new golf products. These products should help drive outdoor's growth into 2014.

But outdoor has an inconsistent growth history, and that's a problem shared by marine, which grew 13% in the quarter, to $45 million. Marine could benefit this year from the launch of two new sonar products, and Garmin has shown financial dedication to making this segment work.

Fitness grew 14% to $119 million, based on strong holiday sales for the Forerunner running watches and the Edge Touring device for bicyclists. Garmin also launched the activity fitness band Vivofit and the forthcoming Vivoki.

The fitness band market has exploded in the past year. That's a problem for Garmin.

Coming late to a competitive party
Garmin's strength was once getting to a market first, setting high prices, and reaping the profits until cheaper-priced competitors managed to make it out of the development pipeline. But that tactic isn't working as well these days in the consumer-focused markets.

Apple's competition in the automotive space will soon increase with the launch of iOS in the Car, which has so far become integrated into vehicles from Chevrolet, Honda, Ferrari, and Mercedes-Benz. The car features would allow drivers to access both Maps and standard iOS features, which would make the product have a broader lifestyle appeal than Garmin's GPS units.

Rumors are swirling that Apple is about to enter the realm of wearable fitness devices. Fitness bands, in particular, have gained popularity, thanks to products from Nike and the privately owned companies Fitbit and Jawbone. So, it could prove difficult for Garmin to secure a significant part of the wearable fitness device market without resorting to steep price cuts.

Foolish final thoughts
Garmin's growth segment remains aviation, where there's less competition and more room for aggressive pricing. The outdoors segment performed well in the fourth quarter but has a more inconsistent growth history -- and marine is in a similar boat. Fitness will likely lose ground if Apple does launch a wearable fitness product. But the real problem is that automotive and mobile is consistently declining, but still accounts for half of total revenue.

Brandy Betz has no position in any stocks mentioned. The Motley Fool recommends Apple. The Motley Fool owns shares of Apple. We Fools may not all hold the same opinions, but we all believe that considering a diverse range of insights makes us better investors. The Motley Fool has a disclosure policy.