One of the world's largest wireless carriers has many moving parts. Let's take a look at some of them.

The Dow Jones Industrial Average (^DJI -1.03%) is up by roughly 0.7% this afternoon, shrugging off early fears that the Federal Reserve might ratchet up its taper efforts, worries of an accelerating economic slowdown, and even manufacturing weakness out of China. One big reason for the Dow's day in the green is Verizon Communications' (VZ -0.49%) big day -- the telecom giant is up 3.5% so far thanks to analyst upgrades and news that the Federal Communications Commission will rewrite net neutrality rules rather than appeal its recent court loss against Verizon on the matter.

As one of the most widely held stocks on the market -- there are roughly 2.7 million Verizon shareholders, although the vast majority of shares are held by 5,063 institutions or mutual funds -- Verizon is undoubtedly one of the most closely followed stocks. But this massive company has so many moving parts that it can be easy to miss out on some interesting facts. Did you know:

If you bought a share of Verizon stock today and its price and dividend payouts stayed the same, you would make your money back after about 23 years.

If you bought a share of Verizon stock today and its price and dividend payouts stayed the same, but you reinvested your dividends in new shares, you'd double your holdings in just 16 years.

Verizon joined the Dow on April 8, 2004, and has outperformed the index by 82% since then: 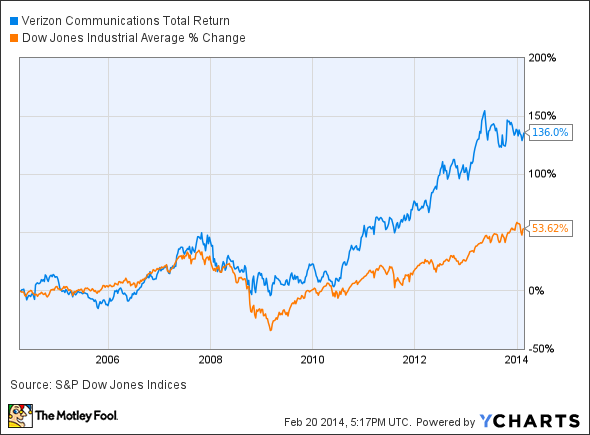 Bell Atlantic -- the company that went on to form Verizon -- was one of the seven "Baby Bells" formed after the forced breakup of the original AT&T (T 2.24%) telecom monopoly in 1984.

Thanks to its connection to the original AT&T, Verizon can credibly claim an uninterrupted dividend history that stretches back to 1893.

Over the past 10 years, Verizon has paid out $67 billion in dividends, enough to buy almost half of itself at current price.

Verizon employs more than 180,000 people and maintains health care coverage for about 800,000 current and former employees and family members.

Verizon began operating on June 30, 2000, after Bell Atlantic and GTE merged. At the time, Verizon served 77 million wireline customers and roughly 23 million wireless subscribers (although it only held a 55% stake in Verizon Wireless at the time).

Verizon's $130 billion purchase of the remaining 55% of its Verizon Wireless unit from Britain's Vodafone (VOD -1.81%) ranks as the third-largest deal in history, behind Vodafone's own $185 billion buyout of Germany's Manesmann.

If Verizon Wireless can maintain the roughly 40% EBITDA margin it boasted in 2013 and continues to generate roughly $80 billion per year in revenue, Verizon will recoup the purchase price on that 45% stake, on an EBITDA basis, in roughly nine years.

Do you know any facts about Verizon you think I've overlooked? Let everyone know what you know by posting a comment below.

The Motley Fool recommends Vodafone. We Fools may not all hold the same opinions, but we all believe that considering a diverse range of insights makes us better investors. The Motley Fool has a disclosure policy.