The next-generation Xeon E7 finally hits the shelves, and it looks like a monster!

Intel (INTC -1.11%) announced the long-overdue successor to its 2011 Westmere-EX, or Xeon E7, processor, codenamed Ivy Bridge-EX, and branded Xeon E7 v2. The product is an engineering marvel that offers twice the performance of its predecessor, on average, Intel says. More important, this product makes Intel even more competitive with traditional big-iron RISC players Oracle (ORCL 0.19%) and IBM (IBM -0.26%) on a basis combining performance per watt and price. Intel is likely to gain further share with these puppies.

The market share picture looks great
Take a look at the following slide from Intel that details revenue share of Intel's processors Xeon E7 and higher-end variants of Xeon E5 against competitors IBM and Oracle: 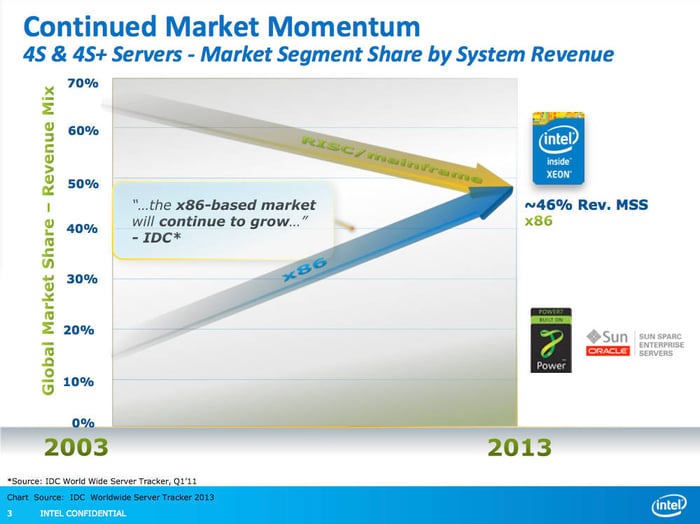 While Intel-based servers have about 46% of the revenue share of 4-socket systems, Intel claims that its actual unit share is more along the lines of 80%. This, according to an interview with The Register, is due to the fact that Intel-based systems are significantly cheaper. This cost advantage is likely driven by a number of factors, including:

Indeed, according to this Intel slide, the company has a pretty significant upfront system cost advantage, as well as pretty decent performance advantages, over the SPARC/POWER competition: 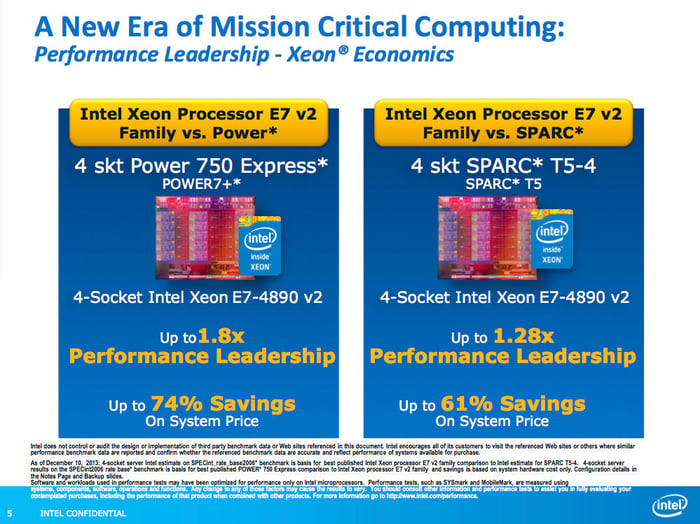 It only gets better from here
While IBM and Oracle face continued difficulties with their hardware sales -- thanks in part to a weak macro-economic environment, but also due to market share loss -- Intel continues to invest heavily in its own processors. That leads to a rather virtuous cycle that leads to more investment in Intel's chips, both on Intel's part and from the software vendors, and a decreased investment in POWER/SPARC. As long as Intel can keep up the pace of innovation, it should continue to grab high-end server share.

Foolish bottom line
IBM is likely to refresh its POWER-based systems this year with POWER 8, which should win it back the performance crown against Xeon E7 in a 4-way system. Oracle doesn't seem to have any plans of giving up its own hardware development. But it is clear that Intel's big-iron efforts get stronger with each passing day.

While Intel is rightfully criticized for its stumbles in mobile, it's hard to deny the great execution and superb economics of Intel's server processors, from the highest-end Xeon E7s to the lowest-end Atom-based parts. Now, if only the enterprise market would recover, Intel could finally hit that 15% compound annual growth rate in data-center group revenue it keeps promising investors.