Has McDonald’s become a rise and fall story? What restaurant chains are really the biggest threats? Is McDonald’s capable of finding a new direction?

McDonald's (MCD 1.07%) CEO Don Thompson recently stated that his company had a customer relevance problem. That's not a good problem to have. Therefore, you might think that McDonald's shouldn't be considered as a potential investment option. It comes down to your investment strategy and risk tolerance. If you would prefer to invest in a restaurant chain that is growing rapidly, then you should consider Panera Bread (PNRA) or Chipotle Mexican Grill (CMG 4.78%). We'll take a look at some of the reasons why as well as what to expect from McDonald's.

Losing relevance
For decades, McDonald's offered a special treat for families across the United States. It was the ultimate destination for burgers, fries, and a fun playground for the kids. Today, McDonald's is more known for its unhealthy food, unhappy employees, and dirty bathrooms. Of course, there are exceptions to these rules, but you can't argue with mass perception. McDonald's also must contend with increased competition, but that competition often isn't viewed correctly.

Many people think that McDonald's primary competition is Wendy's and Burger King. If you're thinking along the lines of burgers and fries, then yes, this is accurate. However, McDonald's was capable of dominating this competition for many years when they were the key players in the game. Today, a much different environment exists.

The target market is millennials. They're the largest generation since baby boomers and therefore will have the most spending power for the foreseeable future. Unlike baby boomers, these consumers opt for healthier and cleaner options in their younger years, such as Panera Bread and Chipotle Mexican Grill. The adjective "cleaner" doesn't just pertain to the food but the restaurants as well. 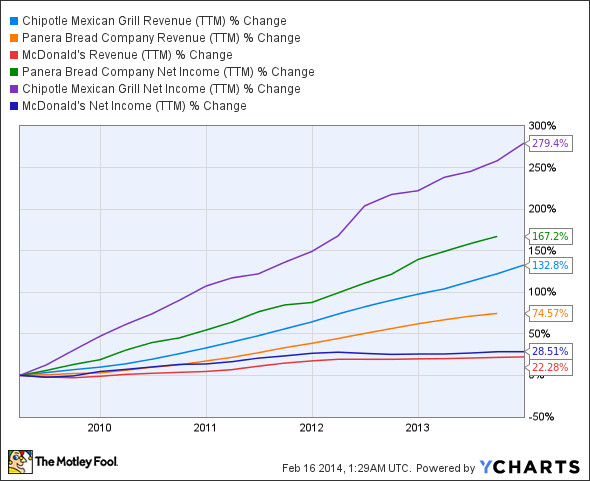 If you look closely, then you will see that Chipotle Mexican Grill is the fastest- growing restaurant chain of the bunch over the past five years. Now look again. This doesn't just go for the top line but the bottom line as well. What more could an investor want? Perhaps a Chicken Salad Bowl.

What can McDonald's do to solve the problem? One, it can simplify its menu with an increased focus on healthy food items. Two, it can go the completely opposite route and go back to focusing on simplicity with its burgers and fries (and an emphasis on clean bathrooms wouldn't hurt). Three, it can make its restaurants more entertainment-themed for kids to drive more families to its restaurants.

Whatever route it chooses (answer below), clarity is imperative. Recently, McDonald's has been playing hot foot on two different paths. For instance, McDonald's currently offers a dollar menu "Dollar Menu and More" with prices ranging from $1 to $5. This is like a dollar store selling items between $5 and $10. Consumers love simplicity. McDonald's needs to choose one approach and stick with it. The numbers below prove that something must be done.

Recent results
McDonald's suffered a 3.3% comps decline in January on a year-over-year basis. This followed a 3.8% slide in December. At least November wasn't quite as bad, with comps dropping only 0.8%.

Franchisees have been complaining about a complicated menu, which makes their jobs harder and frustrates customers. Looking ahead, McDonald's plans to simplify its operations, and its focus will have nothing to do with the dollar menu. Instead, McDonald's will focus on McCafe (primarily coffee) and breakfast. It has yet to be reported what McDonald's will focus on when it's not breakfast time, but at least a direction has been established.

McDonald's is also attempting to reach more millennials through technology, including its McD App, which is basically a digital coupon. However, it's not that easy. Millennials aren't robots infatuated with technology. Rather, they use technology to buy something they want for convenience purposes. Therefore, McDonald's must first offer something that's in high demand before it expects to see significant growth via technological initiatives.

The Foolish bottom line
McDonald's still has growth potential thanks to its massive cash flow generation and global brand strength. And if you're looking for dividend payments, then you might enjoy a 3.4% dividend yield. However, McDonald's needs to establish a direction quickly. If it loses the millennials, then it's going to die a slow death. This isn't a likely scenario but still a scary possibility for the former powerhouse. If you would prefer to invest in a restaurant chain that's on-trend, then you might want to consider Panera Bread or Chipotle Mexican Grill. Please do your own research prior to making any investment decisions.