Tesla Motors, Inc. consistently outperformed throughout 2013 and has great growth prospects, but it's still not worth buying today.

Tesla Motors (TSLA 4.88%) delighted bulls once again with a phenomenal Q4 earnings report, capping off its best year ever. While Tesla initially projected that it would deliver fewer than 6,000 Model S cars in Q4, it ultimately crushed that guidance with a record 6,892 deliveries during the quarter.

Tesla is on a rapid growth path and should see big increases in sales over the next several years as it adds new models to its lineup, starting with the Model X crossover. Nevertheless, Tesla stock is just too hot to handle now. 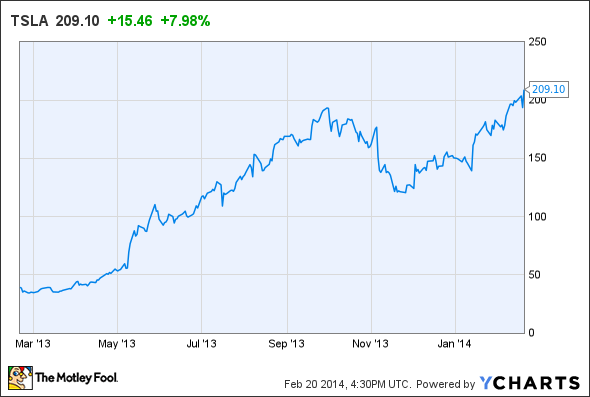 A few months ago, I noted that Tesla stock was starting to look attractive again because it had a clear path to more than quadrupling annual sales to the 100,000 level by 2016. The company's recent earnings report confirmed that this goal is very achievable. However, the stock has risen nearly 75% since early November, making it too pricey compared to the scope of its opportunity.

Strong growth platform
In Tesla's Q4 earnings release, management projected that the company would deliver 35,000 cars in 2014, representing a 55% year-over-year increase. By the end of the year, Tesla expects to be building roughly 1,000 cars per week, which would potentially allow it to produce 50,000 Model S cars next year.

Model X development also remains on track, and Tesla expects to start producing prototypes on its assembly line later this year, before starting mass production in early 2015. Furthermore, CEO Elon Musk stated that Tesla is seeing strong customer interest for the Model X even though it is not actively selling that model yet. As a result, Musk thinks Model X demand will eventually exceed Model S demand.

Since Tesla still seems to have a way to go just to meet demand for its Model S sedan, it's pretty easy to see how the company could be selling 100,000 or more luxury vehicles by 2016.

China could become a particularly lucrative market for Tesla in the next few years. The Chinese luxury auto market is already large and it is growing rapidly. While lots of global automakers have a head start there, most automakers sell luxury vehicles for a big premium in China.

By contrast, Tesla aims to sell the Model S and Model X closer to the prices it charges in other markets. This will make the relative cost of a Tesla compared to other luxury cars much lower in China than in other markets. Furthermore, with the Chinese government eager to cut pollution in big cities, Tesla cars may become eligible for subsidies.

The big long-term opportunity
Looking out a little further, Tesla hopes to develop a more affordable car with a base price of $30,000-$35,000 by 2017. The key to building a Tesla-quality car at that price point while still earning a good margin is reducing battery supply costs.

Next week, Tesla will roll out initial plans for a battery "Gigafactory" that will have more lithium ion capacity under one roof than exists in the whole world today. This concept could potentially provide a means of reducing Tesla's battery costs to a level that would provide a long-term moat.

However, the success of this plan ultimately depends on two big unknowns: how low Tesla can push battery costs and how much of a premium mass-market car buyers are willing to pay for a Tesla electric vehicle.

Valuation is the key
Thus, I feel confident about Tesla's ability to push Model S and Model X production to 100,000 vehicles per year by 2016, and I think the "affordable car" concept holds a lot of promise. Still, that's not enough to justify investing in Tesla with the stock trading for more than $200. Including the shares that will likely be issued over time due to outstanding stock options and warrants, Tesla's market cap is now roughly $30 billion.

As Tesla continues to add more stores, service centers, and Supercharger stations to support its global growth plans, investors should expect operating expenses to continue skyrocketing. When all is said and done, Tesla's after-tax profit will probably be less than $1 billion even if it reaches these aggressive growth targets by 2016.

If Tesla shares generate a market rate of return over the next few years, the stock would still maintain a lofty valuation by the end of 2016 in that scenario: around 50 times earnings. Thus, to invest in Tesla today, you have to be confident that Tesla will be able to push high-end-vehicle sales well past 100,000 per year or that it will be extremely successful in the mass market.

Foolish bottom line
Either one (or both) of these bullish scenarios could materialize in the next decade. However, considering the amount of investment necessary for Tesla to become a global automaker and the fact that Tesla shares already valued at $30 billion, investors will need a decade of flawless execution to beat the market. At this point, there are better growth bets than Tesla in the market.