Tesla bulls point to the company's battery technology and Supercharger network as long-term competitive advantages. However, they may be exaggerating their case.

Lots of competitors are knocking on Tesla Motors' (TSLA 4.53%) door. Just this month, two of the three largest global automakers announced big plans to grow in the electric car market. Volkswagen is aiming to become the leading global producer of electric and hybrid cars by 2018.

Meanwhile, General Motors (GM 5.55%) disclosed that it's developing an electric car with 200 miles of range that could sell for $30,000 . The technology for such a car already exists, but the price of batteries is currently too high to make the low price point feasible.

With formidable competitors swarming into Tesla's market niche, can Tesla hit its ambitious growth and margin targets? In large part, the answer to that question turns on the strength of Tesla's "moat": its sustainable competitive advantage. Unfortunately, that moat may be a good deal smaller than most bulls assume.

Strong demand for Tesla's Model S sedan has shown that there is an ample market for electric cars. However, Tesla stock has rocketed nearly 400% higher this year largely because bulls have become increasingly confident that Tesla will dominate the electric vehicle market over the long term. 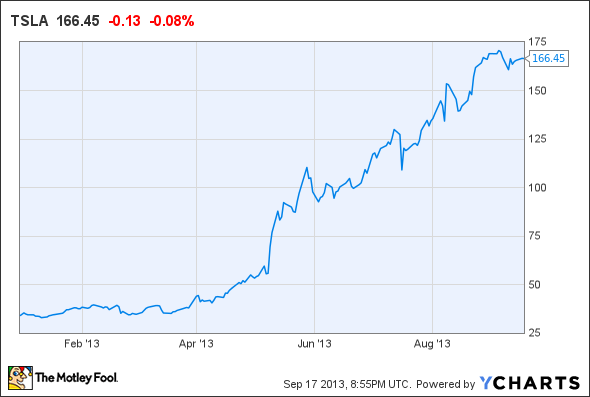 Bulls expect Tesla to expand production from just 21,000 vehicles this year to 500,000 vehicles before the end of the decade. This tremendous increase would be driven primarily by the introduction of a more affordable car that would cost around $35,000 and deliver 200 miles of range. However, if Tesla has to split the EV market with GM, Volkswagen, and other established automakers, this production goal will be hard to reach.

Tesla's biggest edge is probably its technology. Most notably, Tesla uses a proprietary system for monitoring and cooling its massive battery pack, which allows it to use relatively cheap commodity battery cells. By contrast, mainstream automakers have been using custom-designed battery packs that are produced in much lower volumes, and are therefore much more expensive.

This gives Tesla a huge cost edge over GM and other competitors . (Today, the cost gap is probably tens of thousands of dollars for a battery capable of delivering 200 miles of range.) However, I am extremely skeptical of the idea that this advantage will remain intact over the long term.

First, mass automakers may find a work-around that would allow them to take advantage of cheap commodity battery parts, too. After all, the batteries themselves are commoditized! Tesla's only real advantage is the monitoring system.

Second, the cost of custom-designed auto batteries is likely to drop significantly as production volumes increase. With nearly every major automaker ramping up production of hybrid, plug-in hybrid, and electric vehicles, battery production is growing quickly. Executives in the battery industry expect the cost of lithium-ion auto batteries to drop by at least 50% by 2020 . This will probably cut down on Tesla's battery cost advantage, though it may not eliminate it.

Superchargers to the rescue?

Tesla bulls also point to the company's growing network of Supercharger stations . These allow Tesla owners to recharge their batteries for free. The Superchargers take as little as 20 minutes to deliver a half charge, making road trips feasible. Moreover, Tesla plans to put 98% of the U.S. population within range of a Supercharger by 2015.

The Supercharger network is clearly a major competitive advantage for Tesla over other electric vehicle manufacturers -- for now. However, Superchargers are not very expensive to build . As a result, if GM or other automakers decide to go "all-in" on electric vehicles, they can just build their own networks of high-speed charging stations. This could take several years to implement, but the fact remains that the Superchargers do not create a long-term moat for Tesla.

It's far from clear that Tesla has a sustainable moat. While the Supercharger network gives it a big advantage over other electric vehicle makers today, there's nothing to stop competitors from replicating the network.

Battery costs are the one area where Tesla may have a sustainable competitive advantage. While other automakers are likely to narrow the battery cost gap substantially over the next 5 years or so, Tesla may maintain enough of an advantage to keep its margins well above the industry average. Still, there is no guarantee that this bullish scenario will play out.  As a result, this investing thesis cannot justify buying Tesla at the current price.