Tesla isn't a secret anymore, and the company remains one of the hottest stories on Wall Street. Here's why the fourth quarter convinced me its massive potential is worth an investment.

Few companies offer a story as intriguing as that presented by Tesla Motors (TSLA -4.59%). The young company, which produces only electric vehicles, certainly has the potential to change the way the world views transportation sans gasoline. That said, its infrastructure battle is one that the company largely fights on its own, and it will take time to make transportation by electric vehicles as easily feasible as it is by internal combustion.

Meanwhile, by GAAP standards, the company and all its potential is still unprofitable. Despite its continuous burning of cash, Tesla's growth story is so compelling investors continue to jump on the bandwagon -- a pattern that baffles Tesla bears. Here are some details from Tesla's fourth quarter and how I view the stock as of today.

By the numbers
Tesla's bears will quickly point out that the company lost $16 million, or $0.13 earnings per share by GAAP accounting standards. However, with such a young and potentially revolutionary company, the bottom line isn't as important right now. What's important is current growth and laying the track for future growth. Tesla continues to deliver on those two promises and that continues driving the stock price higher.

Last quarter Tesla delivered 6,892 vehicles and totaled 22,477 vehicles for the full year. That translates to more than $2 billion in sales on a GAAP basis. In terms of future growth Tesla expects to increase sales by about 55% this year to 35,000 Model S vehicles. Keeping in mind that Tesla historically under-promises and over-delivers, here's what its minimum growth expectation looks like. 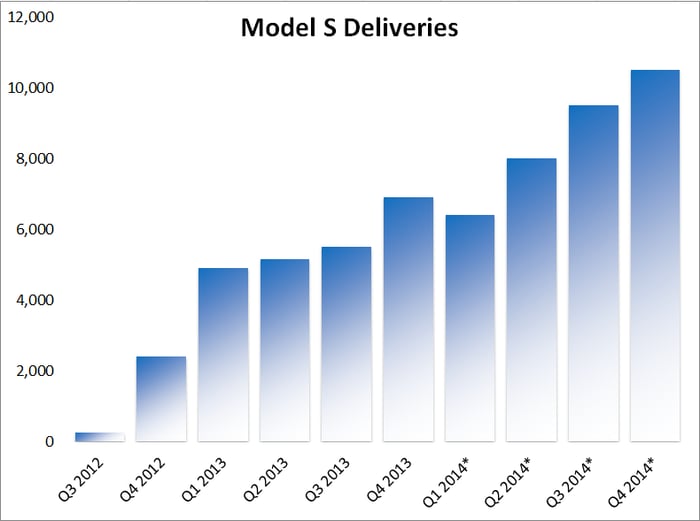 As the company is still saddled with a problem that most companies would prefer to have -- its demand exceeds supply -- Tesla will focus on accelerating production this year. Currently the electric vehicle maker produces about 600 cars per week, and plans to reach 1,000 cars per week by the end of the year as bottlenecks are removed and efficiency is improved.

Nearly as important as its production ramp up and its delivery figures is the profits derived from each vehicle. Tesla met its goal of reaching a 25% gross margin, excluding Zero Emission Vehicle Credit sales, and reached 25.8% on a GAAP basis in the fourth quarter. That's just the beginning of the story, as the company plans to reach 28% by the end of this year -- and that's planning on a lower amount of premium priced options on its vehicles! There is clearly room for a surprise in terms of gross margin by the end of 2014.

As promising as the improving gross margin and production figures are, what is perhaps the most thrilling to see from management was this tidbit from the company's press release: "Please note that Tesla is not trying to achieve the absolute highest possible gross margin, as this would require following the industry practice of charging excessive prices to customers in certain markets, which we believe is inconsistent with building long term loyalty."

That follows the company's recent ethical stance regarding its Model S price in China. Tesla refused to increase the price more than necessary to cover extra costs associated with selling in the region, as the rest of the automotive industry typically does. I'm paraphrasing here, but the company believed cheating the customers by irresponsibly inflating the prices on its products isn't a good way to build consumer loyalty -- I'm in sound agreement.

With Tesla's story looking promising in terms of gross margins, production, demand, and ethical standards, it paves the way for its future vehicles -- which will be a huge driver of the stock price throughout the remainder of the decade.

Model X and Gen III
Tesla's Model X is planned for a late 2014 release with a significant ramp up in production set for next year. While Musk doesn't give out specific details, judging by deposits the initial demand for its Model X is significant. Consider that during a record-setting quarter for deliveries, Tesla's deposits still rose from $140 million to $163 million. That suggests demand remains healthy for the Model S and is building for the Model X; or as Musk puts it, it's like fish are jumping into the boat, since the company isn't even trying to sell the Model X.

As the Model S continues to increase company sales globally, the Model X will help grow revenues to support progress on the company's more affordable Gen III vehicle -- a hugely important step for the young start-up company to become a major player in the automotive industry. While that step is years away, important details regarding Tesla's plan for building its battery factory are set to be released next week. Tesla's factory will enable it to achieve a "major reduction" in the cost of its battery packs and even accelerate the pace of its battery innovations. This will be a crucial element to making a feasible and affordable Gen III vehicle.

Foolish bottom line
Tesla's story is a compelling one, one that could change the way consumers and investors view transportation around the globe. I'm bullish on its current products and excited for its future vehicles. I'm bullish on the way the company does business, and Elon Musk is a savvy business visionary. Wall Street seems convinced, as the stock is up nearly 10% after the fourth quarter results and is cruising past previous highs.

Despite the high stock price, if you invested now and the company delivers on future potential you would still likely be handsomely rewarded on your investment. Tesla's story is still in the early innings and, as in life, there are many hurdles the company faces. Eventually the company will hit a speed bump and its stock price will surely take a whacking in the process -- and I am waiting for that opportunity to jump on board. For those of you who are already on board, enjoy the ride, this could be a once in a generation story.