For me, the world's largest social network has become a junkyard of updates from people I don't really know and ads for products I don't care about.

NEW YORK (AP) -- When I used WhatsApp to tell my family about Facebook's $19 billion purchase of the company that makes my favorite app, I punctuated the message with a string of crying emojis (cartoon faces).

I'm paranoid that Facebook's massive data-gathering operation will enable advertisers to stalk me based on intimate conversations I have with loved ones on WhatsApp. 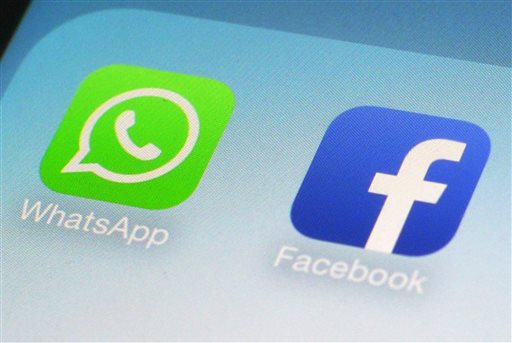 The WhatsApp and Facebook app icons on an iPhone. AP Photo/Patrick Sison

I started using the phone messaging service six months ago at the urging of my cousin, who was visiting New York from Israel. Since then, it's become the primary way I connect with friends and family across three continents -- cheaper, easier and more fun than calls, texts, videoconferences or email.

What makes WhatsApp so great? Sending photos and videos that you take on your phone is simple and quick, just a few taps, even for my technophobe mother. It lets Android and iPhone users talk in groups, which doesn't work well with standard text messaging. A group chat is easy to set up, and once you create the group, it's always there. Conversations with people overseas are instantaneous and free. You don't need to remember a password or sign in after you've set up an account. It's always on, but the app doesn't bug you unless you have a message. It lets you know your messages have been delivered and seen. Also, there are no annoying ads.

WhatsApp is my respite from Facebook. For me, the world's largest social network has become a junkyard of updates from people I don't really know and ads for products I don't care about. It's all about people jostling for publicity and craving approval, seeking likes and comments from near-strangers.

But WhatsApp is the best stand-in for a conversation you have over dinner with people you love. It's intimate. It's personal. I rely on it.

I grew up eating dinner every night with my parents and two sisters. These days, the five of us live in three different cities. Even so, we have a running conversation, sometimes with dozens of chats, photos and videos a day. We send pictures of food we're eating or cooking. (A lot of those. We like food.) We've traded city views from the tops of mountains, thoughts on TV shows and movies we're watching, information on flights we've booked, and simple messages saying "hi" and "I miss you."

Of course, WhatsApp isn't perfect. To start talking to someone, you have to add him or her as a contact to your phone's address book: That's annoying. Even so, WhatsApp is faster than email, which my mother and sisters don't check that often, and easier to follow than a 5-person phone call.

What's more, my cousin in Israel sends videos of her toddler -- who my sisters have never met -- to our 10-person family chat. Everyone oohs and aahs in Hebrew and in English. I set up a subgroup that allowed my father and a cousin to discuss details of a family trip to Hungary. I used to keep up with my cousins in Argentina and a Turkish friend on Facebook. But chatting with them on WhatsApp saves me from logging on to Facebook and being inundated by its newsfeed.

And if a group of friends or family is all in the same place, a rare occurrence, arranging a meet-up is a snap. On WhatsApp, everyone has all the information at the same time.

I removed the Facebook app from my phone a few weeks ago. With WhatsApp, I don't need it. I still use Facebook's Messenger app, but WhatsApp is better. Will the two eventually merge, diluting WhatsApp's appeal?

Facebook says it won't run ads on WhatsApp. But I'm afraid they won't be able to help themselves. With all those food pictures, won't Facebook figure I want to see ads for restaurants and cookware? And will Facebook urge my "friends" to connect with me on WhatsApp? Facebook has done something similar with Instagram, the photo-sharing app it has owned since 2012.

After the Facebook deal was announced, I sent a WhatsApp text to a friend in San Francisco:

"Ya, time to kill (your) acct," he responded a few hours later.

He was joking. Kind of. We're still chatting (and sending each other strings of emoji) on WhatsApp. For now.