These lyrics, from a DirecTV (NYSE:DTV.DL) ad last year, showed a comedic side to the Manning brothers many hadn't seen. Peyton's fake mullet and Eli's nonexistent flow were ridiculous. But there's a lot of truth to the rap.

According to Nielsen's latest Year in Sports Media Report, a lot of people really do love football on their phones. Ten million Americans used mobile fantasy football apps at the beginning of the 2013 NFL season, mostly from Yahoo! (NASDAQ: YHOO) and Disney's (NYSE:DIS) ESPN. Last September, each user spent over a half an hour per week checking their fantasy team, opening their app of choice nearly once a day.

Depending on how much you play fantasy sports, it may or may not surprise you that the average fantasy football fan is a fanatic -- CSA and The Aspire Group found that 60% of all users manage three or more teams at once. But it comes as no surprise to the companies involved in this marketplace.

The business of mobile fantasy football
If Nielsen's statistics are correct, about two of every five fantasy footballers use a mobile app. The Fantasy Sports Trade Association approximates that the 25.8 million people who play spend nearly $2 billion  each year on league fees and analytical tools like Bloomberg's Decision Maker, ESPN Insider, Fantasy Football Xtreme, and ScoutPro.

Although exact figures vary, the "big four" of Yahoo, ESPN, CBS (NASDAQ:VIAC) Sports, and NFL.com make somewhere between $5 billion and $10 billion in additional ad revenue. Forbes estimates that when players' opportunity cost is included (the value of lost wages), the total value of the fantasy football market is between $40 billion and $70 billion annually. That trumps the NFL by as much as sevenfold, and at its peak approximation, is about 75% as big as the entire video game industry.

The next generation
It's clear fantasy football is enormous, and mobile is a huge part of the business. But if you're asking what's next, that's a tougher question. The number of mobile fantasy football users grew by 15% from one year ago, twice as fast as the growth experienced by the overall industry. Similar expansion over the next decade projects fantasy football will have 60 million users by 2024, with almost three-quarters of the market accessing the game through an app. 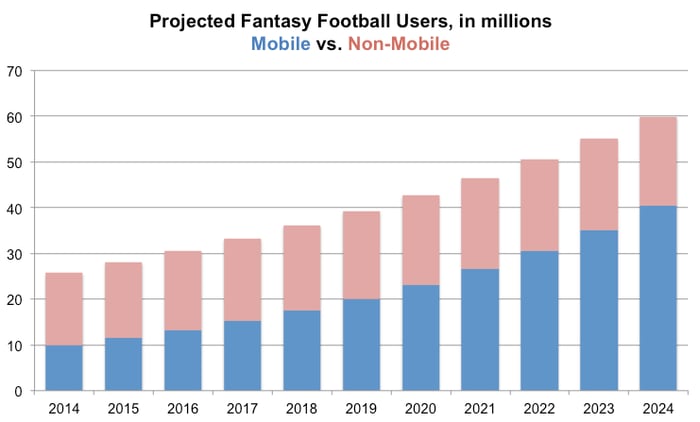 As this vision becomes a reality, fantasy providers should place an even greater focus on mobile. The league's own fantasy game, for example, now has 3 million players, about one-third the size of Yahoo! or ESPN's service.

Much like stadium upgrades and social media interaction, encouraging football fans to become fantasy GMs is good for retention. "Even if your team isn't playing well," Commissioner Roger Goodell said last month, "you're still following your fantasy league or … your mobile device."

The future
While it's impossible to predict exactly what the next generation of fantasy football will hold, major providers like ESPN and Yahoo! are keeping a close eye on the NFL. The league's RedZone and Game Rewind products give it a significant streaming video advantage over any other service. In addition, the sheer number of resources at its disposal suggest that eventually, the fantasy landscape may become less duopolistic.

Going forward, I also expect analytical tools to place a similar importance on mobile. The market's already worth billions, but there's significant upside on the horizon. By the middle of the next decade, it's safe to say the majority of players will be using their phones "for footballing."

Peyton and Eli were right all along.