Titan Machinery is operating in some difficult markets right now, and there is a lot of uncertainty around its prospects in 2014.

The only thing for sure about Titan Machinery's (TITN -1.06%) next set of results is that they are likely to spark some significant volatility in the stock price. The agriculture and construction dealership faced a multitude of issues in 2013, not least from strong competition from Deere (DE -1.96%) and AGCO (AGCO -2.69%) in Titan's core agricultural market. Meanwhile, Caterpillar's (CAT -1.51%) attempts at reducing construction machinery inventory are likely to have hurt its other segment.

Moreover,Titan's main supplier, CNH Industrial (CNHI -1.92%), has been rolling out machinery with new Tier 4 technology (higher emission standards), and Titan has found it hard to pass pricing on to its customers. All told, the stock has had a lot of bad news priced in and is down nearly 47% in a year. Is now the time to buy it as a value play?

Titan or Titanic?
Not only is the subheading a worthy stab at a Pullitzer, it also represents the quandary facing potential investors in Titan. The stock trades at a price of around $16 right now, representing a significant discount to its book value of around $19. In normal circumstances, this would look like an attractive entry point, but conditions have been anything but normal for Titan.

In addition to the competitive pressures mentioned above, Titan's problems have been exacerbated by an oversupply of used equipment in the agricultural market (agriculture made up 83% of Titan's sales in the current year). Meanwhile, prices for its customers' key crops, corn and soybean, have been weak in 2013. 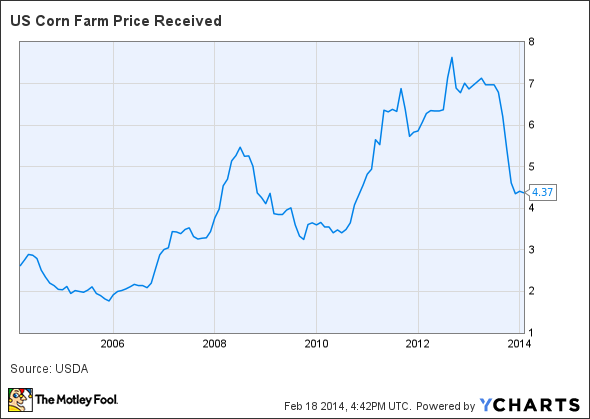 Inevitably, this has encouraged farmers to hold off purchasing expensive new Tier 4 equipment. Indeed, according to Titan CEO David Meyer on the most recent conference call: "[Manufacturers] have been rolling out the Tier 4 technology in your high horsepower tractors and combines, significant price increases. And we're just finding it very difficult to pass, get full price realizations from our customers, considering the size of those price increases."

It's a similar story from CNH's competitor, Deere, with its management recently forecasting an overall net sales decline of 3% in 2014, partly due to entering 2014 " in the face of lower demand for large farm machinery". Furthermore, AGCO gave no respite to the pessimistic trend by forecasting that lower farm income would result in weaker demand from the farming sector.

On a more positive note, Caterpillar is forecasting a 5% increase in its construction industry sales for 2014, and its management's recent commentary has suggested that it won't be subject to the kind of inventory correction issues that it had in 2013. Unfortunately, the same cannot be said about Titan. Even though it increased its construction industry same-store sales by 6.4% in its most recent quarter, management still forecasts that the excess inventory will affect the industry at least through the first half of 2014.

Watch Titan's inventory situation
The key metric for Fools to follow is Titan's inventory situation. When companies have excessive inventory, they can face significant pricing and margin pressures as they try to reduce them by selling off stock. Titan's equipment inventory stood at $1,042 million in the third quarter, compared to a figure of $818 million in last year's third quarter. This is a worrying sign, considering that analysts are forecasting sales to decline 7.5% in the upcoming quarter.

Titan's plan is to reduce equipment inventory by $90 million in the current quarter, and by a further $250 million by the end of its fiscal 2015. 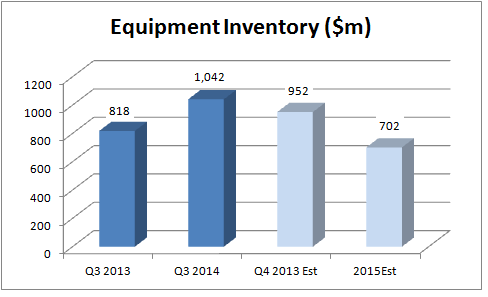 Where next for Titan Machinery?
It's fair to expect a significant amount of volatility about its fourth-quarter results. The market is likely to key on the plan to reduce inventory. Given the current market commentary around the agriculture market, conditions are likely to remain tough in the current quarter. On the other hand, if Titan's inventory correction is ahead of plans then you can expect the stock to be sharply higher. Titan isn't a stock for cautious investors, but then again the market isn't just made for widows and orphans. Just don't expect too much good news, too soon, out of the sector.