The LEGO Movie just finished its third Friday with a commanding lead over two newcomers. Here's what investors and fans can need to know. 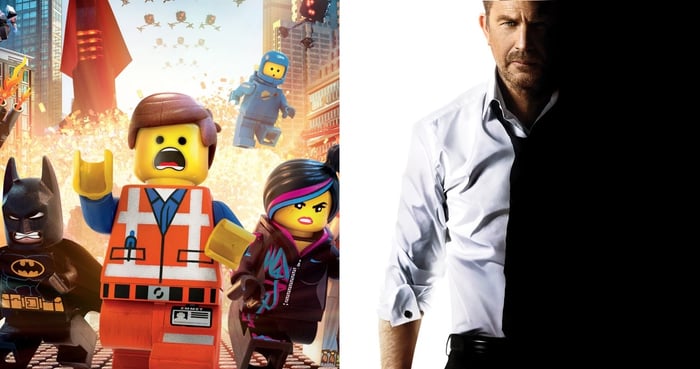 You've got to give it to these toys. Even after three weekends, not even a CIA hit man or city-destroying volcano will be able to oust them from their top spot.

To be fair, The LEGO Movie does have Batman on its side and cost Time Warner's (TWX) Warner Bros. $60 million to produce -- but to pull in $7.34 million on its third Friday is still impressive.

Assuming The LEGO Movie repeats its typically strong late-weekend push, it should end up grossing right around $30 million this weekend, which will bring its domestic gross to date to nearly $182 million. Including international sales, the family-friendly film has enticed audiences to spend more than $210 million.

Meanwhile, it looks like Relativity Media's 3 Days to Kill just won't be able to deliver on its name. Yesterday, the new action thriller took in just $4 million. Keep in mind, however, 3 Days to Kill only required a $28 million production budget. And assuming the same Friday weekend multiple as writer/director Luc Besson's January 2009 effort in Taken, his latest film should approach the $11 million mark over the next two days. For some perspective, that's near the low end of the range Relativity was hoping for.

Much more discouraged, however, were the folks at Constantin Films, whose $100 million historic epic Pompeii also made its domestic debut to a minuscule $3.4 million. To Constantin's credit, the studio is leaving domestic distribution up to Sony's (SONY 1.22%) TriStar subsidiary, and also sold foreign rights to independent distributors.

But while we already knew Pompeii's stateside performance would be dismal, we shouldn't write it off just yet. Director Paul W.S. Anderson's previous films -- notably including the Resident Evil franchise and The Three Musketeers -- have historically garnered the vast majority of their sales overseas. Considering Pompeii debuted in nearly two dozen additional countries yesterday, I'll revisit its collective performance as those delayed international numbers begin to pour in.

Next, Sony Pictures' $100 million reboot of RoboCop secured fourth place in its second Friday with $2.6 million, bringing its worldwide gross so far to a decent $107.1 million. If RoboCop can keep its box office legs under it, that should leave it somewhere in the $8 million to $10 million range come Monday.

Screen Gems' About Last Night and Sony's The Monuments Men weren't far behind, grossing $2.28 million and $2.25 million for fifth and sixth place, respectively. Even without accounting for the positive effects of last weekend's Valentine's Day viewers, that's still slightly lower than I had expected for each film. Including the next two days' results, each should each accumulate around $7 million this weekend.