If the recent deluge of angry comments from BlackBerry (BB -6.92%) loyalists are any indication, T-Mobile US (TMUS -1.17%) appears to have stumbled into a veritable beehive this week.

The thing is, these bees seem to have lost their stingers.

Sticks and stones ...
It all started when T-Mobile sent out a mailer last week, offering subscribers the chance to upgrade to Apple's (AAPL -0.80%) iPhone 5s for $0 down.

That wouldn't have been so bad all by itself, but the mailer specifically labeled it as a "GREAT OFFER for BlackBerry customers."

Worse yet, T-Mobile went further to target BlackBerry's bread-and-butter customer base, suggesting they could "switch to iPhone 5s and get powerful communications and productivity apps -- with the ease of use that Apple is known for."

This doesn't come as a huge surprise, considering T-Mobile decided to stop stocking BlackBerry smartphones in its stores last September. And though you can still order BlackBerry's older Q10 or Z10 on T-Mobile's website, you're out of luck if you want to find the latest Z30 and Q30 models.

What's more, it's not as though BlackBerry has provided outsized incentives for T-Mobile to sell its new phones, anyway. BlackBerry sold only 4.3 million smartphones in Q3, of which nearly 75% were older BlackBerry 7 devices.

Meanwhile, Apple moved 47.8 million iPhones in its most recent quarter, of which around half were Apple's older iPhone 4 models.

"Inappropriate and ill-conceived"
Unsurprisingly, last week's move also drew the ire of BlackBerry CEO John Chen, who responded in a blog post Tuesday to both thank his loyal customers and make it clear his company was "outraged."

Chen went on to call T-Mobile's promotion "inappropriate and ill-conceived," and then closed by addressing the un-carrier directly:

Finally, to T-Mobile, I would like to remind you that our long-standing partnership was once productive and profitable for both BlackBerry and T-Mobile. I hope we can find a way forward that allows us to serve our shared customers once again. Notwithstanding the current challenge, we remain very excited about BlackBerry's future.

The next day, T-Mobile CEO John Legere took to Twitter to offer a tongue-in-cheek olive branch to the struggling smartphone maker: 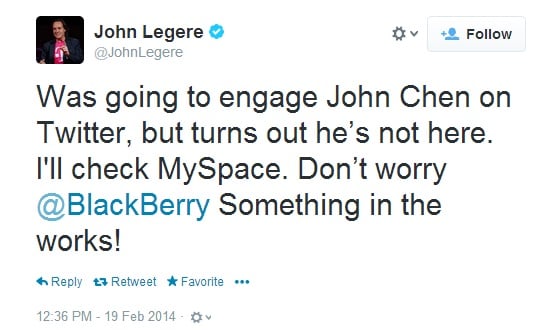 On one hand it seems fair enough; after all, T-Mobile did throw in a little something to appease BlackBerry fans this time. But T-Mobile is still slanting the bulk of its incentives toward other smartphone-makers' devices, and that extra $50 for choosing a nearly year-old smartphone nobody wanted to buy in the first place isn't exactly all that appealing.

Then again, something tells me T-Mobile knew exactly what it was doing when it sent out the initial offer. With little to lose in drawing sharp criticism from not only BlackBerry loyalists -- most of whom were unlikely to make the switch anyway -- but also of the company's new CEO, T-Mobile has effectively created more visibility for its final promotion than it ever would have received otherwise.

If one thing is clear in the end, however, it's that T-Mobile is still turning its back on BlackBerry.