Please ensure Javascript is enabled for purposes of website accessibility
Log In Help Join The Motley Fool
Free Article Join Over 1 Million Premium Members And Get More In-Depth Stock Guidance and Research
By Alex Planes - Feb 23, 2014 at 11:45AM

The world's second-largest payment network has been a great investment over the past few years, but how much more opportunity is left for MasterCard (MA) shareholders?

Investors love stocks that consistently beat the Street without getting ahead of their fundamentals and risking a meltdown. The best stocks offer sustainable market-beating gains, with robust and improving financial metrics that support strong price growth. Does MasterCard Inc. (MA -2.63%) fit the bill? Let's look at what its recent results tell us about its potential for future gains.

What we're looking for
The graphs you're about to see tell MasterCard's story, and we'll be grading the quality of that story in several ways:

What the numbers tell you
Now, let's look at MasterCard's key statistics: 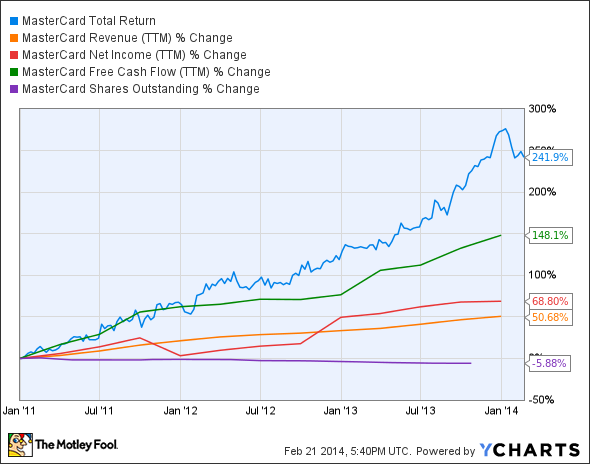 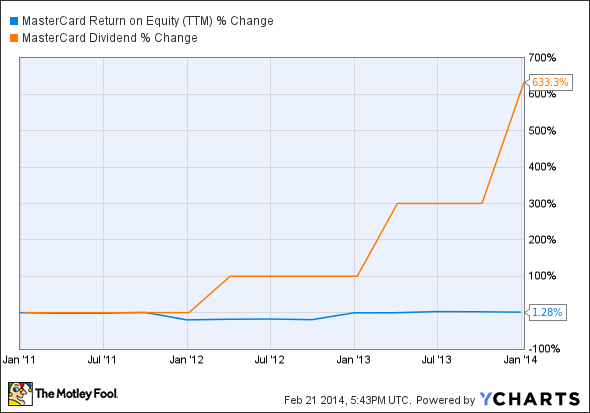 How we got here and where we're going
MasterCard puts together a really strong performance, missing out on a perfect score only because its share price growth has outpaced its EPS gains -- but with so many other factors in its favor as an investment, can you really blame investors for bidding up shares?

Over the past few years, MasterCard has enjoyed significant growth on both top and bottom lines due to increasing purchase volumes around the world. As a result, MasterCard has rewarded shareholders with a big boost in dividend payouts over the same time frame without sacrificing the security of its cash flow. But does that mean MasterCard will keep outperforming in the future? Let's dig a little deeper to find out.

In its latest quarter, MasterCard disappointed on both top and bottom lines despite strong growth in both payment volumes and U.S. dollar exchange rates. Fool contributor Jeremy Bowman notes that MasterCard lost a large number of customers to Visa (V -2.46%) after Visa signed an agreement with JPMorgan Chase to switch MasterCard users to its network, resulting in lower-than-expected transactions processed. Subsequently, FBR Capital issued a rare downgrade for the credit card giant to a mere "Hold."

However, there are still plenty of signs that MasterCard's growth runway has plenty of room left. Fool contributor Philip Saglimbeni notes that MasterCard's full-year earnings guidance for fiscal 2014 outpaces both Visa's and American Express' (AXP -2.68%) revenue and income growth forecasts for the same fiscal periods.

According to the World Bank, global GDP growth will improve to 3.2% in 2014 a notable improvement over last year's anemic 2.4% growth rate, and this higher growth is expected to hold up through 2016. Overall consumer spending in the U.S. rose 3.3% in December on the heels of a 3.2% rise in GDP during the fourth quarter.

Last year, MasterCard made significant improvements to its MasterPass digital platform to maintain a safe and hassle-free payment experience, which could be a viable competitive advantage over Visa -- particularly in light of the latter's possible legal battles with Target and other megaretailers over last holiday season's data breach debacle.

Fool contributor Joseph Gacinga notes that MasterCard and Visa have both been trending north as the Federal Reserve filed an appeal to reinstate a $0.21 debit fee limit. However, American Express could win over smaller American merchants with its OptBlue program, and AmEx also expects to grow its aggregate billings 4.5 times as much as the U.S. economy grows.

There has historically been room for all three payment processors to grow along with the economy, but as Americans now carry less revolving debt than they did before the financial crisis, it appears that the network with the best international presence has the best opportunity to thrive over the long term.