As the global economy gingerly but surely recovers from a multiyear malaise, investments in companies that serve an increasingly emboldened consumer may generate market-beating returns -- with the right selection. Tiger Global Management operates the Tiger Global hedge fund. The fund, which is managed by a team led by Chase Coleman and Feroz Dewan, tends to favor consumer-goods-oriented investments -- especially those facilitated by technology. Tiger Global recently filed its "13F" positions form with the SEC, detailing investments held at the final quarter of 2013. Let's review three positions that illustrate both the fund's consumer-centric approach and its exposure to the purchasing power of diverse economic groups.

Loading up on the travel sector
TripAdvisor
(NASDAQ:TRIP), the member community travel site which also owns several Web travel properties, including Airfarewatchdog.com, SeatGuru.com and BookingBuddy.com, was spun off from Expedia (NASDAQ: EXPE) in December 2011. The company is roughly one-fifth the size of Expedia in revenue terms, posting $944 million of trailing 12 months' revenue as of its most recent quarter, versus $4.8 billion for Expedia. Yet TripAdvisor is growing at a faster rate, and its valuation is even loftier than Expedia's 48 times trailing 12 months' earnings -- TripAdvisor trades at slightly more than 69 times trailing 12 months' earnings. Tiger Global more than quintupled the number of TripAdvisor shares it held last quarter, for a total holding value of $122 million, or roughly 1.3% of the total portfolio.

TripAdvisor serves as a counterpoint to online travel industry leader priceline.com (NASDAQ:BKNG), which is Tiger Global's largest holding, accounting for a shade more than 10% of an $8 billion portfolio. Priceline has posted excellent financial results over the last several quarters, as you can see from the profit margins it enjoys: 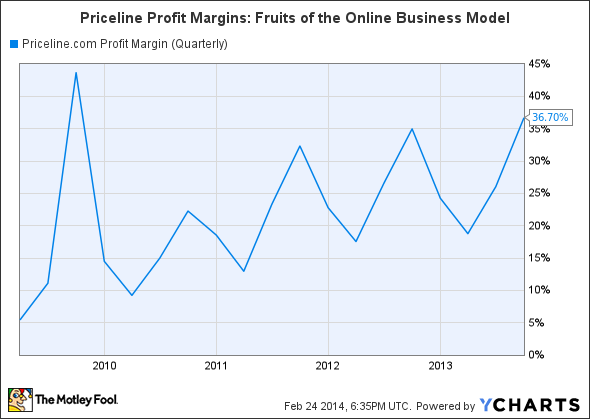 Even though emerging-market economies have seen their potential crimped a bit in 2013 and at the outset of this year, Priceline has benefited from investing in fast-growing travel properties such as the Asian site Agoda.com. While Priceline is likely positioned for continued healthy profit margins, TripAdvisor provides diversification and calculated risk within the fund's online travel theme. TripAdvisor is focused on improving its mobile devices experience. The company is also working to better convert leads by aggregating more of its advertisers' data on its own page, rather than sending customers to partner sites, a platform innovation known as "meta display."

Both TripAdvisor and Priceline should benefit from rising disposable consumer income in the middle part of this decade. They are also emblematic trades in the Tiger Portfolio -- consumer-facing and technology-facilitated.

After going public in the late 1990s only to be taken private again, Restoration Hardware re-entered the public markets via an initial public offering in 2012. The company focuses on high-end furniture and accessories and distinguishes itself from companies such as Pier 1 Imports (NYSE: PIR) and Crate and Barrel by offering a massive selection of products through its catalog and app (the 1,600-item "Source Book"), as well as showrooms with a curatorial bent, appointed to resemble art galleries.

Does the public, only a handful of years removed from the Great Recession, have an appetite for luxury furnishings? While there are limited quarters of data available on Restoration Hardware's latest iteration as a public company, a few markers stand out on the company's financials. Restoration Hardware is enjoying extremely brisk sales: Revenue increased 36% in the first nine months of the company's fiscal 2013 versus the prior year. More intriguing is the growth in RH's balance sheet. Inventory on the company's books increased by nearly 27% over the same nine months. Rather than merely replenishing inventory to meet the increased sales, Restoration Hardware is plowing cash into new inventory. This demonstrates a high level of confidence on the part of management, as well as evidence of strong consumer demand.

On an admittedly anecdotal level, Restoration Hardware's rapid sales growth and investment in inventory also provide some validation of why Tiger Global's consumerist strategy is appropriate at present.

Position building: Dollar General
A final position of interest is the fund's stake in Dollar General (NYSE:DG), which increased by 40% from the previous quarter and now represents Tiger Global's third-largest investment at nearly 6% of the total portfolio. Unlike TripAdvisor and Restoration Hardware, which capture the ready money flowing into the pockets of relatively better-off consumers, Dollar General has flourished by catering to the purchaser who, by choice or necessity, is aggressively economizing.

As the economy moderates, Dollar General continues to find methods to increase sales and profit. Same-store sales have grown at a modest recent rate of 4%-4.5% during the last year, and the company plans to open more than 700 new stores in 2014, against an existing base of 11,000 sites. Dollar General will also continue to remodel existing stores, expanding square footage in some locations and focusing on productivity per square foot in others.

The size of the Dollar General position provides a bit of insurance against some of the fund's more richly valued positions, such as TripAdvisor. Dollar General trades at 18 times trailing 12 months' earnings. Should the economy tank again, DG will see renewed investor interest, as well as the potential for increased revenue. But the company will also be able to participate in a more purposeful U.S. economy through its store expansion plans.

A decent strategy at an opportune moment
Tiger Global's consumer-focused strategy appears to be a solid approach given the current macroeconomic environment. While we don't recommend blindly replicating any hedge fund's holdings, the fund's present portfolio composition points to a compelling investment thesis to watch over the coming quarters in 2014.