The Dow Jones Industrial Average (DJINDICES:^DJI) is having a pretty good day today, as investors seem more convinced than before that recent indications of economic weakness are more the result of bad weather than the beginning of a major downturn. The index is now up more than 1% at 12:20 p.m., with all but five components in positive territory.

One blue-chip stock, however, is running well ahead of the pack -- UnitedHealth Group (NYSE:UNH) is leading all Dow components with a 3.2% gain this morning after news regarding the success of the health insurer's recently introduced online bill payment system. The myClaims Manager system has processed $20 million in payments to more than 50,000 health care providers, and it should help UnitedHealth streamline its operations going forward.

That's good news if you're a UnitedHealth shareholder, and you're probably well aware of the company's efforts to thrive in this new Obamacare-driven world of health care. But how much do you really know about UnitedHealth? Here are a few fascinating facts from this Dow stock's history.

UnitedHealth was founded in 1977 as United Healthcare, a holding company for the acquisition of Charter Med, which was one of the very first "health maintenance organizations," or HMOs, formed (in 1974) after the passage of the Health Maintenance Organization Act in 1973.

UnitedHealth went public on Oct. 18, 1984. If you'd bought $1,000 worth of shares on its first day of trading and reinvested all dividends, you'd have seen your investment grow to be worth more than $500,000 today: 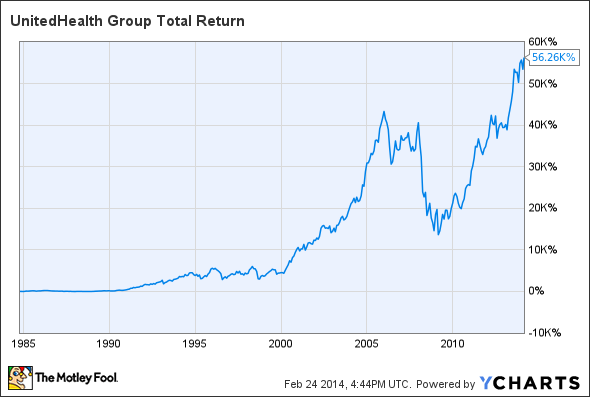 UnitedHealth was the first to create and implement a pharmacy benefits business, which handles prescription drug claims at retail pharmacies. Today, more than 210 million Americans have a pharmacy benefits management, or PBM, program, and UnitedHealth remains one of the largest in the sector with its OptumRx subsidiary. The only larger publicly traded PBMs are Express Scripts (NASDAQ:ESRX) and a subsidiary of CVS Caremark (NYSE:CVS).

By 1991, when UnitedHealth graduated from over-the-counter exchanges and joined the New York Stock Exchange, its shares had already grown by 1,000%: 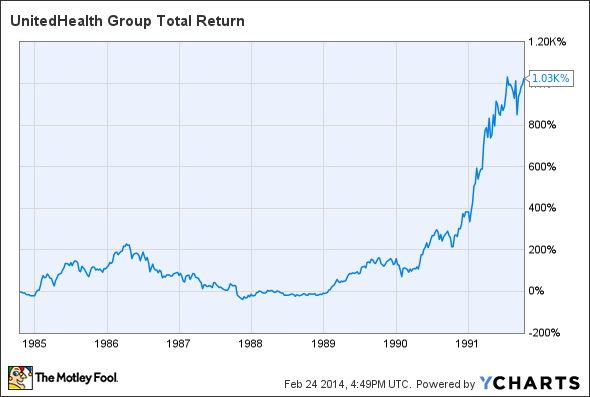 When UnitedHealth joined the Dow in 2012, it became the first health insurer component in the index's century-plus history, and was the third health care stock on the Dow. It is also the second company from the broader insurance industry to join the Dow, although it is presently nearly three times the size of earlier insurer-addition Travelers (NYSE:TRV).

With more than 85 million people on its rolls, UnitedHealth is the largest health insurer in the United States. It also claims policyholders in 125 other countries.

Do you know any more interesting facts and figures about UnitedHealth that you think we should know? Share your knowledge with a comment in the box below.