The recent approval of Johnson (JNJ) and Pharmacyclics (PCYC) Imbruvica for two forms of blood cancer may be just the beginning.

Johnson & Johnson (JNJ -1.07%) and Pharmacyclics (NASDAQ: PCYC) are on a winning streak, and if it's any indication, investors are likely to see more good news coming.

The wins are coming courtesy of the cancer drug ibrutinib, a compound that's already won approval from the FDA as a treatment for both mantle cell leukemia and chronic lymphocytic leukemia. Those approvals have helped lift shares in both companies, but the news has been particularly rewarding for Pharmacyclics (NASDAQ: PCYC) investors given its shares have more than doubled in the past year. 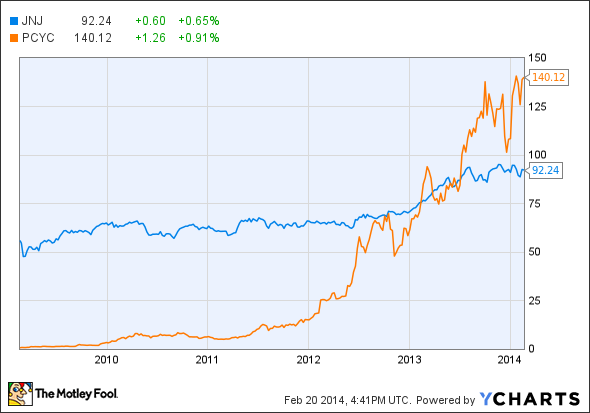 A powerhouse in the making?
The excitement surrounding ibrutinib (its brand name is Imbruvica) isn't misplaced. The drug works by reducing the activity of a key receptor associated with B-cell cancer. While the approval as a second line treatment in MCL isn't likely to move the sales needle -- it's a fairly uncommon disease -- the CLL approval could serve as revenue launch pad.

Sadly, CLL is a fast growing disease. In fact, the growth in annual incidence for the disease places it among one of the quickest growing forms of cancer. While less than 3,000 are diagnosed with MCL annually, more than 15,000 people will be diagnosed with CLL in the U.S. and 4,500 will die from the disease this year, according to the National Cancer Institute.

Convincing doctors to prescribe and payers to approve Imbruvica as a first line drug for CLL may be tougher than for MCL given MCL's prognosis is worse. That's because Imbruvica is a costly medicine. MCL patients will pay roughly $130,000 per year, and CLL patients, who will take one less pill a day, will be on the hook for just shy of $100,000 a year.

However, Pharmacyclics (NASDAQ: PCYC) has an opportunity to earn even more from Johnson (JNJ -1.07%) going forward. There's still $440 million ($550 million excluding payments in Q4) in potential development, filing, and approval milestones up for grabs, according to the company's third quarter filing with the SEC.

$425 million of those potential payments are tied to development and regulatory progress, and the remaining $290 million is attached to regulatory approvals.

In addition to those milestones, Pharmacyclics (NASDAQ: PCYC) also negotiated for Johnson (JNJ -1.07%) to pay for 60% of the cost to develop Imbruvica. Pharmacyclics (NASDAQ: PCYC) will lead sales efforts in the U.S., and Johnson (JNJ -1.07%) will be responsible for commercialization overseas; profits will be split down the middle between the two.

As a result of the approvals and potential new indications, industry excitement for Imbruvica has accelerated, with some analysts projecting the drug could reach peak annual sales of $6 billion. If that heady forecast proves correct, Imbruvica will become one of the world's top selling cancer drugs, which will go a long way in justifying Pharmacyclics' (NASDAQ: PCYC) $11 billion market cap.

Todd Campbell has no position in any stocks mentioned. Todd owns E.B. Capital Markets, LLC.  E.B. Capital's clients may or may not have positions in the companies mentioned. Todd also owns Gundalow Advisor's, LLC. Gundalow's clients do not have positions in the companies mentioned. The Motley Fool recommends Gilead Sciences and Johnson & Johnson. The Motley Fool owns shares of Johnson & Johnson. Try any of our Foolish newsletter services free for 30 days. We Fools may not all hold the same opinions, but we all believe that considering a diverse range of insights makes us better investors. The Motley Fool has a disclosure policy.