Software companies that are shifting their offerings into the cloud are outperforming the markets, and investors should look closely at the theme.

There are no prizes for guessing that cloud computing is the IT sector's hot buzzword is right now. Blue chip tech companies like Google, IBM, Oracle (ORCL -0.83%) and Microsoft are all investing in offering infrastructure as a service, or IaaS, solutions to their customers. In addition, there is an ongoing trend of incumbent software companies shifting toward software as a service, or SaaS, based models. For example, Intuit (INTU -2.89%), Adobe (ADBE -3.18%), and Autodesk (ADSK -2.74%) are all making the change, but what is in it for them? Moreover, what are the tangible benefits of cloud computing for these companies?

Intuit leads the way
All the companies focused on have two objectives in common:

Intuit is best known for TurboTax and its accounting software Quickbooks. However, the company also offers payroll, payments, and marketing tools to small businesses, with which it has the opportunity to cross-sell these products to its customers in the cloud. Simply put, customers using SaaS have far more interaction with the software provider than they do by using traditional on-license, on-premise software. Investing Fools can see the result of this with Intuit's attach rates (customers who add on other services) with its QuickBooks online service. Quoting from the recent Intuit conference call:

[W]hen you look at the attach rates, the people who are actually attaching our merchant services, our Payments business, that's up 50% versus the old QuickBooks Online. And the Payroll number is actually up a little over 5%.

So, Intuit is able to increase the LTV of a customer by shifting them into the cloud, and then selling them add-on solutions like payments and payroll. In fact, the company estimates that the LTV of QuickBooks online is 40% higher than with the desktop version. In addition, Intuit is also shifting its existing QuickBooks online customers onto its new QuickBooks online service, and with only 12% of them having made the move, there should be plenty of runway in future.

Intuit recently reaffirmed its full year guidance of 10%-12% growth in its small business group, with revenue expected to grow at 6%-8% and non-GAAP operating income at 7%-10%. Moreover, its attempts to simplify its TurboTax offering appear to be bearing fruit, because it reported 7% growth in TurboTax units to mid-February versus the IRS estimate of 6.6% growth in the same period.

Adobe & Autodesk generating growth in the cloud
Digital media and marketing company Adobe made the transition to selling SaaS solutions after it struggled to generate revenue growth with its core digital publishing software. In essence, it shifted from selling software on a permanent license basis toward selling subscription based SaaS solutions. It's been so successful in selling its digital publish subscriptions (which it calls "Creative Cloud") that at the end of its last fiscal year in November it reached 1.4 million subscriptions, significantly ahead of its initial target of 1.25 million.

Paradoxically, the shift to SaaS is having a negative short-term effect on revenue, because it involves replacing a large upfront fee (permanent license) for a subscription pricing. However, its subscription based customers are estimated to generate a higher LTV due to increased retention rates and long-term revenue streams. A look at historic and estimated revenues demonstrates how the cloud is transforming Adobe's business, and how this unusual dynamic is playing out. 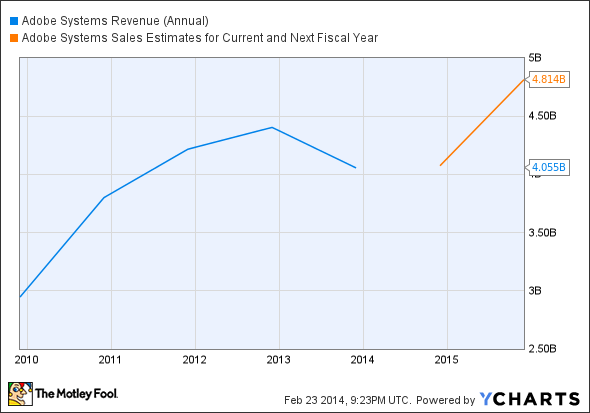 Clearly, Autodesk has been monitoring how well Adobe is doing because it too is now offering its SaaS solutions on a rental basis. Previously, Autodesk was focused on merely switching its stand-alone flagship products into SaaS based suites which include a bundle of products. However, ever since the decision (announced in August) to make its solutions available on a rental basis too, the market has priced the stock much higher. In fact, a quick look at a share price graph demonstrates how well moving to the cloud has worked out for Intuit, Adobe, and Autodesk. 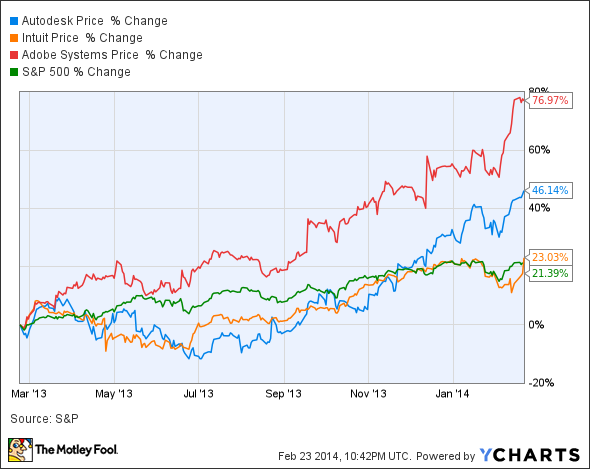 What about Oracle?
Oracle is interesting, because it's being challenged by pure cloud play companies like Workday and salesforce.com. However, the company remains hugely cash generative and CEO Larry Ellison has made it clear that Oracle intends to aggressively move into the cloud. Indeed, its investment in being price competitive with its IaaS offerings is intended to help it sell its cloud based applications to the same customers.  The market has long fretted over increasing competition for Oracle, and the potential for future margin erosion, but perhaps it's time to focus on how it can also increase the LTV of its customers by migrating to SaaS based solutions?

The bottom line
Cloud computing is transforming the operational performance of companies like Intuit, Adobe, and Autodesk. It may also do so for Oracle in future. The evidence is that the early adopters of the cloud are able to increase the LTV of their customers, while also increasing the cross-selling opportunities for their products. It's more than just a buzzword, and the benefits are tangible.