E.J. Manuel is the latest athlete to present himself as an investible asset.

Arian Foster, Vernon Davis, and now E.J. Manuel. Fantex, the brokerage that lets investors trade stock in professional athletes, is slowly accumulating NFL players. This week, the company announced it has reached an agreement with Manuel, who plays quarterback for the Buffalo Bills. Should you buy in?

The brand value
An investment in a Fantex athlete is really an investment in his or her brand value. Comprised of on-field (contract) and off-field income (endorsements), both sides of the equation are important.

In Manuel's case, the second-year player is in the midst of a four-year, $8.88 million contract with Buffalo. This includes a fully guaranteed $4.8 million signing bonus, according to Spotrac.

Unlike some first-round picks of years past, Manuel's deal is significantly depressed by the NFL's rookie wage scale, which was established in 2011. Josh Freeman, for example, signed a five-year deal as a first-round rookie in 2009 that paid him an annual salary 300% higher than Manuel. Freeman was picked 17th that year, while Manuel went one pick higher in the 2013 draft.

The wage scale lowers rookie contracts, which gives those investing in younger NFL players an opportunity. As I wrote in my analysis of Richard Sherman, "Until there's a proven market for athletes, there's no way to know just how much more investors will prefer younger players, but their Price-to-Brand Value ratios -- let's call it P/BV -- should be higher than their older peers."

Assuming brand value determines the value of a player's Fantex stock, the younger the better. There's more upside, because he has more time to improve his brand value, whether that's through a richer contract or more endorsements.

While Manuel has at least a few endorsement deals at the moment, including one with memorabilia company Panini America, there's still plenty of upside.

In a recent discussion with Buck French, John Rodin, and Sean Baenen -- respectively, the CEO, president, and CMO of Fantex -- the executives stressed that while their company cannot control how well an athlete plays on the field, Fantex does help with sponsorship connections, which ultimately can lead to more endorsement deals. In fact, a major reason athletes choose to sign with Fantex is its marketing expertise, according to French.

I've broken down the numbers below (the scenario table follows). 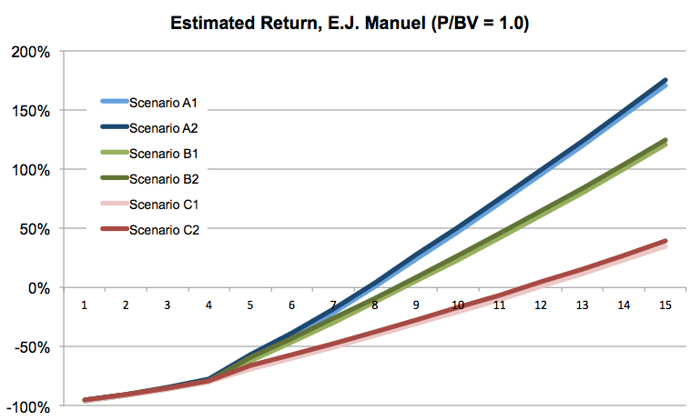 Contract data from Spotrac. Estimates and graphs compiled by author. Assumes rookie signing bonus is spread evenly among first four years, and uses an inflation rate of 2.5% to estimate contract value. Horizontal axis in years, in terms of Manuel's career.

The simple take is that the better Manuel's contract, the better investors' return will theoretically be. Likewise, the more he makes from endorsements, the more you'll make from his Fantex tracking stock.

As I wrote a few weeks ago, Fantex plans on paying dividends, assuming a player's checks are coming in. The company told me it reserves the right not to, but its goal is to, "pay out a minimum of 20% or greater of available funds as dividends."

Scenario A
This was my best-case scenario. If Manuel can sign a contract equal to the annual average of the NFL's top 50 QBs ($6.9 million) when he becomes a free agent in 2017, the value of Fantex's investment will break even in his eighth year, his age-30 season. This is illustrated above, and assumes his endorsements are excellent at $2 million a year. As is also shown, there's a bit more upside if Fantex pays a dividend rate of 40% instead of 20%.

Scenario B
In this scenario, Manuel's contract is still assumed to be the average of the NFL's top 50 QBs, but his endorsements are estimated to be much lower at $300,000 per season. The upside shrinks, but because on-field income would remain high, the investment breaks even in the ninth year. Again, notice the slight difference depending on the dividend rate.

Scenario C
Lastly, Scenario C is what investors can expect if Manuel signs a long-term contract equal to the total NFL QB average ($3.8 million), which includes all backups. In addition to a cheaper deal, this scenario also assumes Manuel can't improve his endorsement value significantly over time.

The X-factor
There is an X-factor here, though. Do you recall the Price-to-Brand Value ratio I mentioned above? If -- and this is a big if -- investors value players at a multiple of their underlying brand value, there's more upside potential. Here's what Manuel's valuation does if his stock trades at a P/BV of 2.0 instead of 1.0. 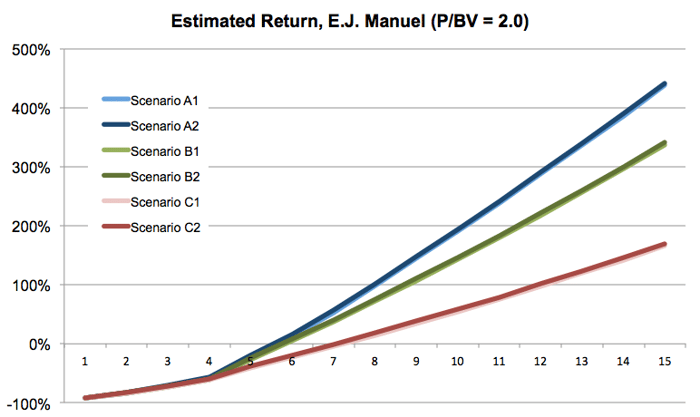 Contract data from Spotrac. Estimates and graphs compiled by author. Assumes rookie signing bonus is spread evenly among first four years, and uses an inflation rate of 2.5% to estimate contract value. Horizontal axis in years, in terms of Manuel's career.

If this were to happen, the break-even point occurs much sooner, and the estimated return (in Scenario A) nears 200% in Manuel's tenth year, his age-32 season. In this scenario, a career through at least the age of 30 would theoretically double any investment in Manuel's Fantex stock. Again, a lower contract or fewer endorsements decreases the upside, and the dividend rate will affect the return.

Remember, because Manuel is a very young player, he theoretically deserves a higher P/BV ratio than an older veteran, like Vernon Davis. If investors believe he warrants a P/BV of 3.0 or 4.0, the estimated return increases even further.

The future
At the end of the day, I'm bullish on E.J. Manuel, much more so than someone like Davis. Manuel has youth on his side, and according to The Buffalo News, Bills head coach Doug Marrone says the team is "excited about" Manuel's development, adding, "when he was in there, with the lack of time that we had, there were things that he did very well."

Manuel missed six games as a rookie, and it's possible that with more practice time and mentorship, he could become a dual-threat QB in the same class as Colin Kaepernick and Robert Griffin III. The Daunte Culpepper comparisons -- due to his size, arm, and ability to throw on the move -- are also justified from the game film I've seen.

Manuel's college success and draft positioning warrant at least a couple more years of development time, and with the Bills, that likely means it will be as a starter. While the risks of injury and ineffectiveness remain, I like the value present in E.J. Manuel's eventual IPO.

Keep the Barry Sanders Clause (it might exist in the future) in mind: Any athlete's past performance is no guarantee of future results, so invest at your own risk.