Please ensure Javascript is enabled for purposes of website accessibility
Log In Help Join The Motley Fool
Free Article Join Over 1 Million Premium Members And Get More In-Depth Stock Guidance and Research
By David Phillips – Feb 25, 2014 at 11:13AM

The share price of Zogenix has soared more than 260% during the past year, driven by investor optimism for new opioid painkiller Zyhydro ER. Will the drug be a commercial success?

Zogenix (ZGNX) has soared more than 260% during the past year, driven higher by the possibility that the drugmaker's new opioid painkiller Zohydro ER could reach $300 million in annual sales. Unfortunately, the availability of multiple branded and generic options, combined with potentially hostile reimbursement and regulatory climates, could constrain Zohydro's commercial success.

Opioids – synthetic versions of opium – work by affecting the intensity of how the brain perceives pain. Drugmakers have developed many opioid derivatives in the last 30 years after discovering that even subtle differences in opioid isomers can cause material changes in agonist/antagonist opioid- receptor signaling, which yields differing analgesic and side-effect profiles (including psycho-stimulant abuse potential) for each user, depending on the influence of still-unknown genotyping.

Undaunted, chief executive officer Roger Hawley judiciously opines that Zohydro ER has the potential to fulfill an unmet clinical need: similar efficacy to a combination-entity hydrocone that contains the analgesic acetaminophen or ibuprofen, such as AbbVie's Vicoden or Vicoprofen – but without the risk of liver toxicity .

Whether inadvertent or purposely, overdose from prescription combination drugs containing acetaminophen accounts for more than 60% of all cases of acetaminophen-related liver failure in the United States; carries a 30% mortality rate; and is the largest cause of death in the entire US Acute Liver Failure Study Group registry (2008). The ALF is a multi-center network that was first established in 1997 to gather data prospectively on all forms of acute liver failure.

As the first extended-release formulation hydrocodone therapy to gain FDA approval that doesn't contain acetaminophen, CEO Hawley contended at a JPMorgan-sponsored health care conference last month that Zohydro ER has a real shot at capturing the prescription (Rx) needs of some of the 47 million pain patients who currently take an immediate-release hydrocodone/acetaminophen (HC/APAP) formulation.

Market research from analytics firm IMS Health, estimates that about 5% of these patients are using immediate release HC/APAP products for the treatment of chronic pain.

Zohydro ER Looks to Fill a Clinical Need for Chronic Pain Patients
When Zohydro ER is launched later next month, management believes that the best opportunities for successful commercialization and rapid adoption will be to target the company's sales message of "diminished potential for liver toxicity" to key opinion leaders and high opioid prescribers.

Additionally, the company plans to detail the utility of Zohydro ER as an attractive treatment option for patients rotating from another extended-release opioid, due to loss of effectiveness or side-effects.

At the JPMorgan conference, management forecasted that a 1% market penetration (equaling 1.27 million total Rxs) could lead to $300 million in annual sales: 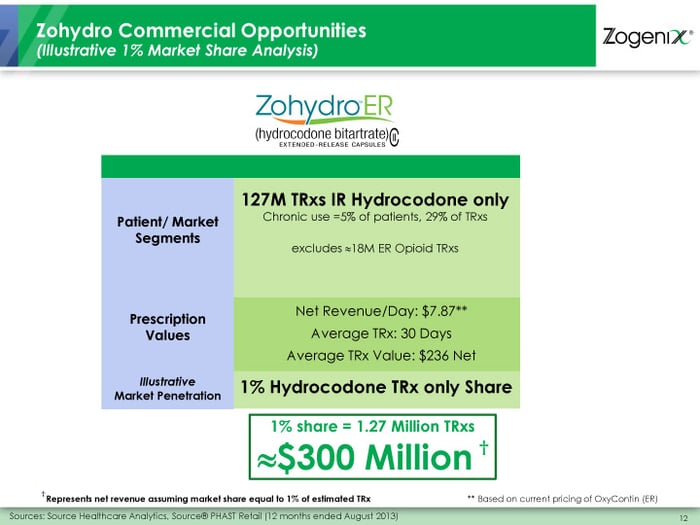 On February 24, Zogenix's stock price rallied almost 5% on word that the for-profit MCO Humana would reimburse prescription coverage of Zohydro. However, member coverage determination could be a challenge. Specifically, prior authorization will be requested of the prescriber and the drug will only be covered after the "member has a trial, intolerance, or contraindication to at least two long-acting opioid products, one of which must be extended-release morphine."

A cautionary tale
Pfizer's Oxecta offers a cautionary tale, too: how prescribers can punish a product touted as AD – when, in practice, it's not. Approved in 2011, peak sales forecasts, on average, for Oxecta were estimated at $100 million. Crushing the tablet and inhaling it hasn't discouraged abuse. Quarterly sales last year averaged less than $100,000.

Whether Zogenix can successfully launch Zohydro ER with a sales force of just 155 is subject to debate, too. Mallinckrodt launched Exalgo in April 2010 with a dedicated sales team of 275 reps. Three years into launch, trailing 12-month sales for this hydromorphone (only) derivative totaled just $155 million.

This Fool also has to ask: Given just $72 million on its balance sheet and trailing negative free cash flow of $44 million, won't it be difficult for the company to simultaneously launch Zohydro ER and fulfill existing R&D obligations too?

David Phillips has no position in any stocks mentioned. The Motley Fool owns shares of JPMorgan Chase. We Fools may not all hold the same opinions, but we all believe that considering a diverse range of insights makes us better investors. The Motley Fool has a disclosure policy.