After an awful winter, there could be a lot of built-up demand for homes waiting to pounce!

There's no getting around it: It's been a brutal winter in many parts of the country. And much of the negative economic data we've seen recently has been driven by the unusually harsh weather.

This is especially true in housing, where new mortgages have declined and housing starts have fallen considerably.  However, I think there may be a very positive spring on the horizon for real estate as built-up demand and favorable buying conditions create a "perfect storm" (pun intended) of real estate activity.

Housing starts
At first glance, the recent housing-start data looks atrocious, dropping by 16% from December to January. The rate of housing starts is lower than a year ago, even though the market improved throughout 2013.

Even the number of new housing permits -- a good indicator of the building activity to come over the next couple of months -- dropped. January's rate of housing permits was 5.4% lower than it was in December, which indicates that February's housing starts data might be even worse.

This makes sense, and I wouldn't be surprised if the actual number comes in much worse than even the lowest estimates. February's weather has been terrible, and of the permits that were initiated, weather delays may have prevented the actual construction from commencing.

On the other hand, once the weather gets nicer, homebuilders may have a backlog of new homes to build that they haven't been able to start. Along with that, they could see more buyers coming into the market simply because better weather makes it more enjoyable to go out and shop for a house. After all, who wants to shop for a house in a foot of snow?

Mortgages are lower despite decent interest rates
Although interest rates on mortgages are higher than they were last year, they definitely seem to have stabilized as a result of the Federal Reserve's long-awaited taper at the end of 2013.

One interesting observation here is that the rate of mortgage applications fell at a slower rate than housing starts, which could indicate that there are more homebuyers out there than the housing starts data is suggesting.

A word about rates
Although rates are around 1% higher than they were last year, they are still relatively low on a historic basis.  Check out this chart of 30-year mortgage rates over the past decade: 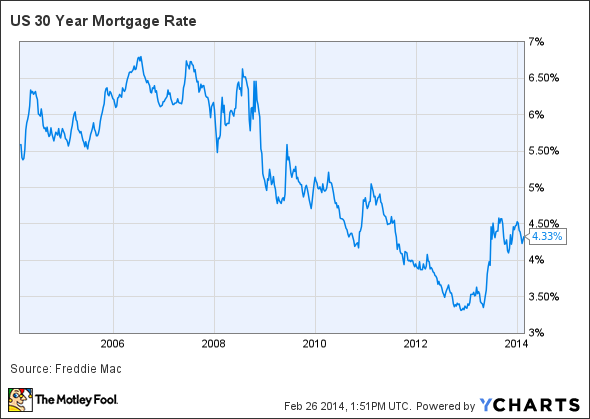 So, aside from the period between mid-2012 and mid-2013, rates in the 4.5% range are about as low as they get. Even after the financial crisis, rates of around 5% were the norm, and were seen as being great bargains at the time for those who could still qualify for and afford a new mortgage.

So, what does it all mean?
This combination of pent-up demand for housing and stable, low interest rates could create a huge spike in all of the housing data. In many parts of the country, home prices still have not fully recovered to their pre-crisis levels and buyers are going to begin to realize that there are still a lot of great bargains to be had.

Once winter begins to thaw, this spring could be a very warm one for U.S. real estate.