New single-family home sales soared 9.6% to a seasonally adjusted annual rate of 468,000 for January, according to a Commerce Department report (link opens a PDF) released today.

After slumping down to a revised rate of just 427,000 in December, this month's reading is the best since July 2008. Analysts were very pleasantly surprised by the report, having expected another down month to a 400,000 annual sales rate. 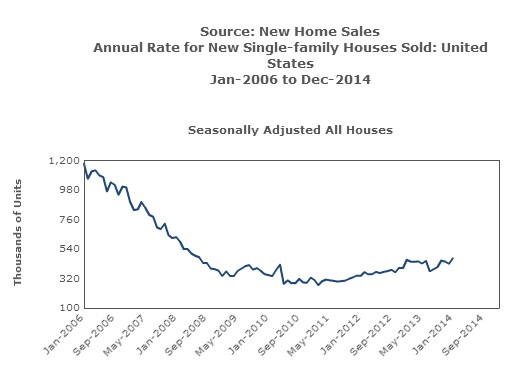 On a regional level, the Northeast region saw sales skyrocket 74% after a tough December. The West and South each added on around 10%, while new home sales in the Midwest fell 17%. In the past 12 months, national sales of new homes have risen 2.2%.

At the current rate of sales, there is an estimated 4.7 months of supply, the lowest level since last June. Despite booming sales and tighter supply, the median sales price fell $5,800 to $260,100, although average prices increased $14,000 for the same period.

This latest report follows on the heels of a National Association of Realtors report, which pointed to a 5.1% decline for existing home sales in January.