In a humbling move, Nokia (NYSE:NOK) recently announced its first ever lineup of Google (NASDAQ:GOOGL) Android phones, known as the X series.

It's also a surprising move, considering that Nokia has intentionally avoided Android every step of the way -- former CEO Olli-Pekka Kallasvuo stubbornly stuck with Symbian, and his successor Stephen Elop struck a deal with Microsoft (NASDAQ:MSFT) to produce Windows Phones instead of Android ones.

Last September, Microsoft acquired Nokia's handset unit -- which produces more than 90% of the Windows Phones in the world -- for $7.2 billion. At the time, many industry watchers believed that the acquisition was aimed at blocking Nokia's production of an Android phone, which makes Nokia's recent decision to produce one even more puzzling.

The X series will be positioned between its entry-level Asha, which is popular in developing nations like India, and its higher-end Lumia series -- a strategy that Nokia hopes will defend its lower-end market against Android devices.

In my opinion, Nokia's X experiment is built on some very shaky assumptions about the market. Here are the three huge problems that I feel Nokia overlooked.

1. Forking Android only works when there's exclusive content
The most well-known example of "forked" Android can be found on Amazon's (NASDAQ:AMZN) Kindle Fire tablets. This means that although the Kindle Fire runs on Android, Amazon replaced the Google Play Store with its own digital storefront and removed all Google-related apps.

Google Play apps (which have an .apk extension) can still be downloaded from the Internet or another Android device, then subsequently loaded into the Kindle's internal memory and installed in a process known as "side loading." However, sideloading apps into a forked Android system is cumbersome compared to the single-touch installation that can be performed on regular Android devices with unrestricted Google Play access.

Amazon, however, already had a built-in user base of customers who purchased previous black-and-white Kindles as a e-readers. With its first-generation Kindle Fire, released in November 2011, Amazon added streaming video content as well. Amazon's massive library of e-books and video content offset its initial lack of forked Android apps.

Today, Kindle Fire tablets still control a 7.6% market share in tablets globally with 5.8 million units shipped last quarter, according to IDC. While 7.6% doesn't seem significant compared to Apple's 33.8% market share, it's big enough to convince developers to release apps for Amazon's App Store. It's also easy to port Android apps over to Kindle Fire devices, since they run on the same OS.

In other words, customers forgave Amazon for forking Android on the Kindle Fire for three main reasons -- Amazon offered plenty of exclusive digital content, black-and-white Kindle users didn't care too much about missing apps on the Fire, and it was cheap, with an average price of $130 to $160 (7" versions).

By comparison, Microsoft has a robust library of over 190,000 Windows Phone apps, compared to the 120,000-140,000 for the Kindle, but those apps won't carry over to Nokia X's forked Android store. Microsoft and Nokia also don't have any exclusive media content that justifies forking the system as Amazon did.

Nokia X customers aren't going to be as understanding as Kindle users -- all they'll get is a crippled version of Android, access to far fewer apps than one with Google Play access, dressed up in package that cosmetically resembles a Windows Phone.

2. You're not fooling anyone, Nokia...
That leads us to the second problem -- Nokia and Microsoft's misguided belief that dressing up an Android phone to look like a Windows Phone will boost sales of its Windows Phone devices.

Today, customers who tend to switch smartphones annually tend to read about their purchases, and are well-informed regarding the differences between iOS, Android, and Windows Phone devices. They know that Android devices made by Samsung, HTC, and Sony (NYSE: SNE) offer enhanced GUIs (graphical user interfaces), but they are connected to the same shared Google Play universe of over 1 million apps. Apple users know that they can access the same App Store from their iPhones and iPads, although certain apps are specifically designed for tablets.

This is the market that Nokia's X, with its Windows Phone GUI covering up a forked Android machine, is diving head first into. It's a silly, half-hearted effort that will likely remind Android users of various homebrew ROMs such as CyanogenMod, which already allow users to dress up their Android phones to look like Windows Phones or iPhones: 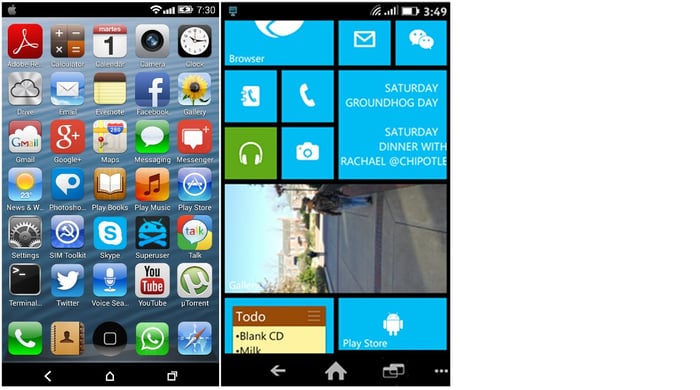 Look familiar? Android phones can already be modified to look like an iPhone (L) and a Windows Phone (R). (Source: Technorms.com)

3. Handing market share to Google on a silver platter
In my opinion, Nokia's strategy will accomplish the opposite of what it intended and actually help boost Android's market share instead. When a customer buys a Nokia X phone, two things will likely happen:

Both outcomes boost Google's market share at the expense of Windows Phone devices.

Nokia can possibly avoid this fate by growing its app store to match Google and Apple's offerings, but it will still be tough to consider the Nokia X as much more than free advertising for Android devices.

The bottom line
In conclusion, Microsoft's lack of exclusive content and the clumsy forked Android approach could doom the Nokia X series. On the other hand, it could experience success in markets like India, where the Asha's streamlined new GUI for Symbian helped Nokia claim 14.7% of the country's mobile phone market.

What do you think, dear readers? Is Nokia X a revolutionary step forward for the company, or will it ultimately embarrass the company? Let me know your thoughts in the comments section below!