Please ensure Javascript is enabled for purposes of website accessibility
Log In Help Join The Motley Fool
Free Article Join Over 1 Million Premium Members And Get More In-Depth Stock Guidance and Research
By Dave Koppenheffer - Feb 26, 2014 at 7:00AM

The numbers are in on which banks closed the most branches in 2013. Should investors run, or is now the time to buy?

In 2011, boston.com published an article suggesting, "For the first time in 15 years, banks across the United States are closing branches faster than they are opening them."

Here we are four years later and banks are continuing to trim back locations at a remarkable rate. In fact, SNL Financial suggested, "Banks collectively reduced the U.S. branch total by 1,487 locations in 2013." 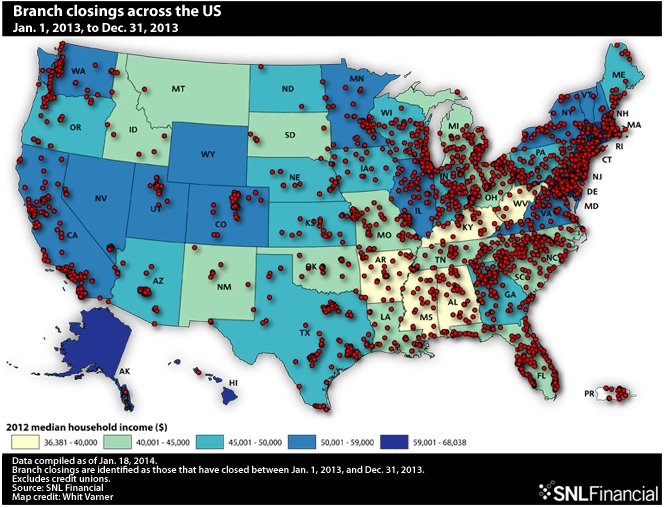 PNC CEO William Demchak noted the company improved its efficiency ratio to 61% from 68% last year. While this is a significant improvement, Demchak explained, "[O]ur expenses are higher than they should be and we're focused on doing something about it."

Bank of America's CEO Brian Moynihan is also doing something, and that's observing customer behavior. According to Moynihan, over-the-counter transactions are down, while ATM, online, and mobile have been rising.

It's clear the industry is changing, and more customers are banking online. This should give investors confidence that scaling back branches won't hurt bank's long-term future.

Cost-cutting and profitably, however, are also at the core of reducing branch count. This is because of the four banks with the most closures in 2013, not one has positive revenue growth since 2010. 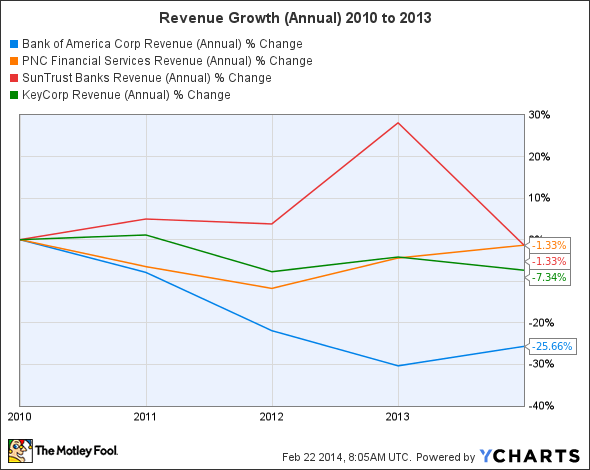 Banks adding branches
According to SNL Financial, JPMorgan Chase (JPM 1.07%) and Huntington Bancshares (HBAN -0.87%) have been able to buck the tide of higher compliance costs and a slow loan growth, raising total branch count by 34 and 8, respectively.

Among the banks that increased branch count in 2013, JPMorgan is the outlier. According to CFO, Marianne Lake, there were a few holes to fill in California and Florida, but the bank suggested it's now satisfied with its current footprint.

Huntington Bank, on the other hand, looks primed to continue growth. It's a very strong regional bank with top-rated customer service, and one of the best at cross-selling customers. Moreover, Huntington Bank, along with US Bancorp and BankUnited, was able to grow revenue since 2010 -- despite significant headwinds. 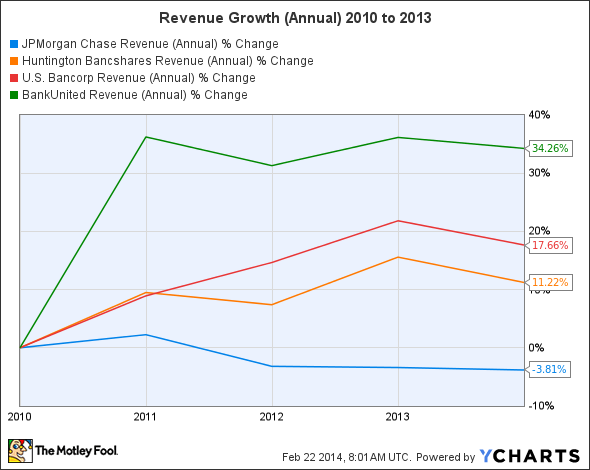 Should investors be worried about bank closures?
A number of the healthiest banks are decreasing branch counts. With that said, there are signs investors shouldn't be too worried. One, in particular, is deposit growth.

According to Moynihan, "Deposit levels continue to reach records each quarter." PNC, similarly, grew deposits by 4% year over year.  This is a great sign that customers aren't running for the hills due to decreasing branch counts. The industry's push toward greater efficiency should, ultimately, allow banks to be in the best position to prosper as the economy continues to strengthen.

Which banks are the best buys?
Looking at the market as a whole, I believe some of the best values lie in the financial sector. While some banks are adding branches and others are trimming back, I see value across the board.

In particular, I like Huntington Bancshares customer-centric approach and growth potential. And on the other side, Bank of America is trading at a favorable valuation, has a very strong market position, and an industry-leading wealth management segment.