Investors can expect a positive start to the stock market today, as the Dow Jones Industrial Average (DJINDICES:^DJI) has gained a modest 22 points in pre-market trading. After dipping to start the year, the Dow has now climbed to within 3% of the record it set on Dec. 31, while the broader S&P 500 could stroll into record territory today if it manages just a 0.2% gain.

Investors will get a fresh reading on the housing market at 10 a.m EST, as the government releases its monthly measure of new home sales. Economist expect the report to show a slight dip in the pace of sales to 400,000 units in January. 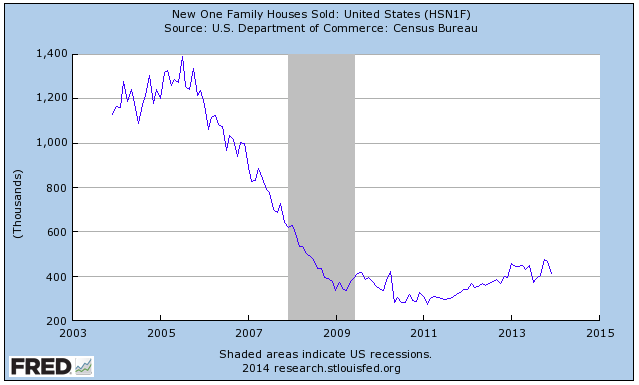 Meanwhile, news is breaking on several stocks this morning that could see heavy trading in today's session, including Lowe's (NYSE:LOW), Target (NYSE:TGT), and SodaStream (NASDAQ:SODA).

Lowe's this morning posted strong fourth-quarter earnings results and announced a new $5 billion share repurchase plan. The home improvement retailer's sales jumped by 6% to $11.7 billion, while earnings climbed by 11% to $0.29 a share. Both figures were on par with analysts' estimates. Lowe's also gave a forecast for 2014 that calls for another solid year: sales are expected to grow by 5%, about even with last year's 5.7% gain. The stock is up 3.7% in pre-market trading.

Target today booked fourth-quarter earnings of $0.81 a share, slightly ahead of the $0.79 that Wall Street expected. At $21.5 billion, revenue was equal to estimates and down roughly 4% from the year-ago period. Target performed better than expected in a few areas, including the Canadian market, which hurt profits less than anticipated in the quarter. Still, the data breach the big-box retailer suffered in December pushed sales comparable-store sales down by 2.5% in the U.S. Target's stock is up 1.3% in pre-market trading.

Finally, SodaStream today announced a 26% bounce in quarterly revenue to $168 million. However, profit fell to $0.03 a share from the $0.36 mark it hit in the year-ago period. As expected, the company saw profit hurt by holiday markdowns on its home beverage-carbonation machines. Still, SodaStream logged a 25% rise in carbon dioxide canister sales and a 32% increase in flavor sales, suggesting that usage trends remain strong. The company forecast a 15% rise in sales this year, even with Wall Street's expectations. The stock is down 1.9% in pre-market trading.