According to Polk, the average age of vehicles on U.S. roads is at a record high of 11.4 years as recession-scarred consumers remain in cutback mode. This is corroborated by a NPD survey that highlights that 75% of the surveyed population will still be running their old cars, kicking the average age still higher in 2014 . Only 14% said that they either planned or will plan to buy a new vehicle and the rest would settle for a used car in 2014.

O'Reilly's superiority
O'Reilly's revenue growth over the past five years leads the pack by quite a distance as shown in the chart. In its fourth quarter of fiscal 2013, O'Reilly reported industry leading comparable-store sales growth of 5 .4% on top of 4.2% growth in the same quarter last year. In sharp contrast, Advance Auto and AutoZone reported minuscule 0.1% and 0.9 % comps growth, respectively, in their previous quarters. 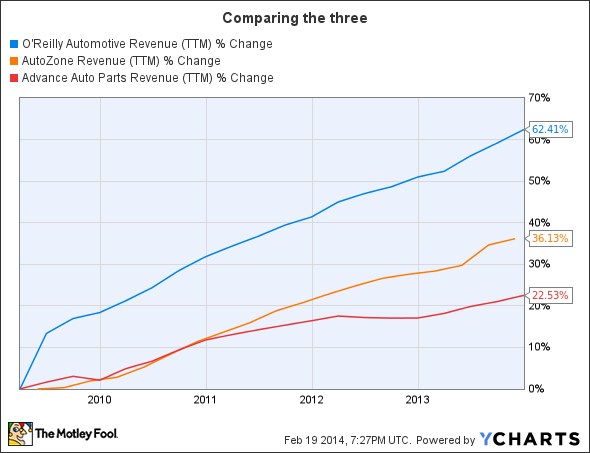 Driven by comps growth and 190 new openings during the fiscal year, O'Reilly's annual revenue grew 7.1% year over year. On the heels of robust comps and top-line growth, the year-over-year adjusted earnings per share for the full year grew 27%. This marked the fifth consecutive year of more than 25% growth in EPS. These consistent results highlight the success of its dual market strategy of serving both wholesale and retail automotive parts businesses.

Looking forward
The early onset of extreme cold weather in the center of the country and increases in average ticket fueled comps growth in the fourth quarter. In addition, total miles driven by all vehicles during October and November increased approximately 1.1%, resulting in more wear and tear in parts, according to management. The 60-basis-point increase in total miles driven by all vehicles for the full year is expected to be on the same lines in the future. This will be a growth driver going forward as consumers are holding on to their vehicles longer than before.

Going forward, O'Reilly will be opening 200 new stores in fiscal 2014. In addition, there are company specific catalysts -- the build-out of its professional business in the Western parts of the country, additional market share as the VIP stores in the Northeast gain traction as a result of additional service capabilities with the opening of the Lakeland, Florida and Chicago distribution centers -- which are expected to fuel growth in the future. These initiatives are expected to increase comps in the 3% to 5% range for fiscal 2014.

Peers performing well also
The inclement weather also helped Advance Auto to register positive comps of 0.1% in the fourth quarter, as against the earlier guidance of a single-digit decline. In its fourth quarter of fiscal 2013, it posted sales growth of 6% year over year. This revenue growth was fueled by the acquisition of BWP and new store openings during the fiscal year.

The acquisition of General Parts makes Advance Auto the largest player in the automotive aftermarket business with a coast-to-coast coverage of about 5,300 company -operated stores. This is being seen as a major development and a growth driver going forward.

Mr. Market responded favorably to this acquisition and sent shares soaring after the acquisition, but over a five-year period, the gains are still way behind O'Reilly. However, O'Reilly will need to watch the moves of its largest rival and also how AutoZone performs in the market as it has been gaining market share that it had lost earlier. Besides gaining in its commercial business, the acquisition of AutoAnything at the end of the calendar year 2012 is another growth driver for AutoZone.

Bottom line
Aftermarket retailers have performed remarkably well in the past and industry trends suggest that they will continue performing well. Out of the three, O'Reilly looks very interesting as it has posted the highest revenue growth rates of the three, despite its small size.

Renu Singh has no position in any stocks mentioned. The Motley Fool owns shares of O'Reilly Automotive. We Fools may not all hold the same opinions, but we all believe that considering a diverse range of insights makes us better investors. The Motley Fool has a disclosure policy.