I follow some pretty clever people who can cram a lot of insight into 140 characters. Once a week I curate my favorite tweets and add a little context to give you the big picture on a trending topic.

As a financial journalist, Twitter is indispensable. It's a personal wire service that I customize to suit my appetite for information; an instant way of getting breaking news. Plus I follow some pretty clever people who can cram a lot of insight into 140 characters.

So once a week I curate my favorite tweets and add a little context to help explain an emerging story. This week's big news was Facebook (META 2.53%) buying WhatsApp for $19 billion. (And yes, I fully understand that I'm using tweets to cover a story about Facebook. Rest assured that it's not a gimmick, just a coincidence.)

Acquisitions this expensive can make people a little dramatic.

WhatsApp is worth 19 Instagrams, 76 Washington Posts, or 271 Boston Globes, apparently.

Sure, $19 billion is a generous valuation of WhatsApp, but comparing its sticker price to the Washington Post or the Boston Globe just isn't fair. WhatsApp has 450 million users waiting to be monetized at very little expense to the company or the customers. By contrast, the Washington Post has a circulation of only 480,000 and operates near or at a loss. It's not really an apples-to-apples comparison.

But it's no wonder that Facebook was interested in owning the fastest-growing social media platform of all time.

Zuckerberg: "It's the only widely used app we've ever seen that has more engagement & a higher percentage of people using it daily than FB"

WhatsApp has no marketing budget at all. Word-of-mouth referrals are responsible for the nearly half billion users, but it's also why 72% of them open that app every day. By virtue of who he is, Zuckerberg can sense when customers buy in to a brand. A few years ago, anyone with a BlackBerry was a BBM person. Now it doesn't matter whether you have iPhone, Android, or Windows phone -- you'll probably end up being a WhatsApp person.

WhatsApp is inter-generational. Its brand doesn't depend on exclusivity, so parents can use it without making their kids feel uncool.

Feeling young today since I know what WhatsApp is.

And unlike its new parent company, WhatsApp didn't grow up in America. In fact it found early success in Europe and Asia.

@mattyglesias @DougHenwood me too. it's more a 'do you have international friends' thing than an age thing

Some of my closest friends live in Australia and South Africa, which is why I was familiar with WhatsApp long before the deal was announced. Unfortunately, the company hasn't released statistics on users by geographic area, so all we have is anecdotal evidence.

Yes, but is this a good buy for Facebook specifically? Fool columnist Morgan Housel has an answer to that.

@ajwester Yes, the guy who created and runs the world's largest social network understands the economics of social networks better most.

Inherent in the idea of risk is the possibility of failure. Morgan isn't arguing that this deal doesn't carry risk for Facebook, he's just saying that Mark Zuckerberg is better equipped than most to evaluate those possible outcomes.

Plus, Facebook only spent $4 billion in cash. They still have about $7.4 billion sitting in their account. Isn't this a better use of their money?

I dunno about this deal, but I instinctively like acquisition-fever over cash-stockpiling or (shudder) dividends.

Well, not necessarily. There's another side to that debate.

Dividends over buybacks and both over lousy M&A. Too much cash leads to the Bladder Theory of Corporate Finance @mattyglesias

The Bladder Theory is based on research showing that cash-rich companies will generally become less profitable over time, making management likely to, um, excrete earnings as you would through a catheter.

In the long run, $19 billion won't be the story. WhatsApp had already turned down a $10 billion offer from Google (GOOGL -0.55%) at the start of what turned out to be a bidding war (it's rumored that Google tried to match Zuckerberg's offer). In that light, a $19 billion deal with only 21% up front isn't unreasonable.

It won't even matter whether or not you think Facebook was justified in spending so much cash on one acquisition though, because these firms exist in an industry built on disruptive innovation. There's always a newer start-up; a cleaner, less buggy app; a shiny something that meets a demand we didn't know we had. Here's how much the landscape has changed in just six months: 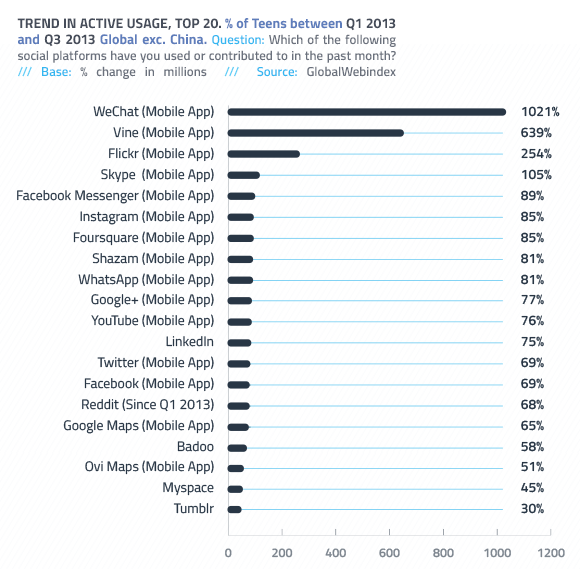 Granted, this chart only shows activity among teens, but that's the holy grail demographic in social media. All in all, this market is too transient for my taste. I'm not saying that it's a bad deal. I'm not even saying that you shouldn't invest in Facebook. I just believe that Zuckerberg made a bold move and investors with a low risk threshold should be wary of it.