Smart wearable computing is the next evolutionary stage in the way we create, collaborate, and share content.

Researchers estimate a staggering $19 billion smart wearable device hardware market by 2018. But, what if there's an even bigger market that can eclipse these figures? Pundits and researchers alike cite a rise in the popularity of wearables, but are missing something more obvious -- business productivity apps. Before declaring victories in hardware, consider the implications and results of wearables in the workforce.

From multinationals to one-person shops, business productivity software enables worker productivity around the world. Human capital consists of word documents, spreadsheets, presentations, and reports. We spend our workdays creating, analyzing, presenting, and sharing information. Enterprises often too preoccupied with IT security and Bring Your Own Wearable Device, or BYOWD, policies that some entirely overlook how smart wearables can revolutionize an office.

Smart wearable computing is the next evolutionary stage in the way we create, collaborate, and share content. This technology can potentially help mankind take a leap in productivity by fueling faster innovation while redefining the very premise of work.

At wearable conferences, we hear about the search for an app that justifies the added value of wearable technology. Plus, the utility of wearables isn't limited to specialized use cases like surgeons viewing patient vitals on Google Glass during an operation. Wearables can guide fundamental human behavioral changes in every facet of both work and personal lives. As a society, the impact could be evolutionary.

Work, for many of us, takes place in an office setting where we labor away in front of a computer. On the go or during non-office hours, we stay connected to our work via tablets and mobile phones. But, for heavy content creation, manipulation, or analysis, we must turn to the laptop. The mobile movement was supposed to free us, but instead we have given our laptops companions. Smart wearables can change this, perhaps not tomorrow, but certainly in years to come.

Offices without walls
Before following the path of wearable devices like Fitbit, FuelBand, Jawbone UP, Google Glass, and Samsung Galaxy Gear, we need a viable, wearable device for creating deliverables. Let's take, for instance, the MetaPro augmented reality 3D glasses with holographic interface, or the Oculus Rift virtual reality headset. Though still infant in its product maturity lifecycle, with its 3D stereoscopic display, LCD field of view, RGB camera, infrared depth camera, three-axis accelerometer, gyroscope, compass, and spatial controls, these have the potential to handle business productivity applications in thin air. This eliminates the need for a laptop and desk, even an office. Your environment can become virtual. Work can take place anywhere. 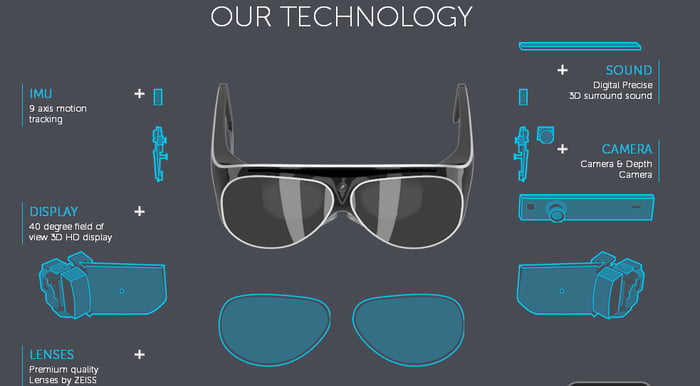 Working outside of the office, even at home, has its challenges. It's not uncommon to virtually attend an online meeting while refilling your coffee, laptop in one hand, mug in the other. All the while, you're speaking and listening on your headset. With smart wearables, multitasking becomes seamless. You can perform the same functions, but with one or more hands-free devices connected to the body.

Mobility doesn't mean light functionality
Enterprise apps on today's tablets and mobile phones are great for simple tasks, but impractical for large ones, given their small form and limited functionality.

With wearable technologies that provide an immersive experience, many physical constraints disappear. On a large, virtual ambient canvas, a user can create and view complex documents and access the full functionality of an application without being inhibited by a small form factor.

Build from the ground with wearables in mind
The user interface, workflow, and architecture of wearables were built based on a model with the traditional computer in mind. As we have seen in the ERP space, cloud innovation necessitated building from the ground up. Case in point, when it appeared that the SAP and Oracle-dominated ERP market couldn't support new entrants, Workday and other cloud solutions providers carved new opportunities in the market by capitalizing on the low total cost of ownership of cloud computing.

Some market leaders will struggle to transition away from traditional mentality. Engineers, system architecture, and business models have so much invested in the current paradigm that it will be nearly impossible to steer thsoe massive ships in any other direction. With companies like BlackBerry and Microsoft, we have witnessed the difficulties associated with attempting to reinvent oneself.

Microsoft holds nearly 90% of the business productivity software market. By contrast, less than 10% of enterprises use Google Docs and 1% use Zoho Docs. The primary driver for retaining Microsoft Office is worker productivity. Lightweight functionality is not sufficient for enterprises, even in the new smart wearable world.

Microsoft Office is only the tip of the iceberg. Enterprise productivity software is a huge market that includes content, communication, and collaboration software, CRM software, digital and content creation software, ERP software, office suites, project and portfolio management, and SCM software, to name a few.

Those start-ups courageous enough to undertake this mammoth opportunity will need to map user interactions in the new ambient context based on data-driven user empathy research. In the wearable computing world, employees can engage with enterprise productivity apps anywhere, unencumbered by a physical office space, wires, and keyboard. This will require a new way of thinking and approaching human-computer interactions.

Scott Amyx has no position in any stocks mentioned. The Motley Fool recommends Google. The Motley Fool owns shares of Google. We Fools may not all hold the same opinions, but we all believe that considering a diverse range of insights makes us better investors. The Motley Fool has a disclosure policy.