One of the most surprising trends for health care investors may be the rally in medical appliance companies including hip and knee leader Zimmer Holdings (NYSE: ZMH).

In the wake of Obamacare, investors were warned companies would face a profit cliff that would unhinge earnings and crater share prices. Yet, Zimmer's shares have marched 16% higher since health care.gov went live last fall, and shares of Zimmer's primary competitor, Stryker (SYK -0.64%) are trading at new highs too. Let's see if that optimism is warranted. 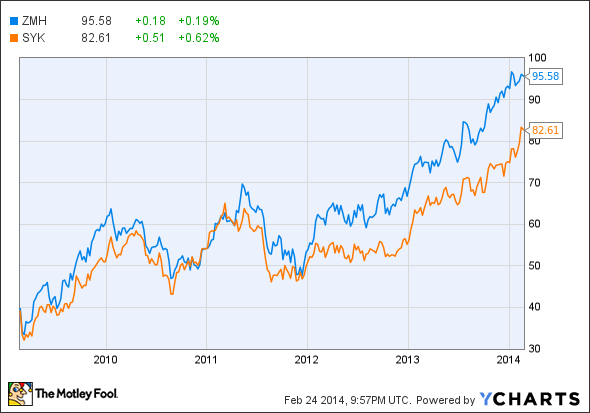 With a market share of 26% in knee replacement, Zimmer is the largest in the business, outpacing competitors Johnson & Johnson's ((JNJ -0.09%) Depuy Synthes and Stryker. Zimmer's knee sales have grown by nearly 8% to $1.9 billion between 2009 and 2013 thanks to the rebound in the number of procedures, and knee revenue grew roughly 10% year-over-year in the fourth quarter. That growth pop last quarter came thanks to a 12% jump in volume, which more than offset a 2.4% drop in prices.

Zimmer's 21% share in the hip replacement market puts it slightly behind Johnson's Depuy. However, rebounding procedure demand is lifting Zimmer's hip revenue too. Between 2009 and 2013, hip sales are up about 8% to $1.33 billion. In the most recent quarter, sales for hip products grew 2.9% year-over-year as volume improved 5%, more than offsetting price pressures.

Better days may be ahead
Zimmer's smaller businesses are growing quickly too. Its extremities segment sales are up 43% since 2009, reaching $194 million last year thanks to 11% growth in demand for shoulder and elbow products. That's an impressive advance, but more impressive is the 55% growth in Zimmer's surgical product sales, which climbed to $432 million in 2013.  Sales of Zimmer's trauma and dental products are also up double digits since 2009,   and improvement across all these businesses more than makes up for the 20% drop in spine revenue during the period.

Procedure demand may soon be swelling thanks to aging baby boomers. Active, longer-living boomers who want to maintain their lifestyle and avoid years of arthritic pain are increasingly turning to replacement surgery. A CMS study showing that between 1999 and 2007 the number of hip and knee replacements grew a statistically significant 21% and 65% among Medicare patients backs up that assertion.

That presents an opportunity for profit growth at Zimmer -- and its competitors -- given industry operating margin may have found its footing in the fourth quarter. If so, rising demand will be leveraged for a bigger bottom line. 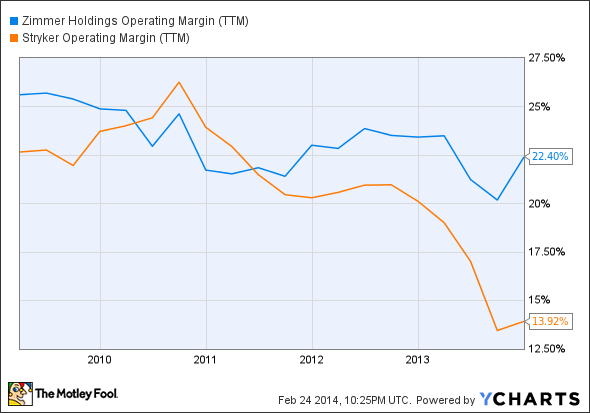 Buybacks reduced  the company's share count by 1.7 million shares during 2013, yet after paying for share repurchases and dividends, Zimmer's cash hoard finished the year north of $1 billion, up from $884 million in 2012. Short term debt fell to $0.5 million from $100 million, and long term debt dropped to $1.67 billion from $1.72 billion during the year.

The balance sheet should improve even more this year given the company is guiding for 3% to 5% sales growth and earnings per share of between $6.10 and $6.30. If the procedures head higher, it Zimmer's sales growth will more than offset the medical device tax headwind, in which case recent enthusiasm isn't misplaced.