Sony Pictures (SONY -1.37%) has struggled greatly in recent years. Flops like After Earth and White House Down lent credibility to investor calls for Sony to split off its film division. The sorry state of affairs at Sony Pictures even facilitated the rumor that the company was considering the sale of the film rights to the "Spider-Man" universe to Disney (DIS 0.85%). Given that Spider-Man movies have brought in billions, such a move would have surely signaled the end of Sony's film division as it currently exists. The fact that such rumors swelled following the 2012 series reboot The Amazing Spider-Man shows that the film was less than a resounding success.

Despite bringing in more than $752 million at the global box office, The Amazing Spider-Man failed to live up to expectations. The film stands as the lowest-grossing of the four Spider-Man films and it also failed to win the critical acclaim enjoyed by the first two movies in the Sam Raimi trilogy. Now, Sony is pushing on with its Amazing series in hopes that it can restore the franchise to previous heights. Will Amazing Spider-Man 2 become the hit that Sony's embattled film division desperately needs?

A good reason not to put 'Amazing' in your film title
The financial falloff that occurred from the last of Raimi's trilogy to the first of Marc Webb's Spider-Man films is substantial. The decline in domestic take was precipitous. Even with the explosive growth that took place in global markets, and considering figures not adjusted for inflation, Amazing Spider-Man cannot claim a box office victory over any of its predecessors. While Disney dominated 2012 with The Avengers, Sony released a movie that showed a weakening of its greatest character property.

Where does the responsibility lie?
There are a number of factors behind Spider-Man's box office deterioration. Rebooting Spider-Man after Raimi's third film hadn't always been the plan. Despite Spider-Man 3 being a notoriously difficult production, the director was originally attached to do a fourth Spider-Man movie. Series leads Tobey Maguire and Kirsten Dunst were also expected back, and John Malkovich says he would have returned to villainous form as the Vulture. Comments from Raimi indicate that Anne Hathaway would have portrayed the sultry Black Cat. Pre-release hype had already started for a fourth film in the original continuity. Reactions to a reboot were bound to be mixed.

Spider-Man 3 deserves some of the blame for the less-than-stellar introduction to the "Amazing" universe. By the time that Andrew Garfield was announced as the new Peter Parker, Spider-Man 3 had developed a reputation as a bad movie. Rumors abounded that Raimi had delivered an intentionally clunky and campy film as a reaction to unwanted studio interference. Whether or not that's true, the film property endured some tough press between installments.

Not so super
Amazing Spider-Man also faced stiff competition in its release year. 2012 belonged to Disney's Avengers and Warner Bros' (part of Time Warner) Dark Knight Rises, two films that had years of buildup before their releases and featured stronger casts. With Jamie Foxx and Paul Giamatti playing villains Elektro and Rhino, Sony has made an effort to address the "Amazing" series' star problem. Unfortunately, while both men are talented performers, neither is a huge box office draw. Foxx was last seen in Sony's catastrophic White House Down, and Paul Giamatti is still widely referred to as "that guy who was in Sideways."

Sony has been trying to steer the "Amazing" franchise to replicate the success of The Avengers. Marvel's superhero team upped the ante in terms of casting and demonstrated the value of a massive, interconnected film universe. By successfully building its lore over multiple character-centric films, The Avengers made other properties seem small in comparison. Now, Sony looks to expand the scope of its upcoming "Spider-Man" films by introducing a bevy of new villains and developing a spin-off built around Venom, the web-head's black-suited nemesis. This approach to growing the series has backfired on Sony before.

Just add villains
Sony's insistence on inserting Venom into Raimi's Spider-Man 3 was partially motivated by a desire to give the antihero his own film franchise. The character's forced inclusion royally ticked off Raimi and led to a movie that featured three villains but capitalized on little of their respective potentials. Now, the "Amazing" series will follow a similar path. 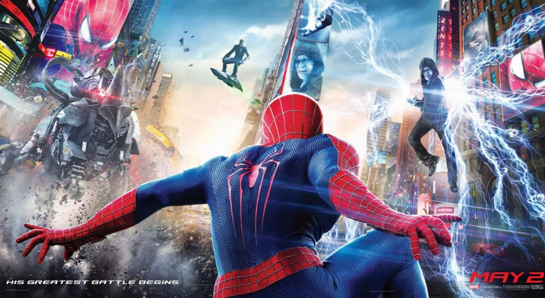 Amazing Spider-Man 2 will see the titular hero square off against no fewer than three of his biggest foes. Viral marketing for the film suggests that Venom will be introduced in some fashion, and rumors have swirled about Black Cat also making an appearance. The assembling of villains is part of the lead-in to the third "Amazing" film, which will see Spider-Man's adversaries team up to form The Sinister Six. Juggling so many villains is no easy task, however.

What was that bit about responsibility, again?
The Amazing Spider-Man 2 is a pivotal movie for Sony. After a series of flops and missteps, the company needs to prove that it can keep pace in the modern film industry. If it can't create substantial growth with the upcoming films in its "Spider-Man" universe, Sony will lend great power to the critics who hope to split off the company's film division.