Please ensure Javascript is enabled for purposes of website accessibility
Log In Help Join The Motley Fool
Free Article Join Over 1 Million Premium Members And Get More In-Depth Stock Guidance and Research
By Andrés Cardenal – Feb 27, 2014 at 11:46AM

SodaStream is having a tough year, but the company is still growing at a considerable speed and valuation looks quite attractive. Is it the right time to invest in SodaStream?

SodaStream (SODA) is having a tough year, and the alliance between Coca-Cola (KO -0.38%) and Green Mountain Coffee Roasters (GMCR.DL) represents a considerable risk for the company. However, SodaStream is still generating substantial growth and disrupting the gigantic carbonated drinks market. Besides, the stock is trading at attractive valuation levels. Is it the right time to invest in the home soda pioneer?

Still sparkling
The company had already warned investors about the tough holiday quarter, so expectations were quite low leading to the report. That's the main reason both sales and earnings came in above expectations when the company announced results on Wednesday, even if profit margins were under heavy pressure during the period.

The holiday season has been notoriously tough in terms of pricing, and SodaStream is prioritizing household penetration over profit margins. In addition, alternative distribution channels like the Home Shopping Network produced extra pricing pressure during the quarter.

On the other hand, the company is still generating substantial unit growth, starter kits sales increased by 39%, units of carbonator refills grew 25%, and flavors units were up 32% during the quarter. Starter kits sales are encouraging in terms of showing that the company keeps gaining more clients, but growing sales of consumables are perhaps more important as it reflects active consumption from customers, and consumables also carry far higher profit margins than starter kits.

SodaStream is still successfully expanding and disrupting the worldwide carbonated beverage industry, which management estimates to be worth around $260 billion, so the company has enormous room for growth in the coming years if it continues moving in the right direction.

Coca-Cola bought a 10% stake in Green Mountain Coffee Roasters, for $1.25 billion. The companies have also signed a 10-year agreement to collaborate in the development and introduction of Coca-Cola's products for use in Green Mountain's forthcoming Keurig Cold machine, which is expected to be launched during the company's fiscal 2015, beginning in October 2014.

Coca-Cola is the undisputed global leader in soft drinks, and the fact that it has chosen to align with Green Mountain represents a reason for concern for SodaStream investors.

On the other hand, this move could also provide validation for the home soda category, and Coca-Cola is unlikely to choose a low price strategy to compete, so this could turn out to be a positive factor for SodaStream in terms of margins.

It's far too early to tell how the competitive dynamics between SodaStream and Green Mountain's new products will play out, but it doesn't need to be a negative for the company. It is, however, a considerable source of uncertainty to monitor.

Buying opportunity?
Falling profit margins and increased competitive pressure mean that SodaStream is becoming a more risky investment lately. However, this uncertainty seems to be already reflected in the stock price since SodaStream is trading at attractive valuation ratios from a historical perspective. 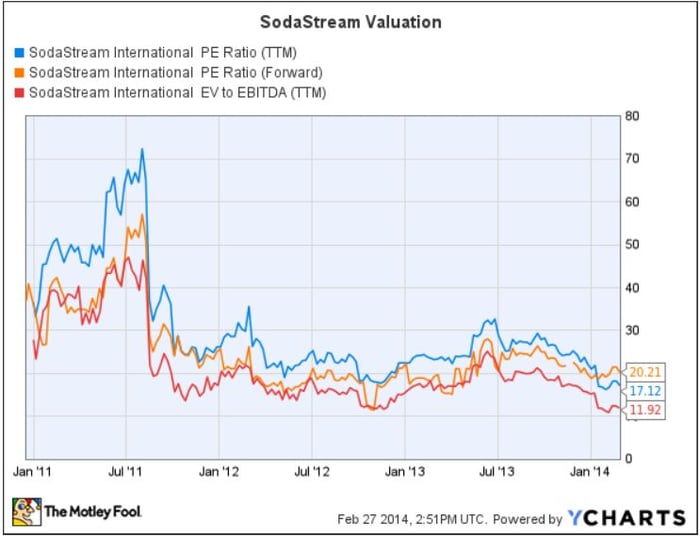 As long as the company continues generating growing sales and gaining market penetration, there are valid reasons to expect recovering profit margins, especially if management leaves recent mistakes in the past. Under such a scenario, SodaStream could offer substantial upside potential.

Bottom line
SodaStream is going through a challenging period, and competition is an important risk to monitor in the medium term. However, the company is still on the right track when it comes to capitalizing on opportunities for growth in the gigantic carbonated beverages industry, and valuation is quite attractive at current levels. The company's recent setbacks could easily turn out to be a buying opportunity for long-term investors.

Is SodaStream Stock Punching Out Too Soon?
349%